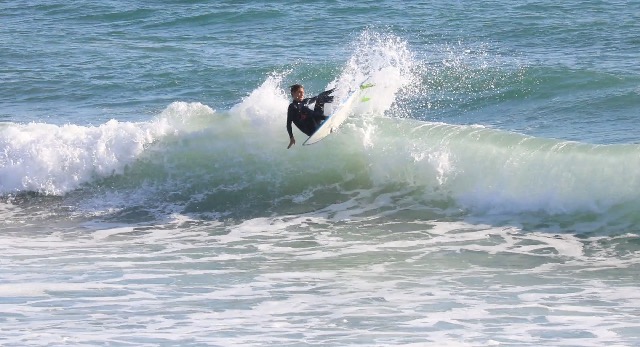 Grom of the Week: Rece DeLorenzo

Rece DeLorenzo is a quick learner. At 14, the San Clemente kid first took to the waves only four years ago, and he’s already parlayed that into early surfing success.

But his good start hasn’t only come because of his natural talent—he’s worked hard and already caught the eye of local sponsors, surfers and trainers.

“I work out at Foundation fitness,” Rece said. “I do that twice a week. Then I surf before school, after school and three to four times a day on the weekends.”

Rece said he “didn’t even know how to surf” when he first went to the Hurley Pro four or five years ago, but after seeing local pros do well, he was inspired to get going. He bought a used surfboard and the rest is history. Now he competes individually and also with the Shorecliffs Middle School team.

He trains with Brandon Phillips at VERT Performance in San Clemente—where he also held a birthday party recently—and has got his eye set on some big surf goals: This year, he wants to train and make the Surfing America Prime series, and hopes one day he can surf professionally on the Championship Tour.

In the meantime, you can catch him competing in other WSL and NSSA events in the area, doing what he loves most: competing out on the waves.