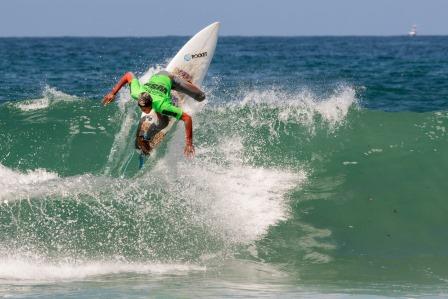 Grom of the Week: Namor Cayres

Namor Cayres, 17, came to San Clemente from Brazil in January in search of better opportunities in surfing and in school.

He made the trip on his own, moved in with family friends and enrolled as a junior at San Clemente High School. His late arrival prevented him from trying out for the school surf team, but he intends to give it a go next year. Since he’s been here, he has surfed every day with the school team, surfs Lowers as much as possible and competes in Western Surfing Association and Soul Surf Series events in an effort to continue to advance his skills.

“It is cool to be able to chase my dreams here,” Namor said. “I thank my family that supports me a lot. And I have to thank my sponsors in Brazil for their help, too—Rocket Surfboards and Ozzie & Mambo Palace.”

With only the last three events of the season under his belt in WSA Boys U18 competition, Namor is currently the No. 18-ranked surfer among a total field of 71. He took his first U18 win last month in Dana Point at Salt Creek Beach. In the Open Men division, Namor is ranked No. 17 of 64 with only two events, one being a win at the March Oceanside event.

“My main goals are to get a sponsor that will help me do the pro juniors and the QS,” he said. “I am here to try my best to be a pro surfer, and to finish high school.”

Despite English being his second language, Namor is earning As and Bs in school and would like to continue on to college after graduation. He was surprised to learn that unlike Brazil, where a good test score earns students a free college education, getting a degree in the U.S. is expensive. It is a realization he said is concerning, but living in Southern California still has plenty of benefits.

“I love living in San Clemente because the waves are great, I’m meeting new people, working on my English and surfing Lowers as much as I can,” he said. “Right now I’m working on my turns—doing big carves and working on my rail game.”

When not riding waves or studying, Namor also enjoys playing chess and skateboarding.

“Back in Brazil I would do a lot of surf training and Jiu-Jitsu training too,” he said. “Here I also babysit the five-year-old boy of the family I am living with. He is cool; I try to be a good role model for him.”

“San Clemente people seem like they are very happy every day,” Namor said. “They are good people who made me feel really welcome, and there are some kids who surf a lot. That pushes me to get better. I have a lot of friends already in school, people with good hearts.”

Although Namor says he sometimes misses home, he is having a great time in his new city, working toward his dream of becoming a pro surfer.

“I am just happy always here,” he said. “Yes, sometimes I get sad when I lose in a contest, but I just try to learn from my mistakes and fix things for the next contest. When my strategy works, I just try to keep it flowing though all my heats.”