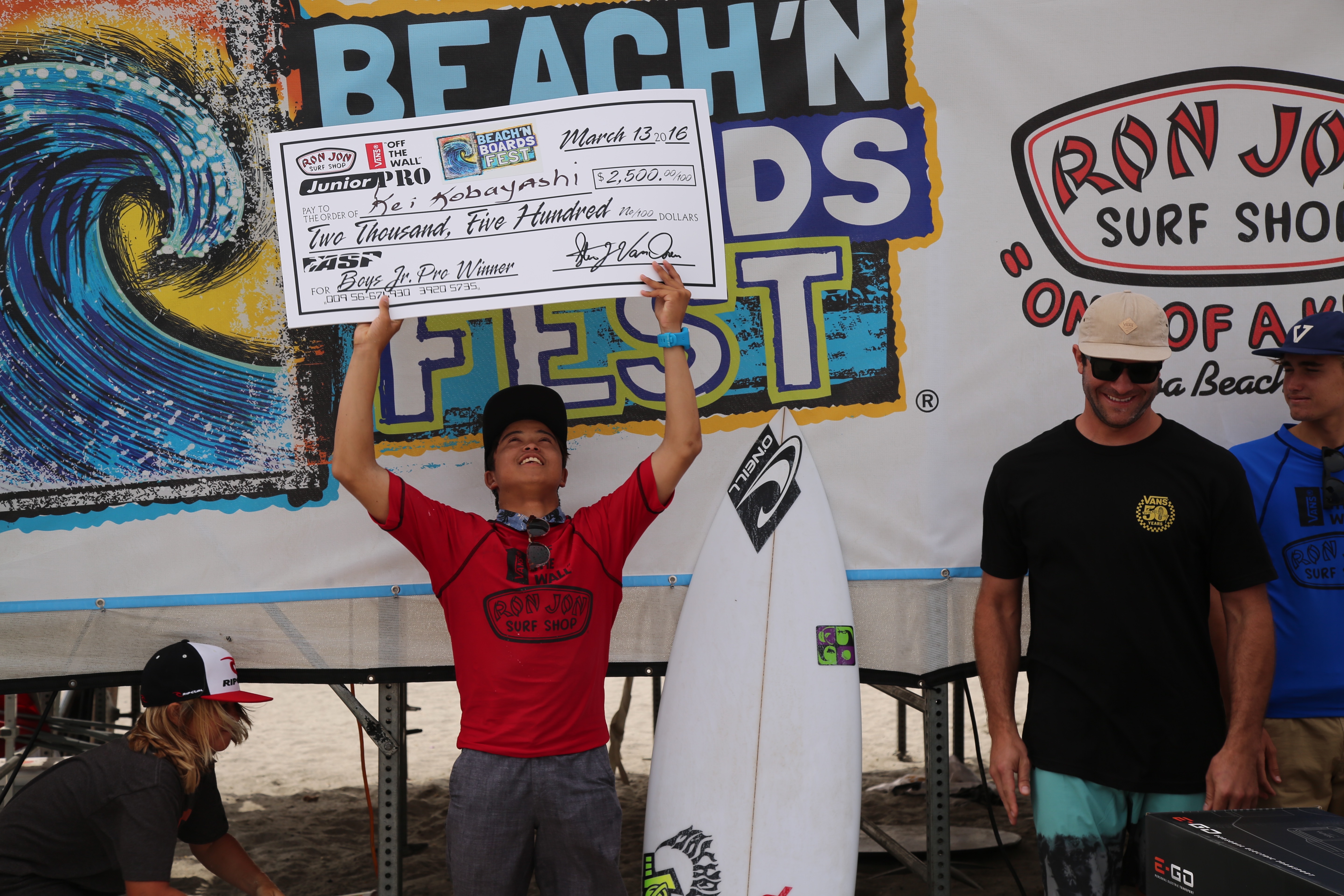 Kobayashi, 17, emerged victorious at the WSL Vans Junior Pro in Cocoa Beach, Florida on March 13. The win, he said, was a product of hard work, good equipment, support, confidence and hospitality.

“It all came together for me in the final,” Kobayashi said. “It felt like everything was going my way. My surfboard was working. My new Matt Biolos (Lost) board felt great all week. I stayed with the Colemans (the family of fellow surfer Tommy Coleman) and their hospitality was great. They really made me feel welcome. I’d really like to thank them for that. And I couldn’t have done it without my sponsors and my support crew back home.

Earning the highest heat score of the event, a 17.83 with a 9.83 and an 8.00, Kobayashi comboed the field for a comfortable win over runner-up Cocoa Beach local Chauncey Robinson. John Mel (Santa Cruz) earned a third-place finish and Che Allan of Barbados took fourth.

“Everyone was surfing well all week, and the final was stacked,” Kobayashi said. “With Chauncey, a local used to surfing this kind of mushy waves, I knew it was going to be tough. I just tried to stay really busy and focused during the heat.”

“I got some comments about how wide it was, but it worked,” he said. “Making it out of my first heat definitely made me feel like I had the right board under my feet.”

Kobayashi also talked about preparing his body for the start of the WSL Junior Tour in an effort to kick off the season with a good result and eventually make it to this year’s world championship.

“I really want to make it to the Pro Junior World Champs this year and I’ve been working really hard in the water and training at DSC Performance, to be ready for this,” he said. “And then I ended up sick at the beginning of last week and couldn’t surf much right before the event. But by Thursday I started to feel better and I’m stoked that my hard work paid off and carried me through. The last couple of years I didn’t even make it out of the first round, so making my first heat really gave me confidence and momentum.”

Kobayashi will turn 18 in November, making this his last year of Pro Junior eligibility.

“I’m really happy with my surfing right now,” he said. “I train every day when I’m home. There are eight events in the North American series, and I really want to be in top form and get a chance at World Juniors because it’s my last year on the junior tour.”

Kobayashi arrived home on Tuesday for a day off before jetting off to Hawaii for the Pipeline Pro Junior, the start of a two-month stint away from home.

“Pipeline doesn’t count as a North American Pro Junior event but I want to go there for practice,” he said. “I can’t get points for this region but I can win prize money. But really I just want to get out there with three other guys and surf Pipe because it’s a great opportunity I don’t want to miss.”