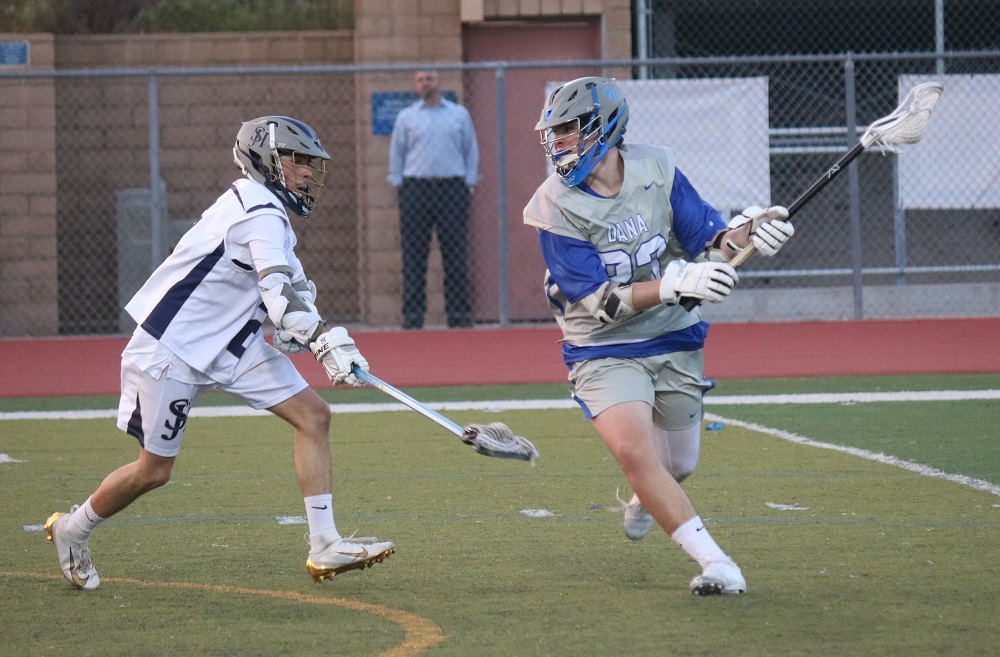 The Orange County lacrosse community is a close-knit one, and first-year Dana Hills coach Trent Cooper is proof of that.

Cooper was the coach at Mission Viejo High last season but resigned and came over to Dana Hills in the summer. Cooper took over for Chris Iltis, who in turn took over at Mission Viejo. Cooper called it a weird coincidence and didn’t know of the change until the Dolphins scheduled the Diablos for their league opener, which Dana Hills won, 17-5, on Feb. 27.

Cooper also comes from a lacrosse family and is more than familiar with the Sea View and South Coast Leagues. His mother and brother started the lacrosse program at Aliso Niguel, where Cooper played for three seasons.

“Dana was our biggest rival,” Cooper said. “It was weird to switch, but now, I’m all about that Dolphin pride.”

Cooper was brought to Dana Hills by assistant coach Joe Kuao, who is a longtime teacher at Dana Hills.

“We had this goal in mind that we wanted to bring lacrosse back to Dana,” Cooper said of Kuao. “Grow the program, grow the youth program, bring back that Dolphin pride.”

That oft-mentioned pride has manifested itself in the 2019 Dolphins season with a noticeable uptick in the offense and success in the win column.

Dana Hills is scoring more than three goals more per game on average compared to last season, 11.9 to 8.3 goals per game, and has been held under 10 goals only once in 10 games. The Dolphins scored fewer than 10 goals in 12 of 19 games last season.

“We have a lot more older, veteran varsity players,” junior long-stick midfielder Mitchell Stock said. “So it’s comfort with each other.”

The Dolphins are 7-3 overall, 3-1 in the Sea View League and in the thick of the league race. Dana Hills was 9-10 overall and 1-7 in league last season.

“They had a rough season last year, but we have a lot of talent, tremendous amount of talent,” Cooper said. “Once they start putting it all together, they’re going to do great things. It’s all about getting them to believe in themselves, getting someone to believe in them.”

The Dolphins believe they are a team of shooters. Offensively, they are led by senior Luke Perry and juniors Sam Martin, Tyler Hubbard and Mason Morrow.

Dana Hills’ “grip it and rip it” mentality was on display on Tuesday, April 9 at San Juan Hills. The Dolphins looked on their way to a disappointing league defeat, down 10-6 late in the fourth quarter, but rallied to score six goals in the final five minutes to pull out the win, 11-10.

Dana Hills is a half-game behind rival Aliso Niguel and dropped their first meeting, 11-10, on March 19. Dana Hills gets its shot at revenge, pride and the top of the league at Aliso Niguel on Thursday, April 18.