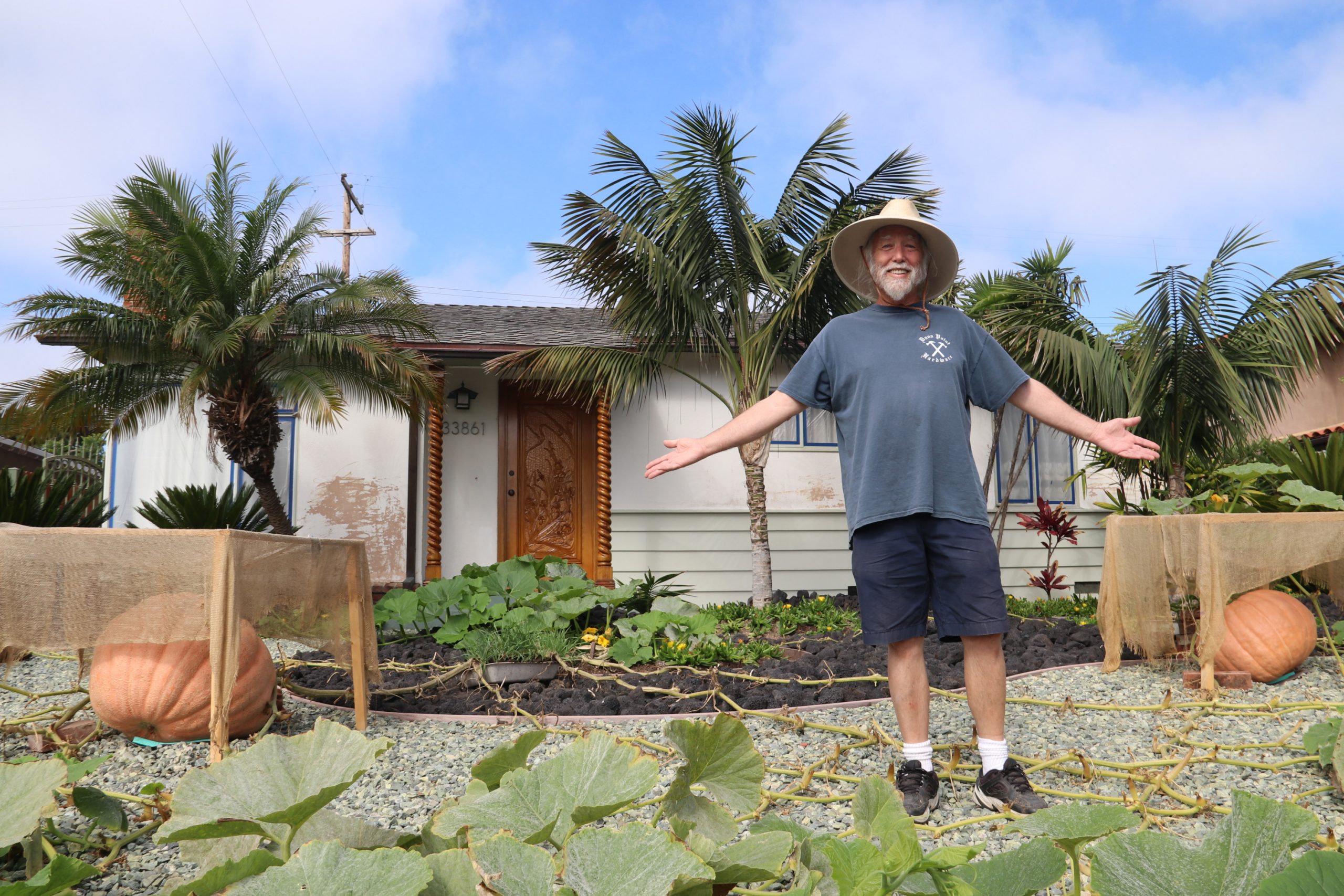 A growing pumpkin faces many enemies: insects, gophers, mildew, destructive teenagers. It takes a pumpkin guardian, like Bill Lane, to see a gourd through to its final stages.

“Twelve years ago, I sent away for giant pumpkin seeds from that year’s national champion.  I planted one in the front yard and waited to see what would happen,” Lane says. “In 90 days, I had a 160-pounder.”

Every year since, Lane has grown giant pumpkins at his Lantern District home in Dana Point. The heaviest pumpkins have weighed in at as much as 200 pounds.

Planting the pumpkin seeds usually begins in May or June. The trick to growing a larger-size pumpkin is to regularly pluck the vines of all but one pumpkin. This way, the energy and nutrients are concentrated in one pumpkin on the vine. Lane says it requires plenty of diligence and work, but the outcomes are worth it.

“Pumpkins make people smile. They fit into that precious realm of things that make you happy; like cotton candy, ukuleles, and elephants,” Lane says.

People from all over the neighborhood stop by to see the pumpkins’ progress. During a past pumpkin season, a neighbor who worked at R.H. Dana School Exceptional Needs Facility (ENF) asked if she could organize a field trip for her students to see the pumpkin patch.

On a clear, brisk October morning, a group of about 40 people, including school children with severe disabilities, parents, and teachers made the pilgrimage to see the pumpkin. Some children sat in their wheelchairs, others sat on the grass, and some were on bales of hay. They drank apple juice and were surrounded by the huge leaves of the vine and the giant pumpkin.

“That was one of my favorite memories,” Lane says. “Admirers are everywhere—little ones on their way to school, people walking their dogs, even the Dana Hills Girls Track Team runs by and looks. Big, burly construction workers slow down to pay homage and give a ‘thumbs up.’”

In 2012, Lane says a few children in a car passed by and noticed the burlap “house” that he put up to protect the developing pumpkin, and thought it looked like a manger setting. They deemed the fruit, “Pumpkin Jesus.”

This year, Lane is growing two large pumpkins in the front yard and one in the backyard. He plans on doing a pumpkin carving on Oct. 29 at his Blue Lantern home.

People in the neighborhood are fascinated by the pumpkin plant, and they often stop to share their observations—changes in color, shape, vine direction, blooms, and of course, the increasing growth of the pumpkin.

“I hear of recipes for pumpkin soup, pumpkin pie, roasted seeds, and stuffed flowers,” Lane says. “Growing a giant pumpkin creates a sense of community, and with it, I feel a social responsibility to take good care of the pumpkin plant. It is a lot of work, but well worth the time and effort.”