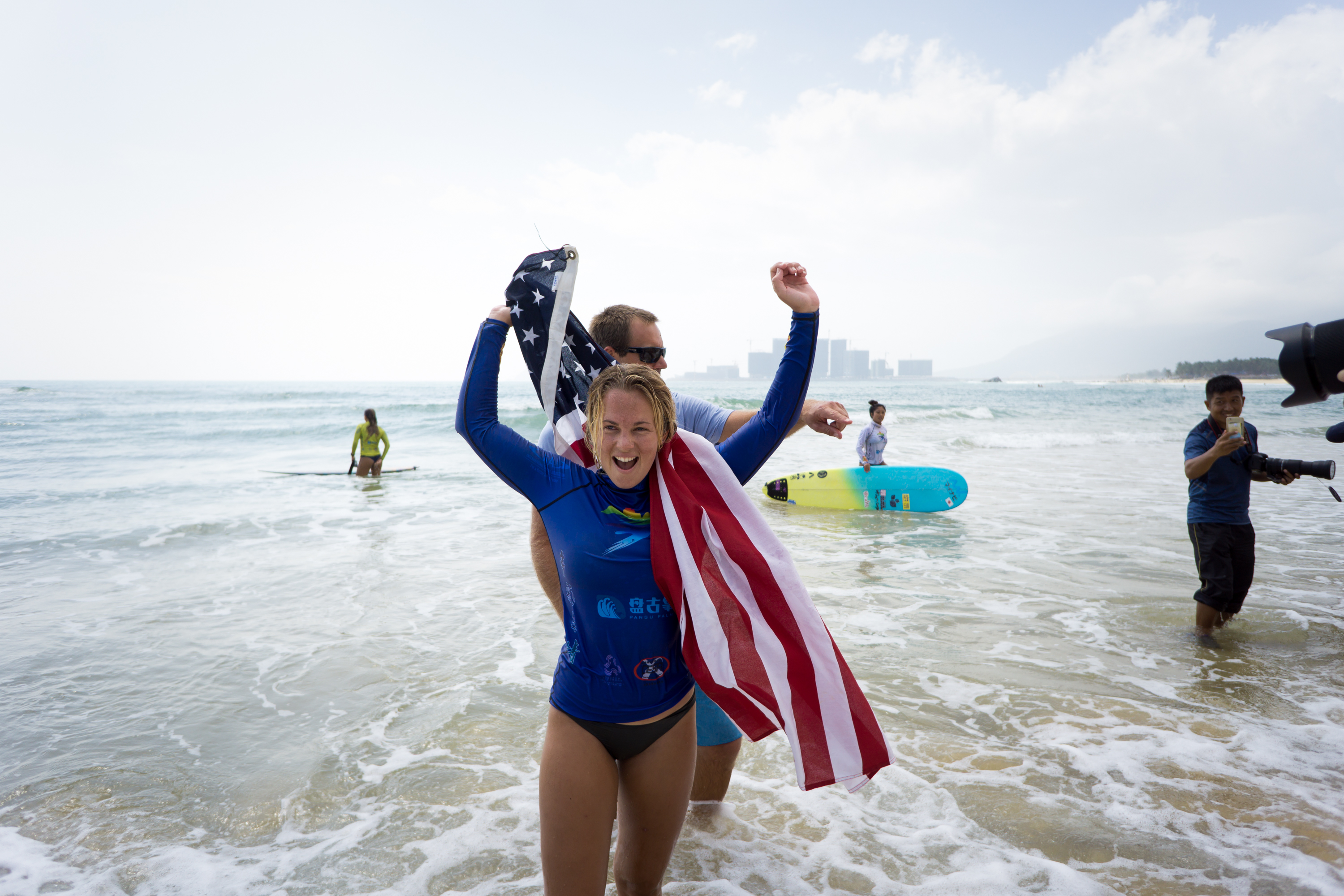 By Jake Howard
The United States national surf team is celebrating its first-ever team gold medal after running the table at the 2018 ISA World Longboard Surfing Championship at Riyue Bay in Wanning, China.

A lion’s share of the credit goes to local Orange County surfers. San Clemente’s Tory Gilkerson, who won the women’s division, and Dana Point’s Rachael Tilly led the charge in the competition’s Aloha Cup, and Kevin Skvarna, from San Juan Capistrano, came away with a copper medal in the men’s division.

“It was such an amazing experience,” said Gilkerson, who caught up with the San Clemente Times this week after returning home from China. “The team camaraderie was so much fun. It was my first ISA Longboard Championship, so it was all new to me. We were high-fiving, waving flags. It was definitely a team effort.”

The U.S. team was comprised of four surfers—the only one of them not from South Orange County was North Carolina’s Tony Silvagni. All four surfers got off to a hot start at the onset of the contest, blitzing their way through round after round.

“There were days our team was surfing 10 or 15 heats, it was pretty intense,” said Gilkerson.

With the swell on the decline, the contest was on hold midway through the waiting period. Call it fate, but the timing couldn’t have been better. Gilkerson was hit by a stomach flu that laid her low for a couple of days.

“It was pretty rough, but the team rallied and took care of me. By the time the contest was back on, I was feeling pretty good,” Gilkerson continued.

By the time the final day rolled around, the Americans held a slim lead over the rest of the world. The Australian team only trailed the U.S. by 410 points and it was still very much anybody’s game. When Aussie ace Declan Wyton was knocked out of the contest, the door swung wide open for the U.S.

Silvagni and Skvarna found themselves in the same elimination heats three times throughout the contest, but by deftly applying team tactics, both were able to advance all the way to the final. They came away with bronze and copper medals, respectively, in the men’s division.

For the women, Tilly stumbled in the main event while Gilkerson kept marching forward. Reveling in the unique Chinese surf heat after heat, the San Onofre aficionado surfed in fine form during the event.

“It was so cool to be part of the U.S. longboard team winning their first gold medal,” said Gilkerson, quick to give credit to the rest of the squad.

“We were coached by longboard world champ Colin McPhillips, and he had so much insight and experience to share. I felt like I was learning something new all the time,” Gilkerson added. “And Greg Cruse (Surfing America CEO) showed up with a suitcase full of snacks and jars of peanut butter and jelly. He was making sandwiches and cheering everyone on. It was a really special experience.”

In the end, the U.S. came away with the gold while Peru finished second. Hawaii claimed the bronze and Brazil rounded things out with a copper medal. The Aussies slipped all the way down to sixth, finishing behind the U.K.

All told, it was a good week of waves and relatively friendly competition in China, and with the 2020 Olympic Games in Japan only two short years away, things are definitely coming together for the international surfing community.

“ISA World Longboarding is back! What an amazing week!” the ISA’s Robert Fasulo said in a statement. “There is no doubt that Riyue Bay has delivered as an epic venue for world-class longboarding. The ISA’s vision is simple—we want to create a better world through surfing.”