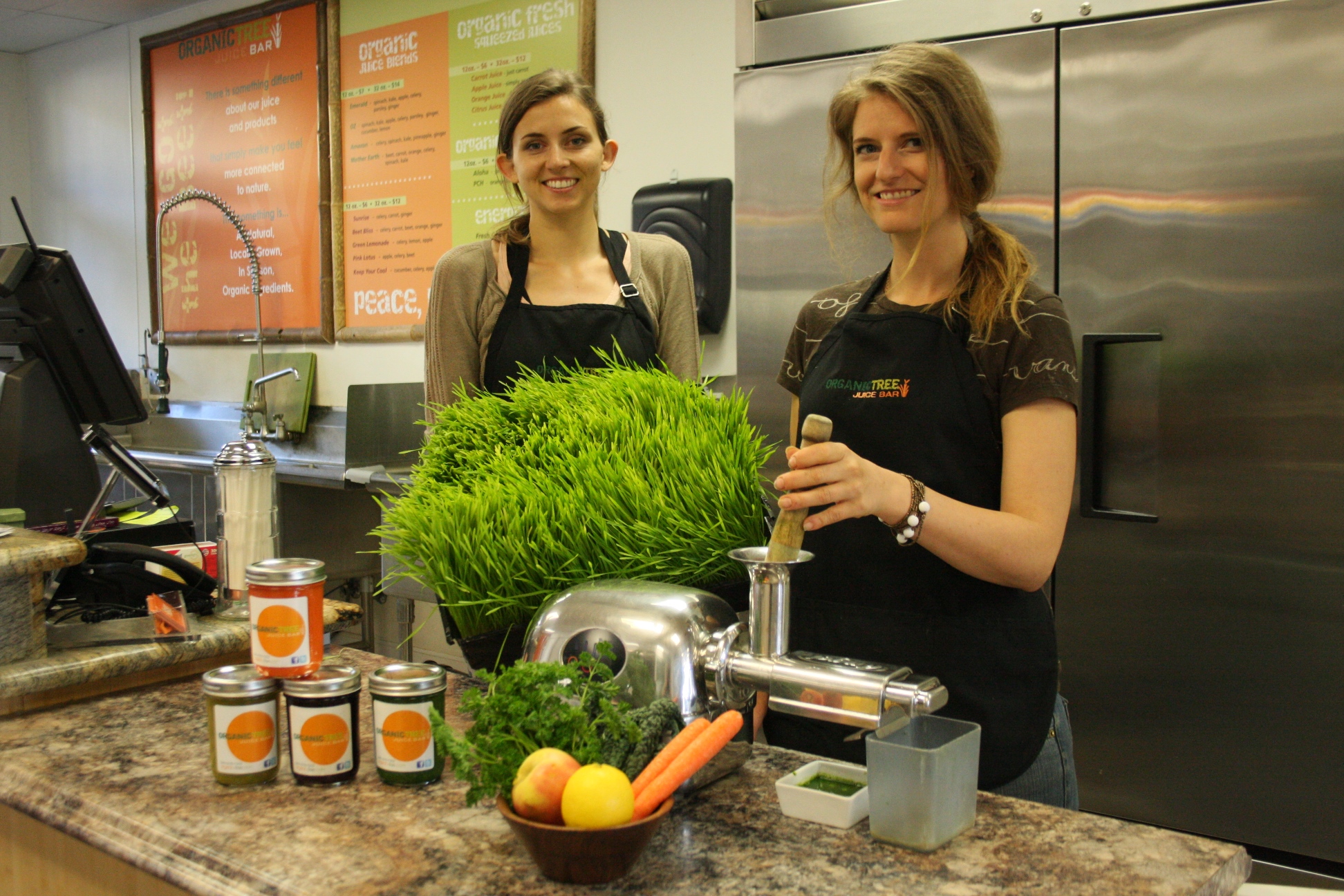 By Brian Park and Andrea Swayne

The tri-city area of San Clemente, Dana Point and San Juan Capistrano is home to a business community full of environmentally-friendly businesses. So, as part of this year’s Green Issue, we are taking a look at one from each of our three cities “greening” the local business scene.

Unlike many juice bar chains, Organic Tree Juice Bar in Dana Point takes an artisanal approach to their products and an environmentally responsible approach to production, packaging and food waste disposal.

Started in 2011 by Brian and Rachel Dunn from Capistrano Beach, the juice bar is located in the back of the Pacific Ashtanga Yoga Shala near Dana Point Harbor.

“Many of our competitors start with ready-made blends,” said Rachel Dunn. “We start with only raw, organic materials and know where all of our food comes from.”

Dunn said the idea for the juice bar was first hatched by her husband Brian , who has been a wheatgrass, natural foods and yoga enthusiast for years. And while the two were developing their concept for Organic Tree, they worked to create a company that would incorporate the most sustainable methods of operation and the best organic products they could find.

“We make sure to buy as much of our organic produce as we can locally and found one of our main suppliers in San Juan Capistrano, South Coast Farms,” Dunn said. “Sourcing close to home also cuts down on transportation costs and the related pollution it creates.”

The idea of farm-to-table food and environmentally friendly practices, carry across the company’s entire operation. Juices are served in either compostable cups made from corn starch or reusable glass jars. And the pulp by-product created in the juicing process is returned to South Coast Farms, to be used as compost.

Organic Tree has become a favorite gathering spot where health- and environmentally-conscious locals meet, converse and enjoy the benefits of juicing, a subject that the well-educated staff has an impressive knowledge of.

“Our employees are super mindful and want to do things the right way, the green and healthy way,” Dunn said. “Not only because their bosses say so, but because they feel an inner responsibility.”

The Dunn’s will soon be expanding their business to include a new venture, Organic Tree Landscaping, focused on chemical-free, eco-friendly organic landscaping.

In 2009, after 30 years as a hairdresser, Marianne Taylor decided to make a style change of her own by turning her passion for gardening into her new life’s work.

With help from a business partner, Taylor started Goin Native, a series of gardening classes from a small property near her home in the Los Rios Historic District in San Juan Capistrano.

“The mission statement is to get people aware of sustainability and get them involved in the garden,” Taylor said. “I call myself a teacher and a ‘dirt therapist’ because you learn a lot about yourself when you get your hands in the dirt.”

But along with classes on planting succulents and cooking organic foods straight from the garden, Goin Native also provides a public service in the form of some generous green thumbs.

Twice a month, Taylor leads a group of eight to 15 volunteers, known as the Garden Angels, to Los Rios Park, where they do the lion’s share of the work in looking after more than 50 plant species in the 6.5-acre city park.

Since Goin Native started at the same time the park opened, Taylor and her small army of dedicated volunteers have spearheaded many of the landscape changes to the park, specifically in the area surrounding the Montanez Adobe.

“The look that we wanted was to plant it in such a way that it was just designed naturally without human hands,” Taylor said.

Most of the plants in Los Rios Park are native or drought tolerant species. In addition to California poppies, the park also boasts buddleia, Cleveland sage, purple sage and a variety of succulents.

In recent years, more succulents and drought tolerant plants have been introduced due to severely less rainfall, according to Taylor. Parts of the park feature a timed, drip system to water plants, but an unusually dry winter season has forced Garden Angel volunteers to use garden hoses more often.

“The plants rely on local rains, but unfortunately, we’re in the middle of a drought, so we’ve been giving them a hand up,” Taylor said. “We’ve also added a few more aloe vera plants because they need a little less water than the drought tolerant plants.”

The Garden Angels have also taken it upon themselves to boost the dwindling numbers of Monarch butterflies and bees. In the case of the butterflies, volunteers have planted milkweed, which is the primary food source for Monarch larvae, or caterpillars.

“We really want the Monarch butterflies to be a specialty here. They’re a migratory species, so we want them to find a pathway here and call San Juan Capistrano their home, just like the swallows,” Taylor said.

Taylor said the Garden Angels intend to add another day in Los Rios Park to their monthly schedule by bringing the city’s youth groups into the fold. However, with plans to look after the entire park and the beltway leading into the neighborhood from Del Obispo Street, the group can always use more help.

For more information about Goin Native or to volunteer with the Garden Angels, visit www.goinnative.net.–BP

Frustrated by a declining real estate market, in 2007 San Clemente resident Michael Laub made a decision to ditch his career as a real estate broker in favor of a new, environmentally friendly venture.

As an entrepreneur, Laub said he felt the need to reinvent himself and write his own ticket. He did just that when creating CNG United, a company focused on the conversion of conventional gasoline-powered vehicles to compressed natural gas and teaching automotive technicians how to convert and repair CNG-powered automobiles.

“I wanted to go into something environmentally friendly and considered solar power, wind power and artificial turf before stumbling across natural gas. I had my ‘ah-ha moment’ that year when gasoline prices topped $4 per gallon and natural gas was only 83 cents per gallon,” he said.

Laub said the idea really took hold when he learned that “natural gas is the first by-product that comes out of the ground when drilling for petroleum, is 80 to 90 percent cleaner, less expensive and an abundant resource right here under U.S. soil.”

Since opening its doors, CNG United has educated nearly 400 technicians on the ins and outs of conversion and that number continues to grow by 15 to 20 per month.

As a general rule, a conversion costs somewhere between $4,500 to $5,000, depending on the vehicle, engine size and the size of tank chosen, according to Laub.

“Big savings in fuel costs add up and the conversion quickly pays for itself. And with the new technology, vehicles maintain the same relative ‘gas’ mileage and performance,” he said.

Technicians visit San Clemente to learn how to convert and repair CNG cars and the company also holds off-site training sessions and has handled conversions for many municipalities and companies.

Recent in-state work includes the conversion of five ambulances in Long Beach, a plumbing fleet in Rancho Santa Margarita, the replacement of about 50 CNG tanks for the city of Hawthorne’s municipal fleet and numerous private-party conversions and tank replacements.

Next month, Laub’s company will be working with the city of St. Louis, Mo. to provide mechanic training through a program dubbed The St. Louis Project, created to help war veterans and prisoners learn a new, marketable skill.

“We’re also working with a couple of federal prisons in Florida, where we will teach the instructors in the prison how to train the inmates to convert cars,” Laub said. “The benefits are twofold. Not only will prisoners have a marketable skill upon release, inmate labor costs pennies on the dollar and during their time in jail these new skills can be used toward converting the prisons’ fleet of vehicles.”

The mechanic training program also provides curriculum to other auto mechanics programs from the high school to college level.

Wayne Richardson, a Colorado-based auto technician of 25 years and recent CNG student said learning this skill has become a necessity in his business.

“This is the wave of the future. Our fuel consumption in this country demands that we move toward this technology. Many, many of my customers are inquiring about it right now,” Richardson said.

“Based on motor vehicle department reports that show the group of over 150,000 registered CNG vehicles in the U.S. continues to increase along with demand for our training program, the way I see it, we have plenty of room to grow,” Laub said.

For more information about CNG United, visit www.cngunited.com —AS