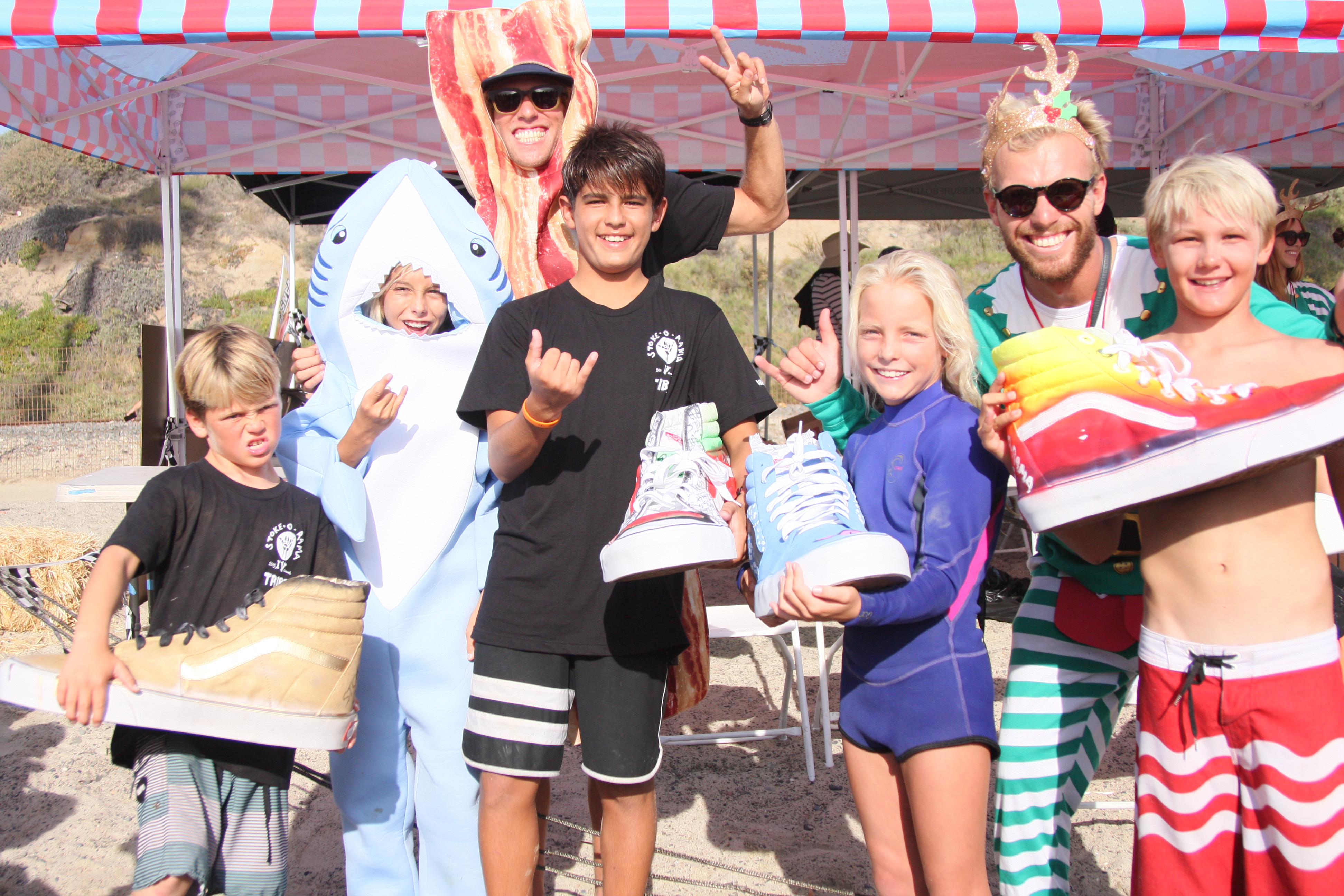 A group of 125 local groms ages 12 and under gathered with surfboards and Halloween costumes, giving it their all at the Gudauskas brothers’ fourth annual Stoke-o-Rama surf contest, Saturday, Oct. 24, at T Street.

The lineup, up by 25 surfers from years before due to increased interest, is a free, locals only surf event presented by San Clemente-based pro surfers Dane, Patrick and Tanner Gudauskas and family, to bring youth together to enjoy a fun day of surfing while raising money for the Positive Vibe Warriors Foundation which then donates the net proceeds to the city of San Clemente’s Junior Lifeguards scholarship fund. Each year, so far, the Gudauskas brothers have made a $10,000 donation to the city’s Junior Lifeguards program along with donations from the community gathered at the event.

With great waves—glassy and overhead for even the tallest of the groms—and beautiful summer-like weather all day, the beach was crowded with families of the competitors as well as a selection of former Stoke-o-Rama competitors who have aged out of the competition.

“Every year Stoke-o-Rama somehow has the magic for conditions and today is no exception,” Dane Gudauskas said. “It’s super fun—especially the 8 and under—seeing all the families come together. I think the camaraderie is getting stronger every single year and seeing the kids cheering for each other, smiling and having a great time is perfect.”

Makai Bray, who won the Pops & Pups 8U division, agreed.

“This day is awesome and it feels great to win,” Bray said. “I’m so stoked I got a big shoe! My best wave was my last one. I got four cutties and a big hit.”

The “big shoe” Bray spoke of, was a giant Vans high top sneaker, provided by the event sponsor as first-place trophies.

Bray’s enthusiasm was matched by his fellow competitors—pretty much across the board, win or lose—in both surfing and the costume contest.

With this year’s event being so close to Halloween, Dane Gudauskas—dressed as a giant piece of bacon—told the crowd the addition of a costume contest was inspired, not only by the calendar, but also by the annual Timmy Dowell Classic memorial surf contest.

“The greatest part of the Timmy Dowell is the camaraderie, like in this event, and the killer costume contest,” he said. “So we thought, why not carry on the spirit of Timmy here today, and you guys rocked it.”

First place in the costume contest went to Joey Madison, dressed as a great white shark.

Tanner Gudauskas—who dressed as Santa’s elf for the costume contest—said this year’s event owed more than perfect weather and waves to its success.

“This year we worked with Jake Dowell as the contest director so for us it’s a little bit of a different flavor,” he said. “He has been a huge help in running it and I feel like this has been our best year yet. We’re stoked.”