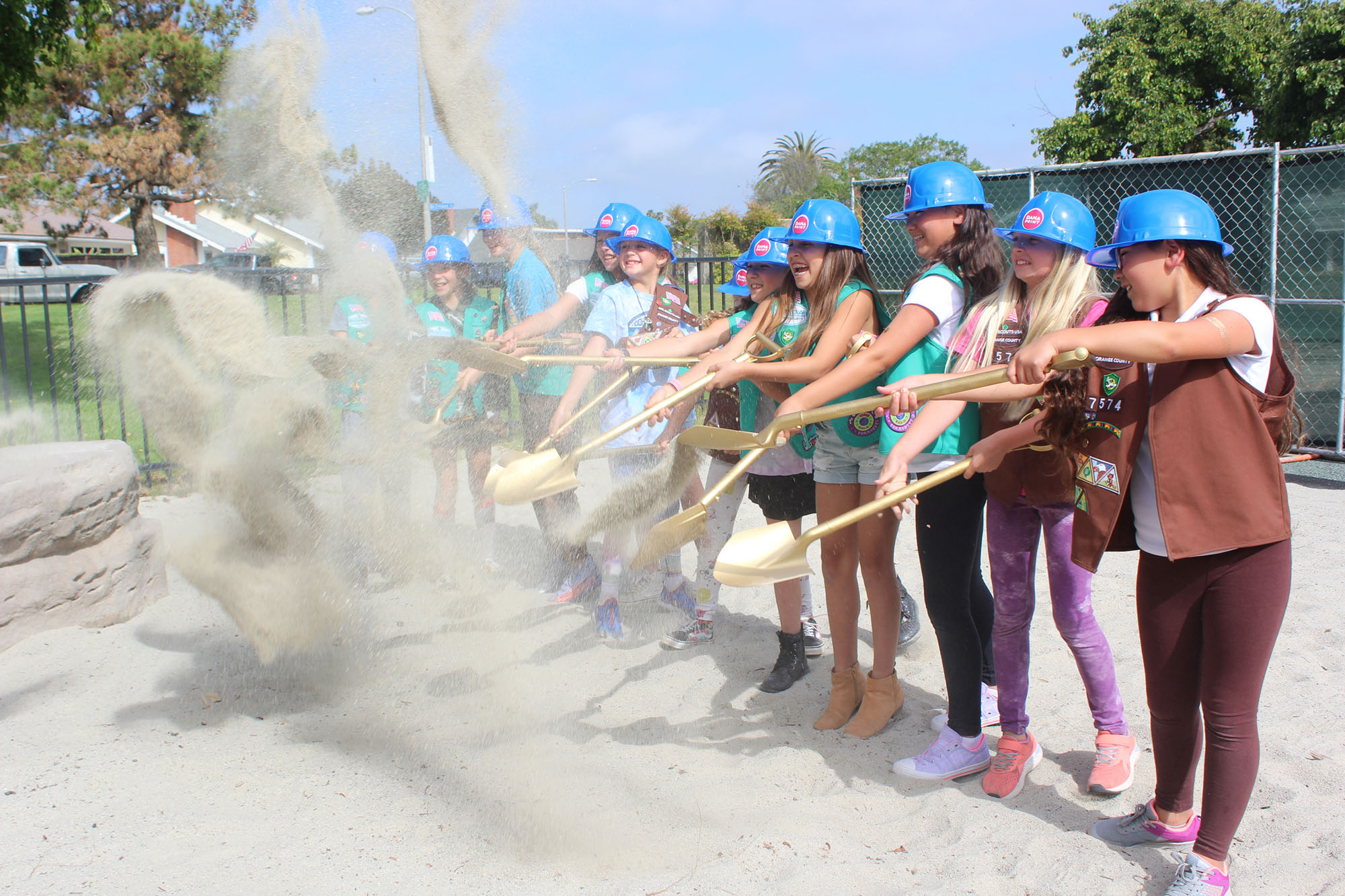 Equipped with plastic, golden shovels, the Girl Scouts of Troop 7574 broke ground on the soon-to-be renovated tot-lot at Sea Canyon Park on May 18.

The park’s renovation is a culmination of the Troop’s efforts to give younger kids in Dana Point a better place to play, in partnership with the city’s Department of General Services.

Troop 7574 is made up of both Brownie and Junior Troops. Brownies are generally in second or third grade and Junior scouts are girls in fourth or fifth grade.

“I want to congratulate Troop 7574 today on this big event,” Muller said. “They’re getting the Bronze Award today. That’s the highest award that a Girl Scouts Junior Troop can achieve and they did that through a multi-level process.”

When the girls took on the Sea Canyon park tot-lot project, they had been working towards their Bronze Award—given to Junior scouts, celebrating the culmination of their Junior Journey. To earn the Bronze Award, scouts must act on a project as a group to make a difference in the community, Troop 7574 co-leader Cambria Price explained.

The first project the troop took on was adopting a family for the holidays. The troop found families in need through Family Assistance Ministries and used their earnings from selling Girl Scout Cookies to help buy clothes and other household goods.

Then, the troop decided to write Valentine’s Day cards for the city’s seniors, completing another requirement of the Bronze Award. The troop had been in the process of writing cards when they learned that the park they often used for meetings and scout celebrations had closed.

“As they were writing, they were like, ‘Hey, can we write cards for the park,’” Troop 7574 co-leader Kayli Berutich said.

They used the extra construction paper, glitter and stickers to write letters to the Dana Point Department of General Services with suggestions for renovating the space. The tot-lot at Sea Canyon Park had been closed since last December after broken glass was found in the sand.

“They started writing cards about what they would like to see at the park placed in that area,” Berutich said. “They were worried that it would just be covered with a rubber top or cement and that the toddlers wouldn’t have an area to play.”

The Girl Scouts Troop used the closed park as an opportunity to take on a new project to help the younger kids in Dana Point and work towards their Bronze award in the process.

“So, they sent us letters on construction paper, lots of glitter that’s still on my desk right now,” Director of General Services James Shadle said at the groundbreaking ceremony. “It’s everywhere.”

Shadle, whose son was a Boy Scout, had some experience with scouts, and thought it would be a perfect opportunity for the Brownie and Junior Scouts to earn the Democracy Badge.

“They sent us letters, to give us some design ideas, and I thought, ‘you know what, let’s host a Girl Scouts Meeting, bring them in and let’s talk to them about what they want to see in the park,’” Shadle said.

One of the requirements to earn the Democracy Badge is for Girl Scouts to talk with city leadership and learn how a city is run. The city set up a panel with the city manager, assistant city manager, public works director, the community development director, the police chief, the fire chief and Shadle. The girls got to sit behind the dais and pose questions to the panel.

“They were very excited,” Berutich said. “They thought it was so neat to be able to talk in the microphones and use their voices.”

Some of the girls were shy and afraid to speak in front of City Council, Price said, but grew more confident during this project.

“To see that evolution of them being able to now use their voices and not being afraid to stand up and say what they feel, it’s been pretty amazing,” Price said. “We’ve seen some of the girls that are pretty quiet and introverted. Through this, they have really made a change in themselves which, that’s Girl Scouts, that’s kind of what we wanted to see too.”

Ahead of the meeting, Shadle reached out to playground equipment companies and asked for design proposals, using the Girl Scout letters as a reference. The city received six different designs, which the Brownie and Junior Scouts had the opportunity to vote on during their meeting.

“The city was so amazing,” Berutich said. “It makes me really proud to live in Dana Point, the way they have just taken this and how it’s just blown up.”

Troop leaders Berutich and Price asked the girls what their favorite aspect was of the process, working with the city to renovate the park.

“They were like, ‘it was knowing that our voices count and knowing that we can actually make a difference,’” Berutich said. “The moms were about to cry, they were so proud of their kids.”

“I think there’s a lot of lessons learned throughout the whole process,” Berutich added. “The partnership was wonderful and the girls have had exposure to just so many elements throughout this whole entire thing.”

At the groundbreaking ceremony, Junior Scout Ella Small said she was excited to be able to help younger kids in the community.

“I learned that it doesn’t matter if you get anything back, it’s still good to help people,” Ella said. “It just feels really amazing to know we made a difference.”

Junior Scout Lola Berutich agreed, adding that it was cool to get to choose what the city put in the park for little kids.

“Well, we have a park to play on and I think it’s important that they get somewhere to play on too,” Lola said.

Reflecting on the lessons learned throughout the project, together the troop wrote, “we learned to take action with our hearts and voices, to be brave and courageous, to work together to make a difference in our community.”

Shadle explained that construction on the park might take longer than usual because of shipping delays.

“We did order the playground system, it’s been ordered and being constructed right now,” Shadle said. “The first thing you’re going to see tomorrow, there will be a construction crew here removing these boulders. The boulders will go first and then they’ll spend a couple of days taking the sand out and preparing the ground for the playground itself.”

Once the sand and boulders are removed, a fence will go back up around the lot until the playground gets delivered in August.

“Then, once the playground is in, they put what’s called ‘Pour-in-Place,’ it’s almost like a liquid, it comes out as a liquid but then it hardens up and it’s that squishy stuff that you play on,” Shadle explained. “Then we’ll open it back up and we’ll be ready to go.”