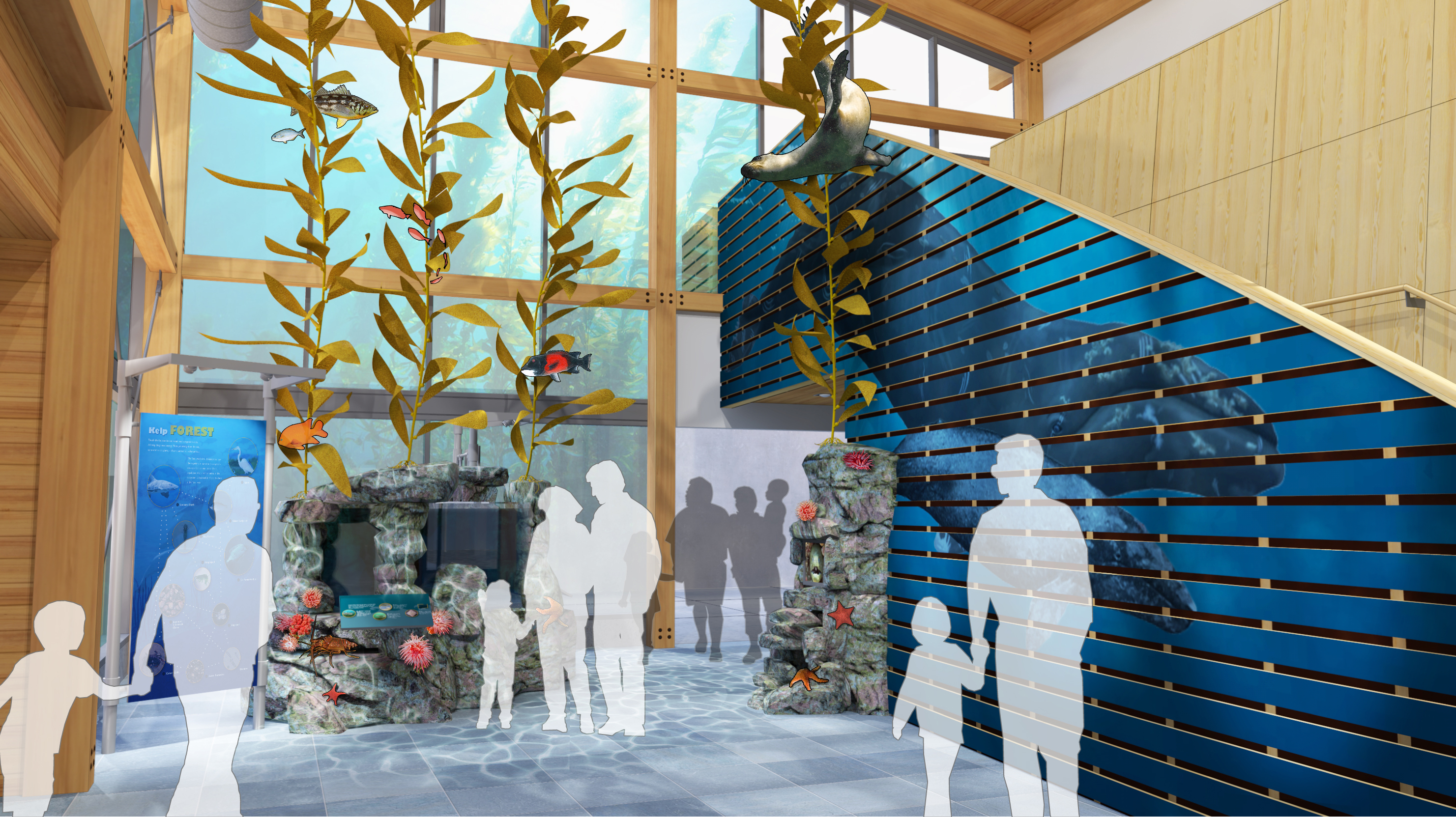 Ocean Institute expansion will bring more ‘undersea’ fun and education for all ages, open to the public seven days a week

“Wisdom is not a product of schooling but of the lifelong attempt to acquire it.”—Albert Einstein

“We must become the change we want to see.”—Mahatma Gandhi

These two sentiments—like ingredients in a recipe for a nutritious but at the same time delicious meal—aptly describe the mission of the Ocean Institute in Dana Point.

As the nonprofit ocean education school embarks on the second phase of their Maddie James Seaside Learning Center expansion, the institute plans to extend its entertaining and engaging brand of sustenance, beyond students to the public at large.

It is in the spirit of these quotes that the organization has embarked on a plan to add new exhibits and adopt a schedule that will offer opportunities for discovery, seven days a week.

Phase 2, set for completion in spring of 2015, will add a hands-on interpretive center in the lobby and courtyard areas, with engaging displays inviting visitors of all ages to become immersed in local underwater habitats while on dry land, and to participate in citizen science research and experimentation.

The Ocean Institute’s seaside learning center bears the name of Maddie James, a 5-year-old girl who passed away in 2011 at the age of 5, nearly two months after being diagnosed with an inoperable brain tumor. Her parents Kajsa and Collie James formed the Maddie James Foundation in her honor and through it raised $1 million, the balance needed in order to begin construction of the seaside learning center at the institute—Maddie’s favorite place.

Phase 1 of the Maddie James Seaside learning center was completed in 2013 and includes a 300-foot science landing and the 100-foot historic maritime pier.

Dan Stetson, Ocean Institute president said the upcoming completion of the project’s second phase will bring the institute full-circle in its mission.

“When the institute opened about 11 years ago, it was originally intended to serve only as a school site,” Stetson said. “We were really surprised when folks started coming here who were not part of the classes, knocking at the doors wondering what was behind them.”

The institute responded to that demand by opening to the public on the weekends but found, over time, that even that wasn’t enough, he said.

“More and more people wanted to come during the week, especially with the increased visitation to local hotels,” Stetson said. “Many would certainly make their way down to the Harbor and come straight here only to be disappointed when we had to turn them away. We are also disappointed by that. So being able to offer programming not only for students through schools, but also to the general public is really, in my mind, coming full-circle. It is the completion of a dream that started many years ago.”

The dock was part of the original plan for the Ocean Institute but budget and permitting requirements meant it had to be cut from the initial construction of the ocean learning center, said Stetson.

The upcoming addition of new features, and seven-day-per-week public access, is being designed with safety and flexibility in mind. The new exhibits will be able to be accessed by public visitors while school groups are in attendance in separate areas of the institute.

The new hours will also include separate times available to the public for ventures onto the seaside learning center dock while not in use by school students, to engage in activities similar to what students are doing.

Such activities will include “citizen science” and research, looking into issues such as water quality or the observation of invasive species and other investigations as the need presents itself and studies of early maritime history and exploration.

“These will change as community needs change and be aligned with current scientific environmental studies,” Julianne Steers, director of husbandry, said. “It will give us the chance to invite all of our guests to be scientists for a day.”

Adding greater access to the institute’s programs is vital to its mission, she said.

“The ocean is really our back yard and if we don’t care for it, someday the resources within it and the enjoyment we get from it may not be there in the same fashion,” Steers said. “How are you supposed to know what to love if you don’t know what’s there?”

“When taking a look at those we were turning away, we found that a large group are the ‘stroller moms’ with children who are not yet in school and looking for something to do,” said Kajsa James, the Ocean Institute’s vice president of development.

With that in mind, one of the key exhibits in the expansion will be an oversized tidepool playscape, similar to what one might see in a mall, but representative of the animals and habitat found in local tidepools, she said.

“There was also a very strong want, on my part, to recognize the donors of the Maddie James Foundation,” James said. “The foundation has named this tidepool and along the outside wall will be a wave mosaic by a local Laguna Beach artist with tiles displaying donors’ names.”

Within the playscape will be models of tidepool organisms, constructed of a sturdy but soft foam, coated with a child-friendly sculpting material and magnified to about 30 to 50 times actual size.

“The tidepool will give our pint-sized visitors a look at the true environment,” Steers said. “While they play, it will allow young children to see animals in appropriate zonal regions, or depths, within the tidepool. So they’ll actually be able to do some identification of the different local species and learn about how tides work.”

The playscape is meant to be climbed on and includes crevices to crawl through and surprises to discover, within a tactile learning opportunity, she added.

“It’s the Honey I Shrunk the Kids version of a tidepool,” James said. “And I hope the children who visit will feel exactly how Maddie felt, to experience the wonder, joy and excitement that my daughter did when she was here.”

Phase 2 will also include the transformation of the three-story indoor lobby into a 30-foot “underwater” kelp forest with realistic models of the ocean plants and organisms, and living fish and other animals on display in a large aquarium. The room will be named for the Draper Family Foundation, generous donors to the exhibit.

Upon venturing further inside the lobby area, visitors will enter a room representing life in the deep water off of the Southern California coast.

Outside, along with the playscape, will be a section devoted to the study of microfossils, ocean chemistry and the growing threat of ocean acidification. This exhibit, dubbed Science at Sea, will be supported by the Sand Dollar Guild, a fundraising organization formed to benefit the institute.

All of the new exhibits will include a number of hands-on elements—flip doors, interpretive panels, games and pop-up experiments—meant to engage visitors in learning about the ecological health of the ocean environment and hopefully prompt ocean advocacy.

“We’re really keeping the focus local and delving into some of the issues and concerns that are present at the forefront of ocean health, locally as well as worldwide,” Steers said.

The Massen Greene Foundation and the Chambers family, founding donors of a new feature called the Sea of Stars, have funded the addition of a sand blasted wayfinding path of sea stars—the institute’s logo—with inset stainless steel plaques bearing the names of donors.

More information about the Ocean Institute can be found online at www.ocean-institute.org.

OCEAN INSTITUTE BY THE NUMBERS

100,000
The number of students attending educational programs annually, from pre-kindergarten through college, as well as some classes offered to retirement communities

500+
The number of volunteers on the Ocean Institute roster, many donating hours nearly equivalent to full-time work. Institute officials expect to need several dozen new volunteers will be needed to fully staff the Phase 2 expansion.

85
Employees working at the Ocean Institute.

10,000-15,000
Current yearly weekend attendance by the public. Yearly visits by the public are expected to double upon completion of Phase 2.