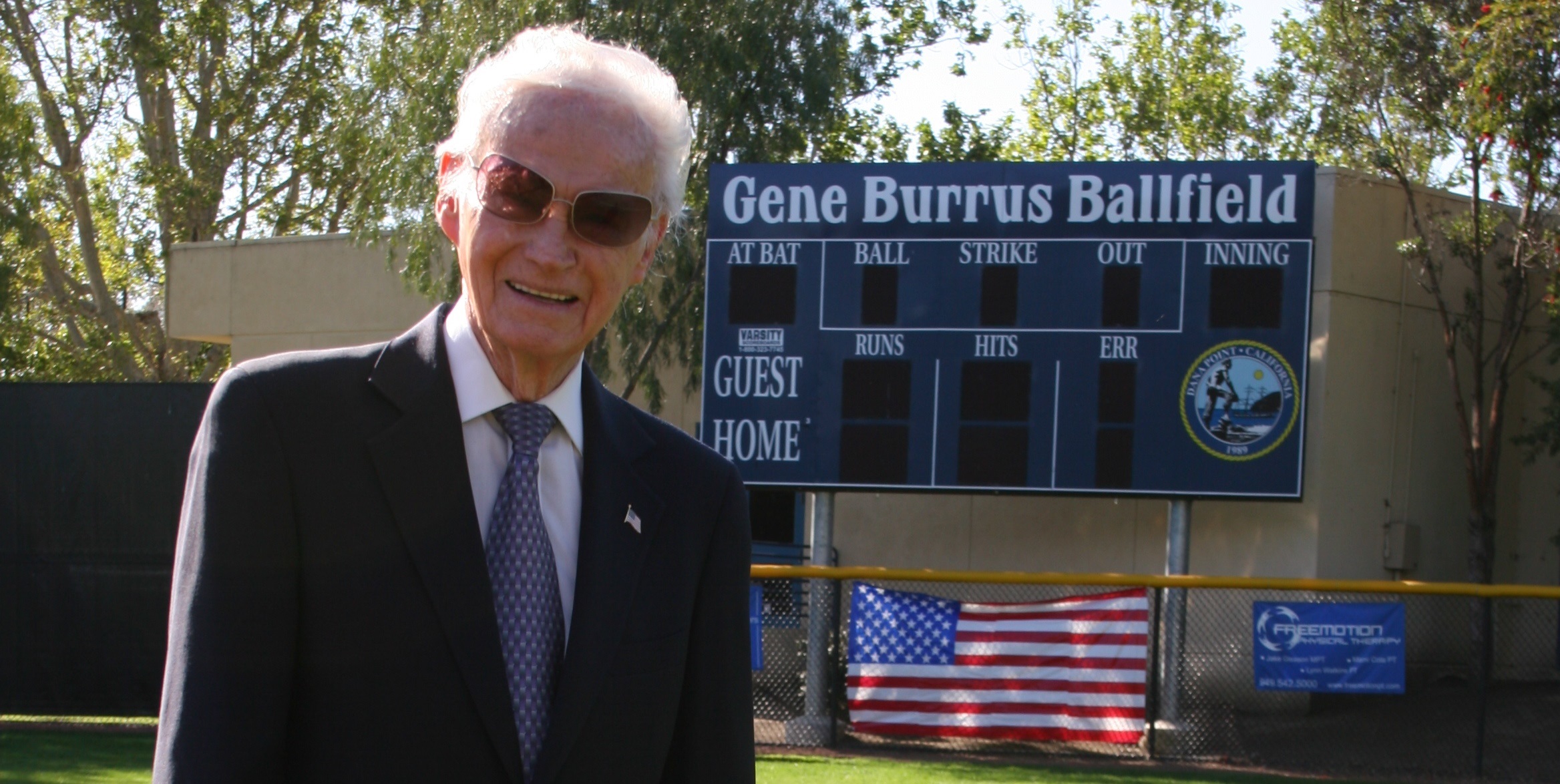 Gene Burrus, ‘The Voice of Dana Point,’ Passes Away at 88

The sights and sounds of “home” play a large part in making lifetime memories. And the people, places and events responsible for them are integral to the fabric that makes up a city, place or neighborhood. So when we lose an iconic figure to death, the loss is felt well beyond the circle of the deceased’s family and close friends, extending outward to include an entire community.

Dana Point has suffered such a loss—in the void left and the voice silenced—when Gene Burrus, 88, passed away on Oct. 21 from melanoma.

Burrus is survived by his wife of 50 years, Gladys, his sister-in-law Tona (Arizona) and numerous nieces and nephews, one of which Gladys is now living with.

Gene “The Voice of Dana Point” Burrus’ became one of the city’s most beloved figures, with his golden voice, personality and generosity, since “retiring” to Dana Point in 1986 with his beloved wife.

As announcer for Dana Point Youth Baseball for more than a decade and the Dana Point Festival of Whales Parade for nine years, as well as his more than 15 years of volunteer service—three to five days a week—at the Senior Center, acting as the unofficial greeter, master of ceremonies, bingo caller and overseer of food distribution to qualified residents in need, Burrus more than earned his nickname, along with the respect and admiration of friends and fans of all ages.

Thousands of area children will remember his voice fondly as he called the play-by-play at their baseball games, making them feel as exciting and important as the big leagues. Scores of Festival of Whales Parade-goers and participants recall the big introductions every band, float and community group, large or small, got as they marched down Pacific Coast Highway. And to his large and ever-growing group of senior friends, his time at the Senior Center created a welcoming, fun and active home-away-from home for all.

“Gene was one of the best salesmen for the city of Dana Point, whether supporting our youth or seniors,” said Kevin Evans, director of Community Services & Parks. “He always had a welcoming smile and a handshake for everyone at the Community Center, inviting people into the place he considered an extension of his home and was supportive and appreciative of what the City Council, city staff and Senior Services does for our residents. He dedicated his life to serving others and is sorely missed.”

Burrus showed his dedication to and appreciation for the city and its efforts with more than eight years of perfect attendance at City Council meetings, where he often spoke in praise of Dana Point’s efforts to provide services to residents. In 2004 City Council honored him with a certificate of recognition for his community service and in 2006 issued an official proclamation naming him “The Voice of Dana Point.”

Rene Cortez, Dana Point Youth Baseball director of communications for more than 30 years, worked side-by-side with Burrus during his years as announcer.

“Over the last season or two (Burrus stopped announcing in 2012) when I’d go down to the ballpark and watch the games, it struck me as unfortunate that the players moving up to the Mustang division would never have the opportunity to hear Gene Burrus announce their games,” Cortez said. “Many of us have fond memories of Dana Point Youth Baseball’s announcer. Mine extend beyond the ballfield into the Senior Center where he persuaded me to volunteer—into his home as I became friends with him and his wife, and then into my heart as I became part of their family. My admiration and love for this gentleman can only be expressed in this thought: If a person could choose their father, there is no one I would wish to fill those shoes except Gene Burrus.”

Burrus was born in Arizona in 1927 and although he didn’t become a Dana Point resident until retirement, it was not his first visit to the city.

In 1933, while on a vacation to visit family members in Southern California, Burrus’ father took a photograph of the family’s visit next to the Dana Point sign. That photograph showing a 6-year-old Burrus is now among the tile murals on the Dana Point pedestrian bridge at the entry to the city at PCH and Dana Point Harbor Drive.

In 1945 Burrus joined the Navy and then in 1951, following his time in the service, attended the Radio and Engineering School in Burbank for an education in broadcasting.

Burrus began his career in 1952 at radio station KRUX in Glendale, Ariz.

His career in radio and television took him from California to Arizona and back, working at stations such as KCMJ in Palm Springs; KCOP, Los Angeles; and KOCM, Newport Beach.

A Celebration of Life

A celebration of Gene Burrus’ life will be held on Sunday, Nov. 22 at noon on the Gene Burrus Ballfield at Del Obispo Community Park, adjacent to the Dana Point Community/Senior Center at 34052 Del Obispo Street in Dana Point.

Click here to read the story about the 2012 re-naming of Mustang Field to the Gene Burrus Ballfield.

Below, see video of Burrus speaking at the Monarch Beach Sunrise Rotary Club in 2014. Video: Courtesy of Alan Wickstrom