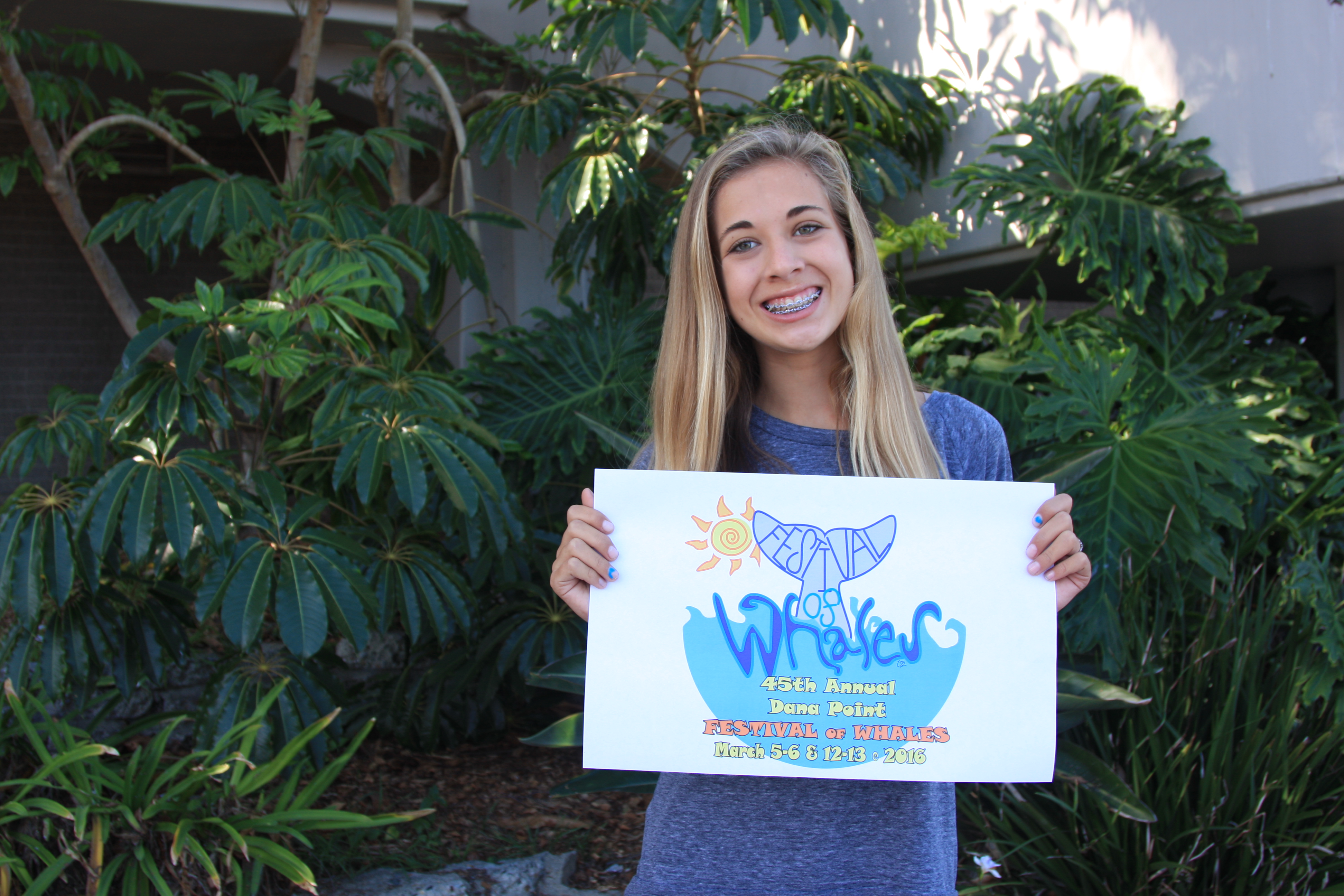 Full STEAM Ahead for Festival of Whales

The upcoming 45th annual Dana Point Festival of Whales, set for March 5, 6, 12 and 13, 2016, has again looked to the city’s youth to be valuable contributors of inspiration, engagement and entertainment, fulfilling an integral part of the event’s mission—to educate and involve the entire community and appreciate and showcase the talent of Dana Point’s next generation of leaders.

Since 2011, when festival coordinator Penny Elia first approached Dana Hills High School digital photography and ceramics teacher Natalie Hribar-Kelly with the idea of tapping into the school’s body of talented visual arts students with a logo design contest for the 2012 event, the two have been sharing ideas and expanding student involvement every year.

“I feel like we planted a seed and like anything you try to nurture and grow, it takes some time,” Elia said. “The program has now grown from reaching out to recruit teachers and students to participate, to the point where they are coming to us asking to participate.”

The steady increase in interest by both students and teachers at Dana Hills began its upward trajectory almost immediately that first year. By the time the first logo design winner was chosen, the program had already expanded to include a field trip for 90 students—whale watching aboard a Dana Wharf vessel, followed by a tour of the Ocean Institute’s historic brig Pilgrim—designed to inspire the teens to create artwork for display at the festival’s Art in the Park art show and sale. Two years ago, students from the school’s foods classes got involved in the annual clam chowder cook-off before switching last year to baking cookies for the event.

This year’s logo winner and four runners-up have been chosen, the annual field trip—hosting 220 kids and eight teachers—is set for Jan. 8 and the student involvement opportunities have grown from inclusion of only visual arts and foods students to participation across all other departments. Along with the longtime participation of the marching band in the festival parade, an estimated 15 percent of the school’s student body will be involved in the event.

With the educational system increasingly focused on “STEM” curriculum—the integration of science, technology, engineering and mathematics in learning—over the past few decades, art has often been overlooked and under-offered in America’s schools. Dana Hills is an exception, with its on-site arts magnet school—the South Orange County School of the Arts, or SOCSA.

So when the festival first began working with DHHS, the arts-focused partnership was a perfect fit. But just as STEM leaves out art, it became increasingly apparent that the program was under-utilizing its opportunities to connect with students on STEM subjects.

Elia and Rhibar-Kelly began brainstorming ideas for expanding the program to benefit more of the school’s student body, deciding to offer opportunities for students from every department—to put the ‘A’ for art, back in STEM and make it “STEAM.”

They began with inviting the English department to add poetry to the festival’s Art in the Park event. That idea grew to include the drama and dance departments—thespians to read and perform fellow students’ poetry and dancers to interpret it.

Interest among teachers, Rhibar-Kelly said, was so enthusiastic, they thought; why not find a way to bring in the science and math departments as well.

“Everybody’s heard of STEM as an educational focus, but art is the way to open minds,” Elia said. “It is our responsibility as adults to mentor the next generation and I think the festival gives us a good platform to do that, across all academic subjects. And the festival will now have a whole lineup of student-created entertainment stemming, or should I say ‘STEAMing’ from the original logo program.”

AND THE WINNERS ARE

The logo design contest entries for the 2016 festival were submitted last school year with finalists being chosen last month.

This year’s winner is sophomore Camden Butterworth, whose logo design will become the official brand of the event, emblazoned on everything from printed advertising, event programs and online media to souvenir logo wear in the form of sweatshirts and T-shirts.

Butterworth, who created the logo in Krista Snow’s multi-media and design class and intends to continue studying photography after graduation, said she wanted to take her entry in a totally different direction than the last few year’s designs.

“I wanted to go for a cartoonish look with smooth lines and lettering—a simple design that would be fun and different to look at,” Butterworth said. “I’ve gone to the festival with my family growing up and last year some of my art was on display, but to be this year’s logo designer is a huge honor. To have my logo be among all the famous artists who have done it in the past, as well as the student designs, is amazing.”

Snow was also excited to have one of her students chosen as this year’s winner.

“I remember Camden working on it last year and I was very impressed,” Snow said. “It was very creative and she was thinking outside the box by incorporating text. She worked very hard on it and I’m thrilled for her.”

The other four finalists are: in second place Anthony Aguilar, a 2015 grad now attending college in San Francisco as an art major, sophomore Agustina Cruz in third place, junior Chloe Gaynor in fourth and, in fifth place, junior Fatemah Khanmohammadi.

The winners receive prizes including whale watching tickets from Dana Wharf Whale Watching and cash—$200 for the winner, $100 for second place, $75 for third, $50 for fourth and $25 for fifth—and their designs will appear at Art in the Park and in the Festival of Whales official event guide.

Gaynor also said the announcement that her design was chosen among the top five was a welcome surprise.

“I was pretty shocked when I was chosen as a finalist,” Gaynor said. “I think it’s awesome that the festival allows kids to be included in such a high-profile way. I’ve grown up here, going to the festival every year, and to now be a part of it is awesome.”

She went on to say that although she doesn’t intend to study art in college, the logo design contest aligns with her intended major—marketing and advertising—and a fun way to get involved in her community.

“A lot of teens sort of stray away from having a sense of community and a program like this, giving us a chance for our art to represent such a big event, is amazing,” Gaynor said.

Rhibar-Kelly agreed, adding that high school students’ disconnect with their community often happens because teens are often dismissed, either due to a belief that younger kids are easier to deal with and tend to be more enthusiastic participants in community events, or the fact that athletics often take center stage in high school.

“The idea that this community cares enough to provide a program especially for teens to highlight their talents, shows we think their interests and talents are valued and important,” she said. “What’s really exciting about this year’s expansion is that we’ve created this really well-rounded program that reaches all kinds of kids, with varied interests, and gives them new opportunities to interact with each other and the community in a very meaningful way.”