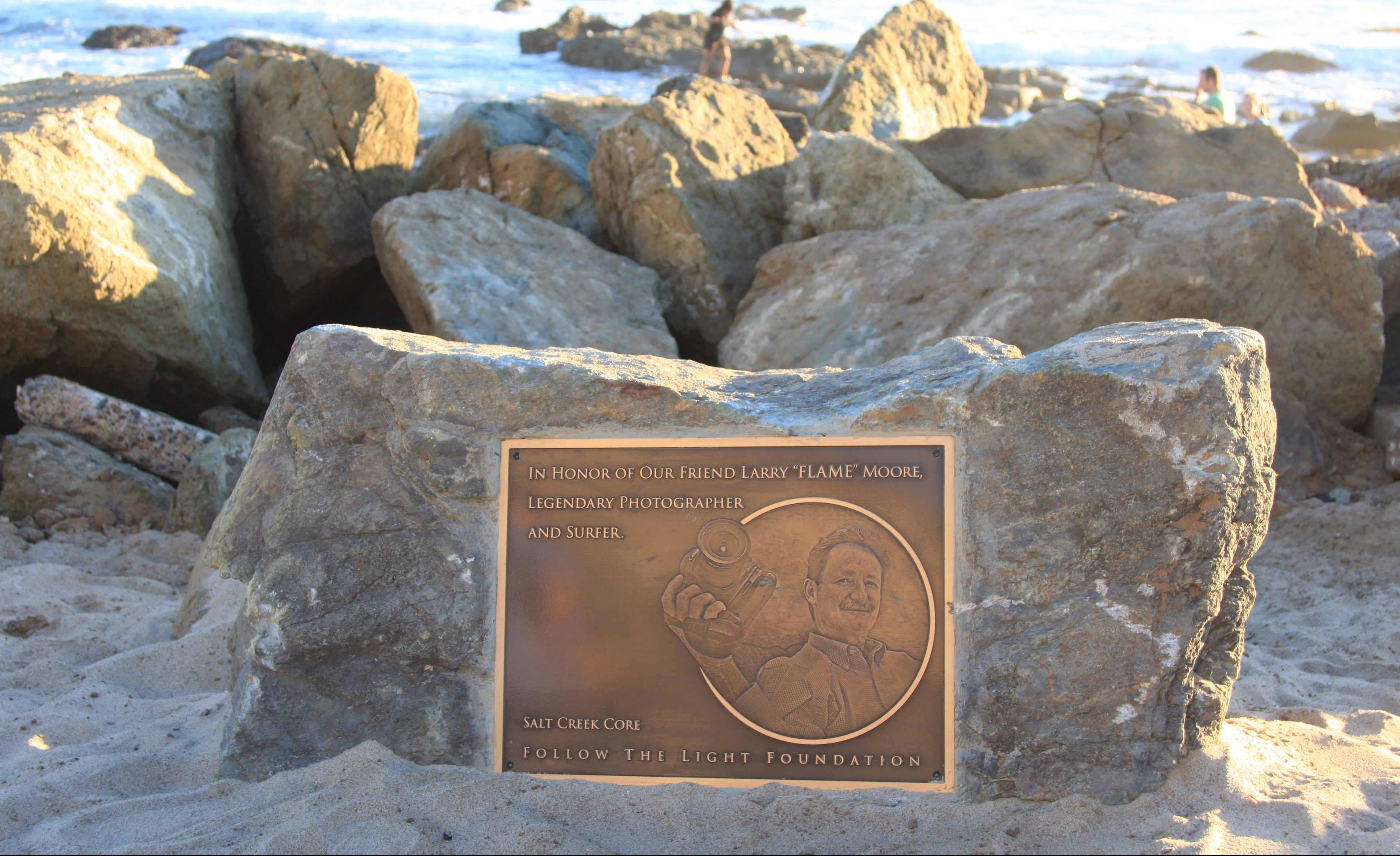 From the Core and to the Point: Longtime Salt Creek Surfers Place Larry ‘Flame’ Moore Memorial at Salt Creek Point

The late Larry “Flame” Moore was much more than a legendary surf photographer and photo editor. To the local surfers he shot, helping to get their talent noticed and sparking professional careers for many, Flame was a mentor, a friend and a member of the “the family.”

So when a memorial stone for Moore appeared on the point at Salt Creek Beach near the lifeguard tower last month, a crowd of longtime area surfers showed up to celebrate and the news spread like wildfire on social media. And its controversial, and unpermitted, placement drew the ire of county officials, which in turn, raised the hackles of local surfers.

Upon Moore’s passing in 2005, a group of longtime Dana Point/Salt Creek Beach area surfers from the ’60s and ’70s known loosely as “the Salt Creek Core” gathered in the parking lot after his memorial and talked about what they could eventually do to commemorate the life of Moore, to honor the man they loved and admired.

Steve Cox recalls a conversation that day with fellow Core member Gary Dapelo in which the two discussed the idea of somehow creating a tribute to their departed mentor and friend.

Cox said that early on they intended to apply for the proper permits through the county but after being frustrated by “red tape” they decided to just get it done on their own.

“There was too much bureaucracy, too many meetings,” he said. “There were just too many cooks in the kitchen so we took matters into our own hands.”

A large stone, weighing an estimated 3,300 pounds, with a brass plaque emblazoned with the most well-known picture of Moore holding his camera, appeared on the point in the middle of night between Aug. 1 and Aug. 2 and county park officials were not pleased. On Aug. 3 Dapelo spoke on the phone with Steve Bonhall, administrative manager for Orange County Parks South Coastal Operation.

“I owned up for having been the one who placed the rock and apologized for not going through protocol but it seemed like everyone wanted to put their mark on it and I just wanted to make it happen. Ideas for things like a memorial wall and involvement by the Ritz-Carlton hotel were being talked about,” Dapelo said. “To me it was meant as a simple gesture, a private gift to the public. I probably should have done it differently but it was done. I told Bonhall I’d really like for it to stay until we could get the proper approvals.”

Dapelo explained that the memorial was funded privately by surfers as part of a promise he and others had made to Moore’s family.

“It was an act of honor,” Dapelo said. “I made a promise and I tried to keep it.”

After speaking with Bonhall, Dapelo received an email from Bonhall thanking him for taking responsibility for the placement of what Bonhall referred to as the “unauthorized memorial rock and brass plaque,” and informing him that he would be assisting Dapelo with the removal of the memorial from county property.

The letter went on to question how Dapelo would be providing insurance, necessary to obtain a permit from OC Parks for the removal of the rock and plaque from county property. Bonhall questioned whether the Bobcat tractor Dapelo had used to move the rock, from the back yard of his Monarch Bay home to the beach, was owned or rented and whether Dapelo had an equipment company or contractor’s license that could provide insurance for its operation on public property.

“I identified the commemorative rock (from my yard in Monarch Bay) as that of a private gift to the public. My intentions were and remain honorable in all respects,” Dapelo’s Aug. 4 response read.

Dapelo went on to say that, as the rock was placed “well below the mean high tide line,” he did not believe it was actually on county property. Aside from the tide line, Dapelo also told Bonhall another reason for his belief that it was not on county land was the presence of sharp rusted spears of iron rebar sticking out from chunks of concrete among the rocks surrounding the point as retention material. Surely it was not county property, because the county would not have allowed the dangerous condition to exist, he wrote, and reiterated his intention to work with the county to find a compromise that would allow the rock to remain.

The next morning the county added rocks covering the identified dangers, Dapelo said.

“They actually enhanced the area,” Cox said. “We were pleasantly surprised.”

On Aug. 6, Dapelo received correspondence from OC Parks Division Manager, Bill Reiter, who said that after investigating the question of whether the rock was on county property it had been determined that it was actually on state property and the county would therefore defer to the state of California, namely the State Lands Commission and the California Coastal Commission on issues surrounding the “gift” to the public.

With that, Reiter said, the issue was out of the county’s hands.

SHOULD IT STAY OR SHOULD IT GO?

Cox said the argument for keeping the commemorative rock in place is backed by Moore’s important contribution to the area’s surf history, culture, the lives of local surfers and the launching of more than a few professional surf careers.

“Larry came and put Salt Creek on the map with his beautiful photography,” Cox said. “He was an equal opportunity photographer. You didn’t need a bunch of sponsor stickers on your board or a pink wetsuit to get in the magazines. He loved everyone and everybody loved him. The point was Larry’s lair. He shot so many magazine photos and cover shots from that point. It is such a fitting spot.”

Chris Carmichael, who said he has been surfing at Salt Creek at least three times a week for over 50 years, took one look at the rock and agreed wholeheartedly that it should stay.

Carmichael said he was immediately struck by the feeling that it was, in place and in structure, a very fitting and appropriate way to honor Moore and people’s memories of the man who meant so much to so many.

“It’s an absolute honor,” he said. “Larry was a big part of our lives growing up and surfing here. He gave the young guys exposure. It was such a thrill to see ourselves in the magazines. He put Salt Creek on the map, took it worldwide. He taught us to have respect for Mother Ocean and for other surfers. That is a lifetime achievement, as far as I’m concerned and that’s why it should stay.”

Carmichael said he is not alone in his feeling that Dapelo did a great thing by putting the rock there.

“When we’re on the point checking the surf or out in the lineup, our friend is still with us,” he said. “It’s already a part of the heartbeat of Salt Creek and taking it away would be a grave mistake. It’s part of the authenticity of the spot.”

Reiter said he has referred the issue to the state but, as of yet, has received no response.

“I can appreciate their dedication to their friend,” Reiter said, adding that the county’s initial response to the memorial was due to policy. “We don’t do memorial plaques right now. We are in process of creating a policy that would allow that, but for now, we just don’t do it.”

As for what the response by the state will likely be, Reiter says he really doesn’t know, nor does he have any idea what the time frame for expecting a response could be.

“It is what it is at this point and it’s all in the state’s hands,” Reiter said. “It is funny that it showed up at midnight. And as far as I’m aware the county has no plans on going after him for transporting it (across county property) in the middle of the night.”

Dapelo is hopeful that the state will listen to the wishes of the public and allow the rock to remain in place.

“With regard to the state, if we’re not affecting the tidepools, we may have landed the rock in a no man’s land,” Dapelo said. “What I really want is to keep the rock there as long as we can. It’s just a commemorative rock. It doesn’t have a negative impact on anything. If anything, it is a tremendous addition to the area, a true gift, like Moore was to so many.”