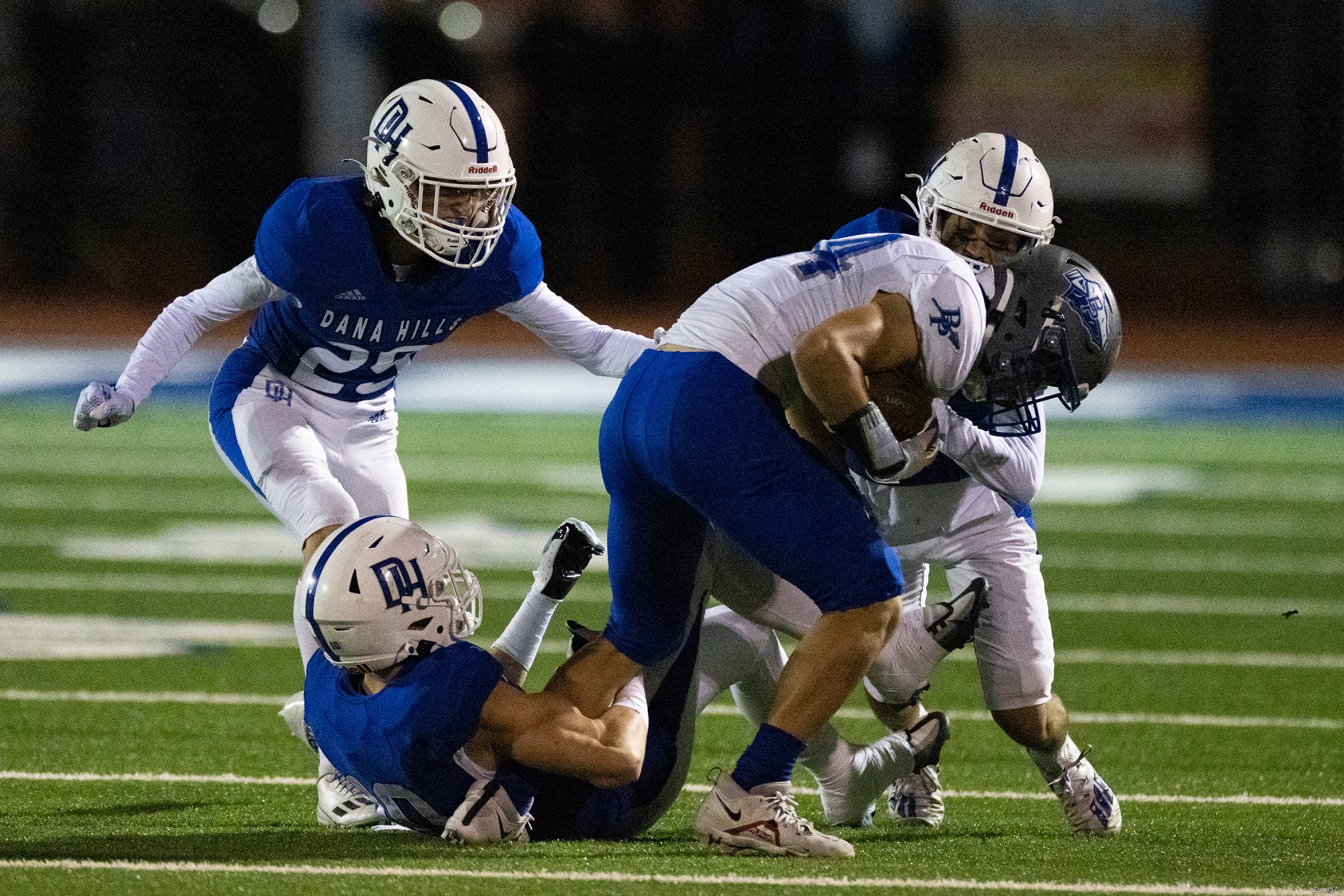 DANA POINT – Holding onto a slim lead into the fourth quarter in their first home playoff game since 2013 in a game where punting was optional, the Dana Hills football team stuck to its guns, and visiting Baldwin Park met the challenge.

Dana Hills went for it on fourth down five times in the game, but its final two attempts proved most costly, as Baldwin Park snagged an interception, recovered a fumble and scored quickly after both to defeat the Dolphins, 28-16, in a CIF-SS Division 10 first-round game on Friday, Nov. 4, at Dana Hills High School.

“I think that you could do this thing where you rewind it all, and when you watch the film you try to learn from it,” Dana Hills coach Tony Henney said of the fourth down calls. “The bottom line is that we crossed the 50 about five times without any points tonight. There’s two things there: we’ve got to be better, and you’ve got to give them credit for making stops.”

Dana Hills (6-4) was the No. 2 seed in Division 10 after earning an at-large selection, but the Dolphins were left still looking for their first playoff win since 2009. Dana Hills qualified for the playoffs for the second straight season.

The Dolphins had to answer plenty of questions entering the season after they lost so many key pieces of a record-setting offense from a year ago. Dana Hills did so by changing its identity into a physical running team behind an improved offensive line and with county-leading rusher Christian Guarascio.

“I felt like at the end of this game, all I wanted to do was hug everybody,” the senior running back Guarascio said. “I couldn’t explain how proud I am of everybody, coming out here and finishing how they did. At the end of the day, we together as a brotherhood. From Week 1 to Week 11, we changed, and we really came together as a program.”

The Dana Hills program posted its fourth straight winning season this year, which completes a full turnaround from the five seasons prior to that where the Dolphins never won more than three games, including two 1-9 campaigns and a winless season. Dana Hills has now competed for league titles in consecutive seasons and made the playoffs in both years under Henney.

Guarascio said that the Dana Hills program had been motivated in the offseason to prove that they can play ball, that they weren’t going to slide back to the “same old Dana Hills.” Guarascio said the Dolphins program is forever different after the work of these last two senior classes.

“I felt like, before when I came here, it wasn’t like that,” Guarascio said of the offseason effort and focus. “It was more lackadaisical, and now there’s purpose to this program. I feel like the culture has really shifted.”

On Friday, Dana Hills had to battle more than just Baldwin Park, as plenty of key Dolphins were battling illness all week, including Guarascio. The senior back said he’d been fighting the flue since Tuesday, had an IV yesterday and was even at the doctor’s office on Friday morning.

Even after taking an early stinger on a defensive play, Guarascio still put out an intense effort on both sides of the ball. Guarascio carried the offensive load with 32 carries for 167 yards rushing and caught four passes for 56 yards and touchdown.

Baldwin Park turned up its offensive tempo and took its first lead of the game on a 32-yard touchdown pass, 10-14. Dana Hills responded with its own version of an up-tempo offense and handed the ball to Guarascio over and over. However, the Dolphins capped the drive in the air on a 15-yard touchdown pass from senior Connor Vernon to junior Chase Berry.

The extra point was blocked, which left Dana Hills ahead by only two points, 16-14, with two minutes left in the third quarter.

Dana Hills looked poised to extend its lead and march towards that elusive playoff win after an interception by Dominic Barto at the end of the third quarter. However, on the ensuing drive, Baldwin Park made its first of three game-defining plays.

On fourth down at the Braves’ 30-yard line, Baldwin Park snagged a Dana Hills pass and returned the ball over 60 yards. Two plays later, Baldwin Park ran in the 11-yard touchdown to go back ahead, 21-16.

On Dana Hills’ next drive, the Dolphins were forced into another fourth down at the Baldwin Park 46-yard line. Guarascio was handed the ball and plowed forward, and while it looked like he got to the first-down mark, the Braves swatted the ball loose and recovered.

Baldwin Park put the stake in Dana Hills at the end of the ensuing possession. On a third-and-15, Dana Hills was looking to sell out against the run, and Baldwin Park caught them with a 32-yard touchdown pass for the 28-16 lead with just over two minutes remaining.

The Dolphins got their pass offense going on the next drive looking to somehow desperately make a comeback, but Baldwin Park pulled in its third interception of the night to close out the game.

Baldwin Park will go on the road in the Division 10 second round at Covina.