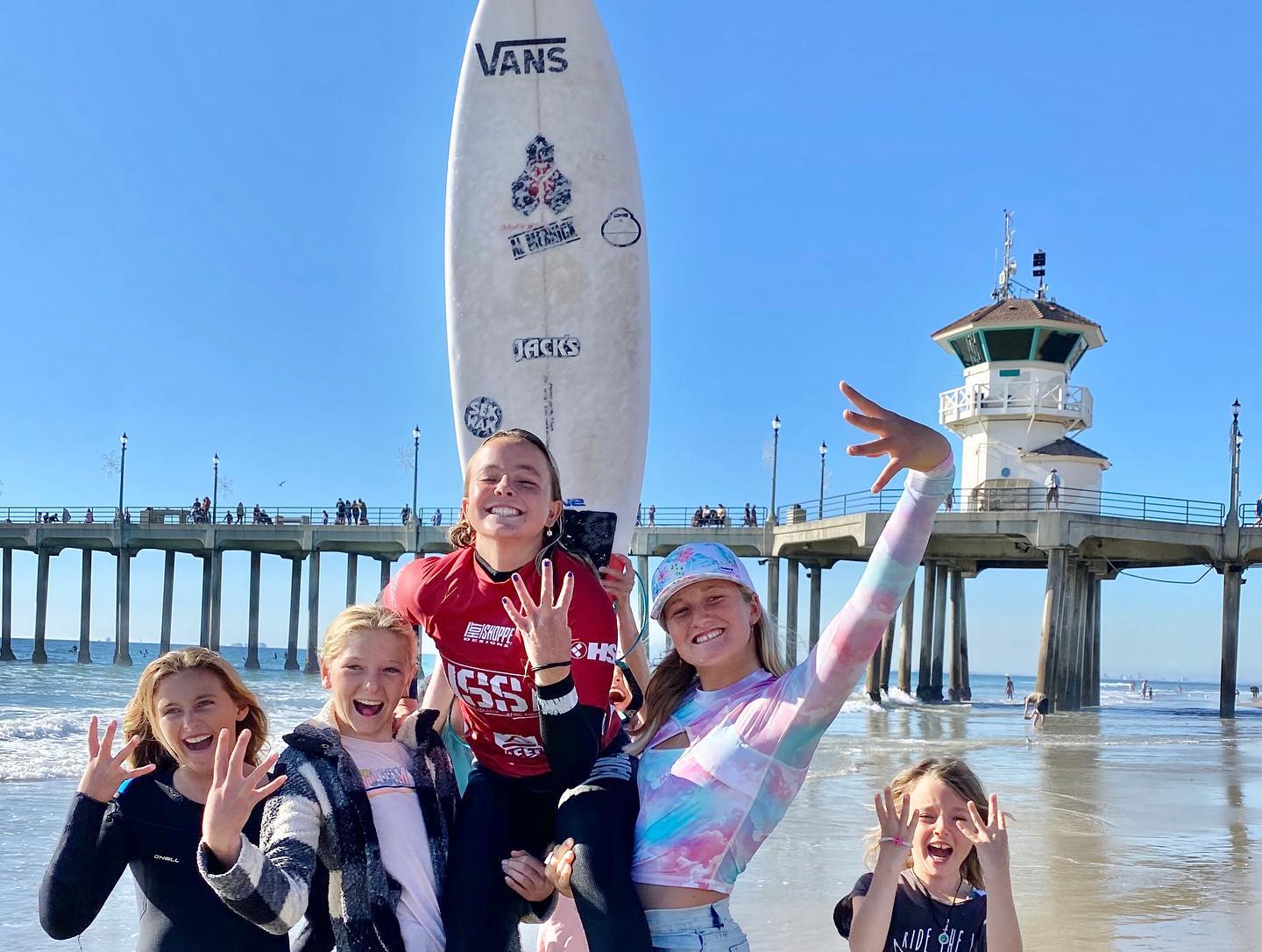 In the more than 40 years of the National Scholastic Surfing Association, there has been no shortage of future greats who have clawed their way to the top of the podium. From Andy Irons to Kolohe Andino and Carissa Moore, all three surfers have one thing in common: they were NSSA national champions before they were world champions.

The tradition continued last week at the NSSA National Championships in Huntington Beach.

But this year, it was San Clemente phenom Bella Kenworthy who accomplished something nobody in the history of the NSSA previously had done. Over the course of the event, Kenworthy, who just celebrated her 15th birthday last weekend, captured an incredible four national titles.

Sweeping the Girls and Women’s titles in both the Explorer and Open divisions, it is the first time that anyone—male or female—has won four titles in one NSSA Nationals event.

“I’m so stoked to win these four national titles. I had the best time at NSSA Nationals in Huntington,” Kenworthy said after the historic sweep. “Everybody was ripping. A special thank you to Janice Aragon and Gayline Clifford for all the hard work and making this happen. And thank you to my family, friends and sponsors that have supported me on this journey.”

With this accomplishment, Kenworthy has now won five national titles over the course of her NSSA career, also including the Open Super Girls National title back in 2019. Sponsored by Vans, she’s also an incredible skateboarder with a bright future on four wheels.

Of course, Kenworthy wasn’t the only local San Clemente and Dana Point surfer to shine at the NSSA Nationals. All kinds of past and present Groms of the Week found their way to the podium.

Putting in a strong showing, Dana Point’s Marlo Leigh Harris finished runner-up in both the Open Girls Mini Grom division and the Open Super Girls division. Harris has been building all kinds of crazy momentum with her performances lately, and she continues to be on a stratospheric trajectory.

Joining her in the Open Super Girls final was San Clemente’s Mia McLeish, who’s also been ripping as of late. Leaning on former WSL Championship Tour surfer Yadin Nicol for some coaching support, McLeish continues to lead and inspire her crew of local girls with performances like this.

For the boys, it was Dana Point’s Kai Thompson and San Clemente’s Tanner Sandvig leading the charge in the Explorer Boys Super Groms division. Thompson hammered his way to a runner-up finish, with Sandvig right behind in third.

Both Thompson and Sandvig have been doing a lot of good things in and out of the water this year, and are well on their way to some great things.

San Clemente’s Rex Hennings brought his best to the Open Boys division, finishing a very respectable fourth in the final, while Dane Matson also brought the heat, earning a fourth-place result in the Open Juniors division.

And for those wondering where all of this leads, as this story goes to press, the final stop of the WSL’s Challenger Series is being contested at Haleiwa. Careers hang in the balance as aspiring professional surfers look to qualify for the WSL Championship Tour via a strong result in Hawaii.

Among those to keep an eye on from our local waters are Sawyer Lindblad and Kirra Pinkerton, who have a very real shot of qualifying for the women’s Championship Tour.

And for the men, unfortunately, both rising star Kade Matson and goofy-foot hammer Cole Houshmand lost out in the Round of 64, dashing their hopes of qualifying for the 2022 tour.

Nevertheless, they’ll both come away from this season with a ton of great experience and a solid foundation on which to build next year.

The waiting period for the WSL’s Haleiwa Challenger runs through Dec. 7.