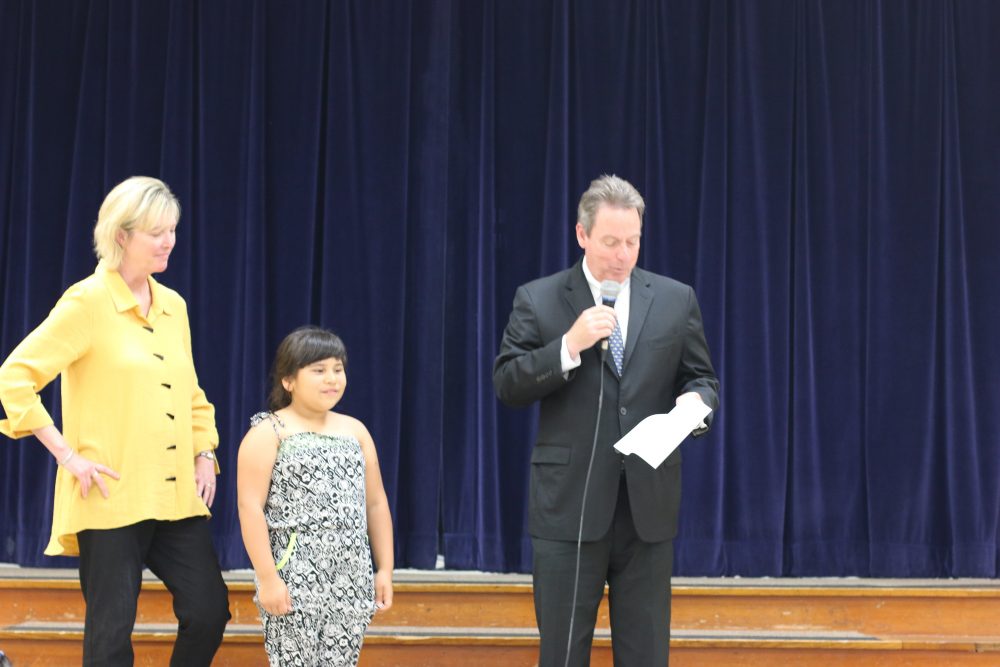 Students, faculty and parents came together at R.H. Dana Elementary School on Friday, May 31 to present awards to students at the end of the third trimester of school. Former councilmember Scott Schoeffel was in attendance to present his “Excellence is Elementary” scholarship to two students at the school. Principal Kristen Nelson expressed gratitude about the scholarships when introducing Schoeffel to the students.

R.H. Dana is on track to integrate a Dual Immersion 50/50 program, English and Spanish, so the assemblies were presented in both languages. The two assemblies were split based on grade levels; one was K-2 and the other was 3-5. The scholarships went to a student from the highest grade level in each assembly.

Alondra Alvarez Petronilo, fifth grade, and Lucero Lecona, second grade, both were presented the “Excellence is Elementary” scholarships at their respective assemblies.

Petronilo and Lecona were both nominated by their teachers and faculty on the basis of having good grades, outstanding dedication, the utmost respect for everyone around them, as well as being problem-solvers and role models for their peers.

Petronilo and Lecona also received other awards during their assemblies for Perfect Attendance and Student of the Trimester. At the end of the assemblies, students had smiles from ear to ear, posing for pictures with their certificates.

Schoeffel, a resident of Dana Point for more than 30 years and a public servant for 20 years, has always felt it’s important to give back to the community. Schoeffel has helped fund local music education programs, such as SOCSA at Dana Hills High School. He recalls honoring students at their awards ceremonies, all dressed nicely and excited to be recognized for their passions. That’s how “Excellence is Elementary” came to be. He began this scholarship in 2013 and has honored other schools, such as the R.H. Dana Exceptional Needs School and Palisades Elementary School.

“All the bright futures start here,” Schoeffel said. His focus is to support, encourage, and recognize children for their accomplishments from the start of their school careers to keep them on the right path. He believes that this kind of recognition matters most when students are young. It’s something that they can remember fondly, something that stands out from their childhood, he said.