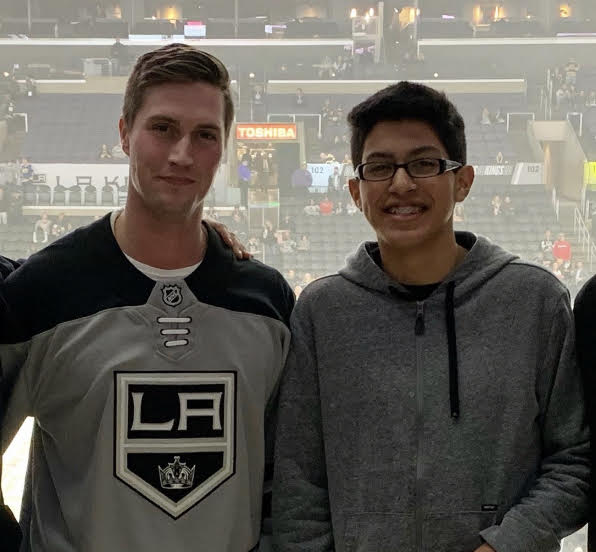 Former Camp Pendleton Marine Zachary Stangle was named as a 2022 Big Brother of the Year finalist for Big Brothers of Orange County.

The announcement was made on Jan. 6, at the start of National Mentoring Month. Stangle is one of five big brothers and five big sisters from across Orange County to be named as finalists.

Sloane Keane, CEO of Big Brothers, Big Sisters of Orange County and the Inland Empire, explained in the Jan. 6 press release that finalists were recognized for helping to empower their littles and “ignite their inherent potential so they can navigate difficult situations and thrive.”

“Our volunteers continually raise the bar when it comes to their mentees, and this past year is a testament to their dedication to shaping brighter futures for our youth,” Keane wrote in the announcement.

After Stangle left the service at 22, he settled down in Dana Pont and joined Big Brothers of Orange County. Having been a senior leader in the Marine Corps, he felt that he wasn’t done helping others grow.

“It was important for me to continue that leadership and giving back, so I started looking at different ways to do that and found Big Brothers, Big Sisters,” Stangle said.

“I’ve lived a very exciting, interesting life,” Stangle added. “I’ve (run) with the bulls, and I was shot in the face when I was overseas; skydiving, bungee jumping, rustled alligators. I’ve done just about everything there was to do, and I would say that that Big Brothers, Big Sisters and Elijah specifically have given me more excitement, more purpose than any of all those exciting things that I’ve done.”

Stangle was matched with his little brother, Elijah, in 2013, when Elijah was in third grade.

“In full honesty, it was difficult in the beginning,” Stangle recalled. “I mean, I’m 22 years old, I’m fresh out of the Marine Corps, served overseas, and now I’m hanging out with an 8-year-old kid trying to make a relationship out of the clear blue sky.”

Now, Elijah is a senior in high school.

“Today, it’s really incredible to see he went from wanting to be a bagger at a grocery store to now he’s looking at veterinary schools and that kind of stuff,” Stangle said.

A spokesperson for Big Brothers, Big Sisters of Orange County and the Inland Empire explained last week that “with a mentor on their side, youth are more empowered to achieve milestones such as high school graduation, set postsecondary goals and strive for long-term success as they achieve their full potential.”

Stangle admits that he struggled academically in high school, which gave him the perspective to realize how important a good education and applying oneself are.

“Elijah has always been just brilliant; I mean, there was a time that he wanted to be a mathematician,” Stangle said. “I really just tried to encourage him to keep that momentum, because I started off a lot like him—very good at school, and then in high school, completely fell off.”

“I just wanted to make sure that he didn’t make the same mistake that I did and (that he) pursued an education that is going to be the foundation for his future success,” Stangle added.

Stangle has now been with the program for nine years and watched Elijah grow up from the 8-year-old boy he met in 2013 to the young man preparing to graduate this year.

“I’m just extremely honored and grateful to have been part of this organization and part of that young man’s life, to watch him grow,” Stangle said. “I’ve, you know, taught him to swim, to ride a bike, to drive a car. Those are all things that he gets to carry with him for the rest of his life, and those are things that I was able to share with him. … I’ll take that any day of the week over running with bulls or skydiving.”

Big Brother and Big Sister of the Year winners will be announced on Jan. 20 at the Pacific Club in Newport Beach.