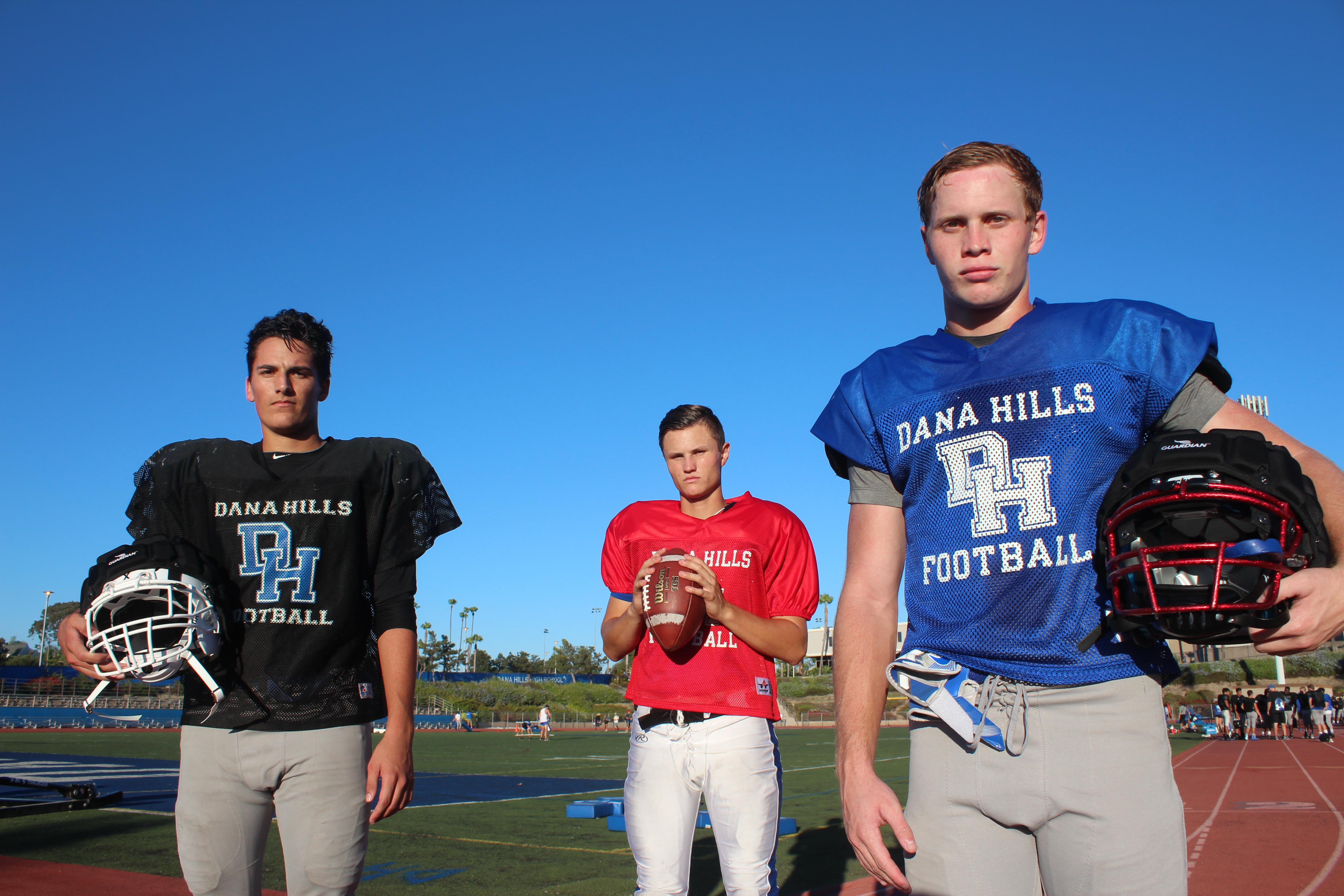 After winless campaign, Dana Hills heads into 2016 hungry for success

Last season, the veteran coach saw his team, a group made up primarily of sophomores, go through a gauntlet of a schedule. Every time the young Dana Hills football team was tasked with taking the field against tough, nonleague opponents and talented South Coast League teams, they toed the line.

Following a winless season, the large group of returning players showed their coach yet again that they are a resilient bunch throughout a busy offseason passing league schedule. The Dolphins competed in passing league tournaments almost every week this offseason, and had a strong showing at the Huntington Beach Summer Passing Tournament on July 23. The Dolphins won their opening game against Damien and found themselves in a tight game with Corona in pool play. With the clock winding down, the Dolphins edged out a victory on a last-second drive.

“There were a lot of good moments in (that tournament) where they continued to show that they’re getting better and better in battle-type situations,” Skinner said. “These guys got their lumps (last year) and got tougher for it, and they’re hungry to get that win. There’s some value in that. They’re hungrier than any other group I’ve seen in the past and that’s good.”

Dana Hills returns 13 starters from last year’s team, and many of them are now juniors. The team is searching for its first win in over a year, and will get a chance to do so when it opens its season at home against Marina on Aug. 26.

As part of an identity overhaul, the defense wanted to adopt a tougher, grittier persona. They took to calling themselves ‘the dark side’, and the black jerseys just made sense. When defensive players showed up to practice, they would be in black. Now that school has started, Skinner sees pockets of his defensive players walking through the halls wearing the same black shirts.

“The offense are always the good guys so we’re the bad guys,” junior linebacker Julian Casillas said. “We’re supposed to shut down our offense (in practice) this year and that’s helped us play together. It builds chemistry and bonds us together.”

Casillas is one of the defense’s best players, and he will return to the middle linebacker position. Casillas was awarded first-team All-South Coast League honors last season. Junior Joe Wilske, a second-team all-league selection, returns to play outside linebacker.

The Dolphins have speed in the secondary, and will be led by returning senior Ryder Lynch. Junior Blake Rubio and Gavin Pappagalo will also get time at defensive back positions.

Up front on the defensive line, returning junior Hunter Steele will lead at defensive end.

“(The defense) is a little bit of a mean and nasty group and they’ve taken hold of that. It’s really good that they have that identity,” Skinner said. “They’re good kids, obviously, but they’re trying to develop that tough defensive mentality.”

The Dolphins defense allowed an average of 54.9 points per game in 2015, and will rely on its new attitude and experience to turn things around.

Last season was a learning experience for quarterback Corey Cisowski and the Dolphins offense. The unit was only able to score an average of 8.9 points per game.

As a sophomore, Cisowski threw for 1,209 yards and six touchdowns to 16 interceptions. He completed roughly 40 percent of his passes. The Dolphins’ busy offseason, coupled with his experience competing against top-tier defenses as a sophomore, has Cisowski confident he can help move the chains in 2016.

Skinner said Cisowski has honed his ability to read defenses, which freed the Dolphins up to run more play-action in the offseason and get their speedy playmakers the ball.

Sophomore Jake Baldivias was called up as a freshman last year to be the team’s running back in league play, where he impressed the coaching staff. Baldivias returns to the backfield and will share time with junior Jack Oliver.

Lynch and Pappagalo give the Dolphins dynamic speed on the outside at receiver, and will be complemented by slot receivers Joe Tonini and Matt Sanford.

“(The offense) is a really good core group of guys that I feel I can go all around the field with. I don’t just rely on one or two guys,” Cisowski said.

In the offseason, the Dolphins and El Toro moved from the South Coast to the Sea View League. Skinner is hoping Dana Hills’ nonleague schedule will prepare them for what he believes is an evenly matched league.

Although they have been competing in the South Coast League since 2014, the Dolphins will be familiar with their new league opponents. Dana Hills got to see Laguna Hills, Capistrano Valley and Aliso Niguel up close in passing league tournaments over the summer. It’s not the same as competing against a team in pads, but it gave the team a chance to see what they’ll be up against come winter time.

“It’s a good level of competition. I think in each game, any team can beat anybody,” Skinner said of the Sea View League.

Last year’s schedule was not kind to the Dolphins, but they are champing at the bit, waiting for the new season to begin.

“The mindset (last year) was we were going to go out and do the best we can,” Cisowski said. “This year, we have more of a winning mindset and we’re using that as a chip on our shoulder to go out and win some games.”