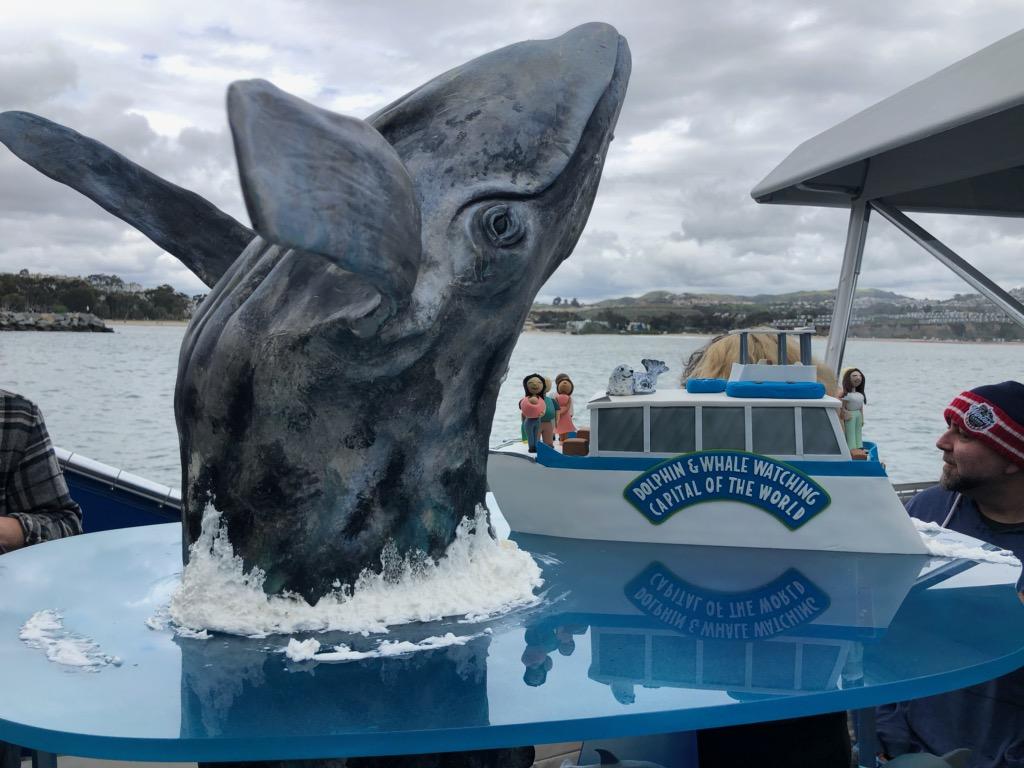 In March, the Food Network’s cable-TV baking show Duff Takes the Cake centered an episode on Dana Point’s Festival of Whales and the work that Donna Kalez and Gisele Anderson had put into securing a trademark to make the city the official “Dolphin & Whale Watching Capital of the World.”

Since then, the novel coronavirus put an abrupt halt to the second weekend of the Festival of Whales’ 2020 festivities and whale watching for nearly three months. But the airing of the episode on Monday, June 15 comes as businesses begin to reopen, offering glimmers of hope.

The presentation was made aboard the OCean Adventures catamaran on March 14, a combination celebratory cake reveal party and whale watching excursion.

“The artistry and authenticity Duff and his team put into every cake is second to none,” Swayne said. “We knew Donna and Gisele would be blown away. We were so excited and thankful to be able to share this amazing honor with two very deserving women. Duff and crew delivered as usual. It was a whale of a day. The realism of the gray whale depicted in the cake was amazing, but the mini Donna and Gisele sculptures aboard the whale watching cake catamaran were so cute, they nearly stole the show.”

Kalez went into the 2020 year optimistic about celebrating the trademark she had secured with Anderson in addition to the 49th year for the festival. But state directives to close nonessential businesses yielded stark consequences for Dana Wharf Sportfishing and Whale Watching, as well as Capt. Dave’s Dolphin Safari.

Kalez, the manager of Dana Wharf Sportfishing and Whale Watching, had to issue thousands in refunds to hundreds of people and groups who had booked whale watching and fishing trips. Whale watching trips are often dependent on hotel bookings. With hotels having zero occupancy throughout the stay-at-home order, zero reservations meant zero income for the business and having to lay off 42 employees. In June, she brought back 20 employees and is now taking small steps toward normalcy. Dana Wharf is now offering fishing trips and whale watching excursions at a limited capacity with added safety precautions.

Disinfectant solution is available on the vessel for public use. Both passengers and crew members are required to wear face coverings. The crew also washes their hands every 30 minutes and wears gloves when possible. Loading is executed by using space marks, to allow for distancing between guests, thus avoiding crowded lines, and vessel capacities have been limited to avoid large gatherings and to provide social distancing. Indoor areas are monitored to limit the number of people who can be inside at any one time. After each trip, the vessel is cleaned again and sanitized.

“We can’t do music cruises or large fishing trips. The Dana Pride can board 149 people, but we are only allowing 50 right now,” Kalez said. “We were still taking calls (during the stay-at-home order), and anglers were desperate to get out on the water. We’re able to do fishing trips, but it’s taking baby steps.”

“It’s blue whale season, but we are seeing a tremendous amount of humpbacks. We saw six of them during one excursion,” Kalez said. “We’re just happy to be back out on the water. It isn’t under the circumstances we want, but one step at a time.”