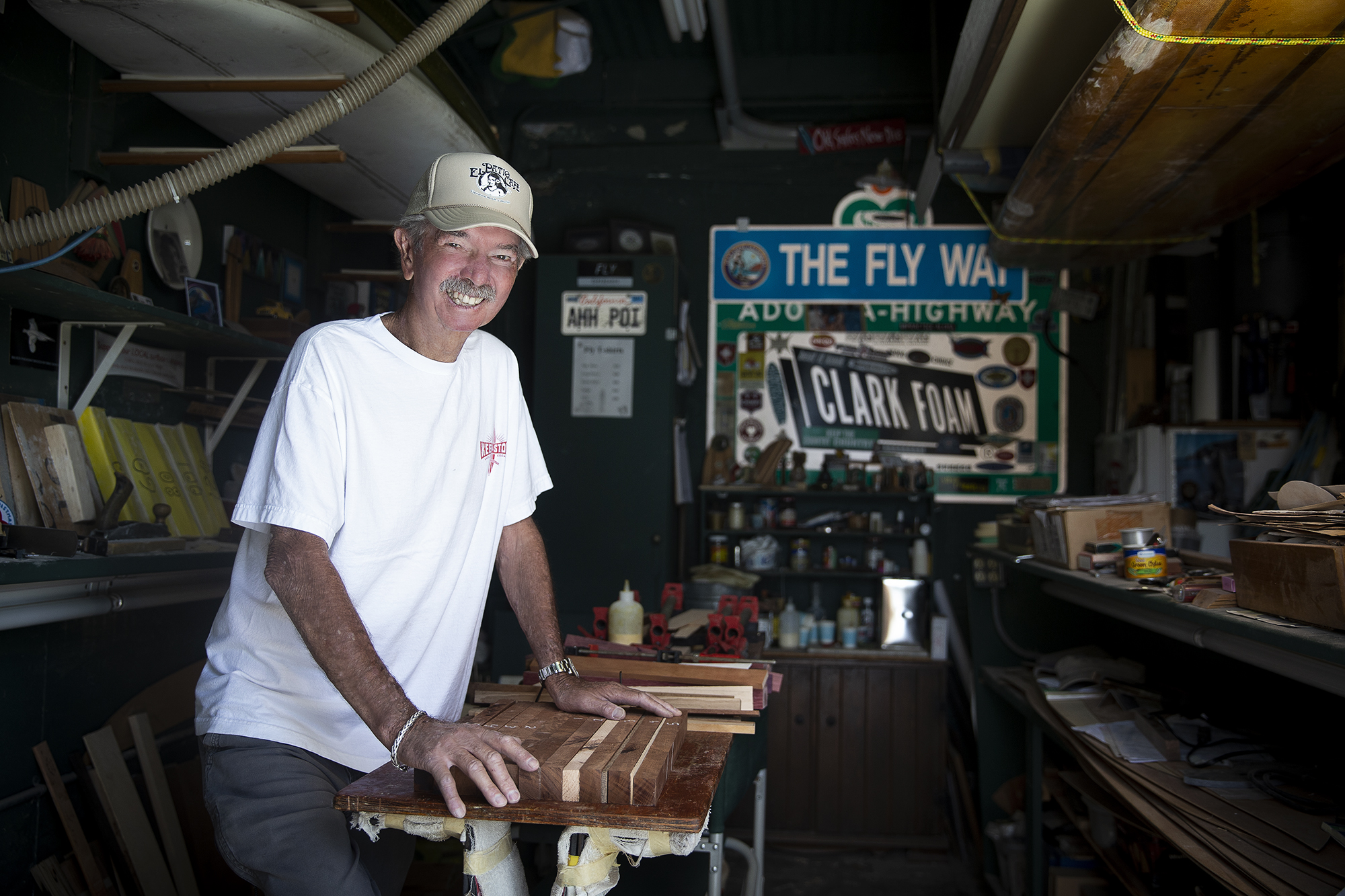 Fly Is the Guy

From crafting beautiful surfboards to sharing stories, ‘The Fly’ Van Swae has seen and done it all during his life in the surf

“Everybody thinks it was because of Nixon that surfing Trestles in the ’70s was illegal, but that’s not exactly the whole story,” says Jean Pierre Van Swae.

It’s a sunny afternoon, and we’re sitting outside Olamendi’s on Coast Highway, eating tacos and telling stories over a couple of cold Pacificos. Van Swae, more commonly known by his nickname, “The Fly,” has no shortage of tales to share. Over the course of his lifetime at the beach, he’s pretty much seen it all.

“Surfers were always browning the train back then, and the folks at the railroad got together with the folks in the military, and that’s really what started the problems down there,” he says, smiling.

“Browning the train?” I ask.

Surfers haven’t always been known for their mature, reserved behavior, and whether mooning the train was actually the impetus for their being barred from Trestles during the ’70s or not, it’s a hell of a story.

Van Swae was actually born in Belgium before landing in Southern California as a youngster. By 1961, he was gainfully employed at Wardy Surfboards, based in both Laguna Beach and Pasadena. A quick study, he graduated from shop rat to surfboard craftsman. He was especially gifted when it came to the art of making fins and glassing boards.

“Everything was changing so fast during those days, you really had to understand how everything worked together to make a good board, and creating fins was kind of my entry point into it all,” Van Swae explains.

Over the course of his career, Van Swae was part of the production team for many a surfboard label, but perhaps most notably for both Dale Velzy and Hobie Alter.

“Those two guys couldn’t have been more different. Velzy was a hustler, a cowboy. Hobie was by the book and paid attention to every detail. They had different visions for their businesses, but they were the two that really started everything,” Van Swae continues.

It seemed everybody back in the day had a nickname. For instance, Velzy was known as “Hawk.” When asked where he got his nickname, Van Swae smiles.

“My friend Del Cannon told me one day we were going to jump out of airplanes. I’d never been skydiving before, but it sounded fun,” he remembers.

Van Swae was also part of the two-man team that built Flippy Hoffman’s famous “Awhoo” board. A 15-foot blade created for tackling Hawaii’s outer reefs, it was shaped in 1977 by local legend Micky Munoz in a backyard on the north shore of Oahu and eventually glassed by Van Swae.

There’s a hand-written note on the board offering a $3 reward for anyone who found the board floating in the channel if he’d lost it. The board is currently on display at the Surfing Heritage and Culture Center in San Clemente.

Today, Van Swae continues to craft beautiful boards under his own label: Fly Surfboards. As of late, he’s also gotten into woodworking. Creating exquisite paddles, hand planes and cutting boards, it’s become a labor of love for him.

“I really enjoy going up to the lumber yard, picking out different woods and putting them together to create something new,” he says. “There are so many different types of woods with different grains and colors, it can be a really creative process. It kind of reminds me of how I started making fins back in the day. “

For a close-up look at Van Swae’s work or to get in touch with him about ordering a board or a new cutting board (they make amazing gifts), be sure to give him a follow on Instagram at @fly_woodworks.