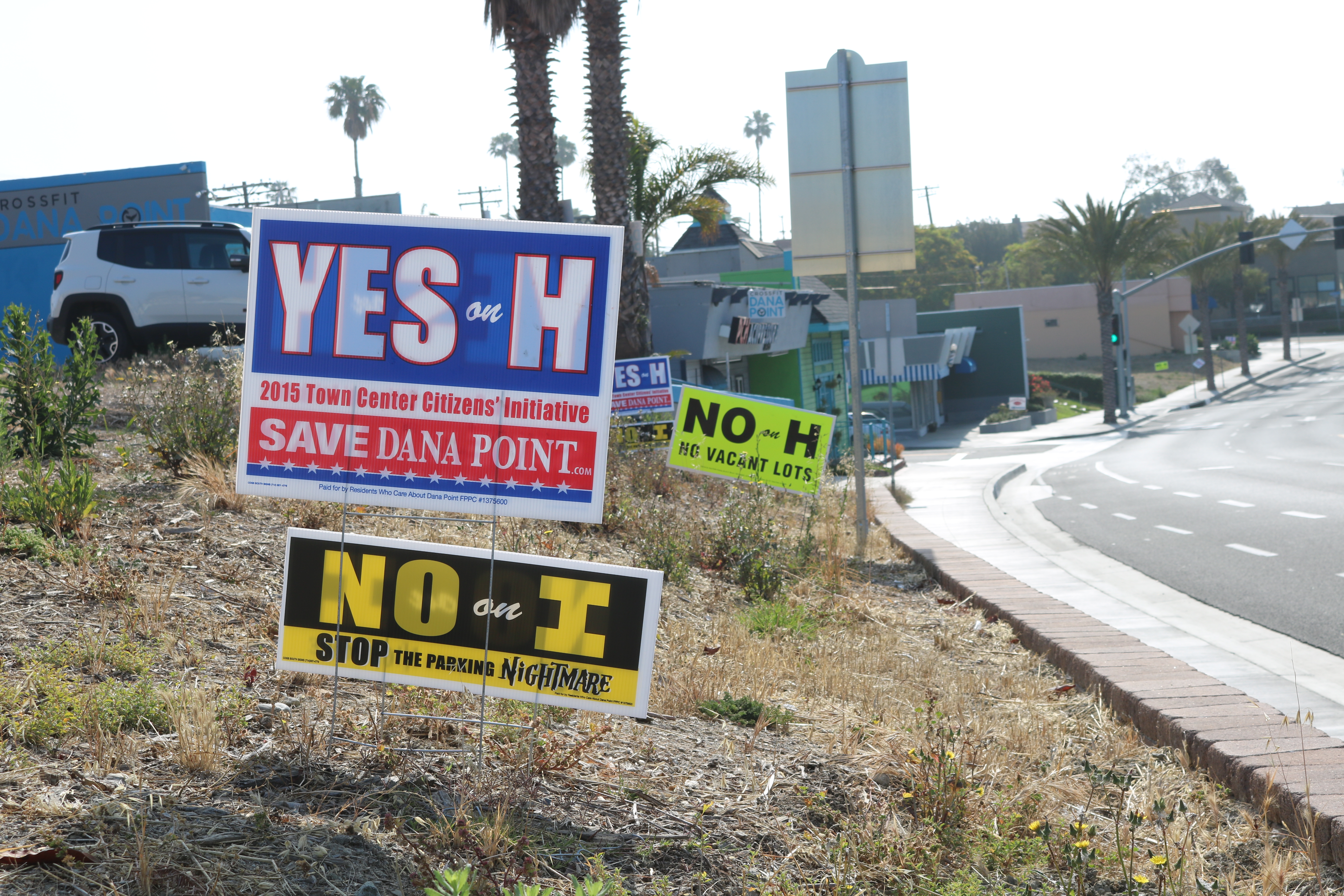 First Reactions from Both Sides after Measure H Passes, Measure I Fails

In a heated election with two competing ballot measures going before voters, it was Measure H that ultimately secured the most votes during the primary election Tuesday, June 7.

Measure I—the City Council-sponsored “Town Center and Public Parking Improvement Measure”—brought in 41.1 percent (3,379) of votes in favor, and 58.9 percent (4,834) opposed to it.

To win, a measure needed to secure 50 percent of the votes plus one. If they had both received more than 50 percent, the measure with the highest number of votes would’ve won.

Dana Point City Clerk Kathy Ward could not confirm when the official results would be released, but both sides seem to have come to terms with the results already.

Dana Point Mayor John Tomlinson said he does not agree with Measure H for a couple of reasons.

“Personally, I still do not agree with Measure H because I believe that it will hamper development by severely restricting responsible planning and mixed-use development within the Lantern District,” Tomlinson wrote in a statement to the Dana Point Times.

Tomlinson stated an independent fiscal analysis indicated the city will lose about $673,000 annually in the general fund revenue under Measure H.

“That said and more important, I respect the will of the voters,” Tomlinson stated. “The voters who elected me in the last election have spoken and I will abide by their decision.”

He added once the Orange County Registrar has certified the election, he will work with the Council and city staff to “process the necessary Local Coastal Plan Amendment (LCPA) with the California Coastal Commission.”

He said that LCPAs do not happen overnight, and asks for residents to be patient with the process.

“Finally this issue has been very divisive, with accusations of bullying and disrespectful behavior to others. As neighbors, we need to work together to put the past six months behind us and to come together as a community to continue to make Dana Point the special place that we have all become proud to call home,” Tomlinson said.

Harold Kaufman, a Dana Point resident who was in favor of Measure I, said he also did not agree with the results.

“I am disheartened at the lack of vision of the voters who believed the hype and rhetoric of Measure H,” Kaufman said.

The Town Center Plan has had a long road with the city, starting back in 2004 when the city began talks of developing the area now known as the Lantern District.

The city began a planning process, which included receiving input from its residents, and creating a 15-member panel called the Town Center Subcommittee. There were more than 30 meetings to discuss ideas and design concepts.

In June 2005, the city adopted 10 key principles to use going forward with the Town Center development. The plan discussed parking and stated the Council would “acquire land in the Town Center for a centralized parking facility(ies) funded by fees from new building construction and located in a parking district.” It also laid out the city would, at least, create an off-street parking district, and create opportunities for shared parking. It required developers to provide parking according to existing city code and allowed developers to create off-site parking to meet their parking requirements or pay to offset costs of creating their required spaces elsewhere.

The plan also stated building heights could not exceed 40 feet and three stories, measured from the level of the sidewalk at the midpoint of the front property line.

This ordinance was passed in 2008, and received approval from the California Coastal Commission. With the economy not in the best shape, nothing happened with Town Center.

In July 2014, a developer group called Majestic Partners submitted plans for a mixed-use building calling for construction of 30,000 square feet of retail space and 111 residential units to be built on seven non-contiguous lots in the Lantern District.

The Planning Commission voted two in favor and two against the project, which means the plans did not pass. Majestic then appealed to the City Council, which approved their plans in a 3-1 vote.

The project was later acquired by the group Raintree Partners, and development plans changed slightly; it included 32,500 square feet of retail space and 109 residential units.

In 2015, the Council voted to amend the Town Center plan, which changed the name of the plan to the Lantern District Plan, amended the parking regulations for new development and included the allowance of non-residential projects to pay fees in lieu of providing parking spots.

With Measure H, “Any aggrieved person or Dana Point registered voter shall have the right to maintain an action for equitable relief to restrain any violation of this Act, or City failure to enforce the duties imposed on it by this Act.”

Also with Measure H, any zoning changes would have to go to a vote of Dana Point residents as well as be approved by the Coastal Commission.

OTHER RESULTS FROM THE ELECTION

The measure amends the county charter, and authorizes the board to establish a campaign finance and ethics commission. The measure adds the Finance and Ethics Commission Ordinance, which establishes a five-member commission to provide administrative oversight to the Orange County Campaign Reform Ordinance and the county ordinances regulating lobbyists, gifts and certain provisions of the County Code of Ethics.

Ballot Measure B: Require fiscal impact statement for any countywide measure placed on the ballot

The measure amends the county’s charter to require the auditor-controller to review any countywide measure placed on the ballot, and prepare a fiscal statement. This applies to both the county voter initiatives as well as measures placed on the ballot by the Board of Supervisors. The statement must estimate the amount, if any, of any increase or decrease in revenues or costs to the county and any applicable funding source, or funding mechanism, if the proposed measure is adopted.