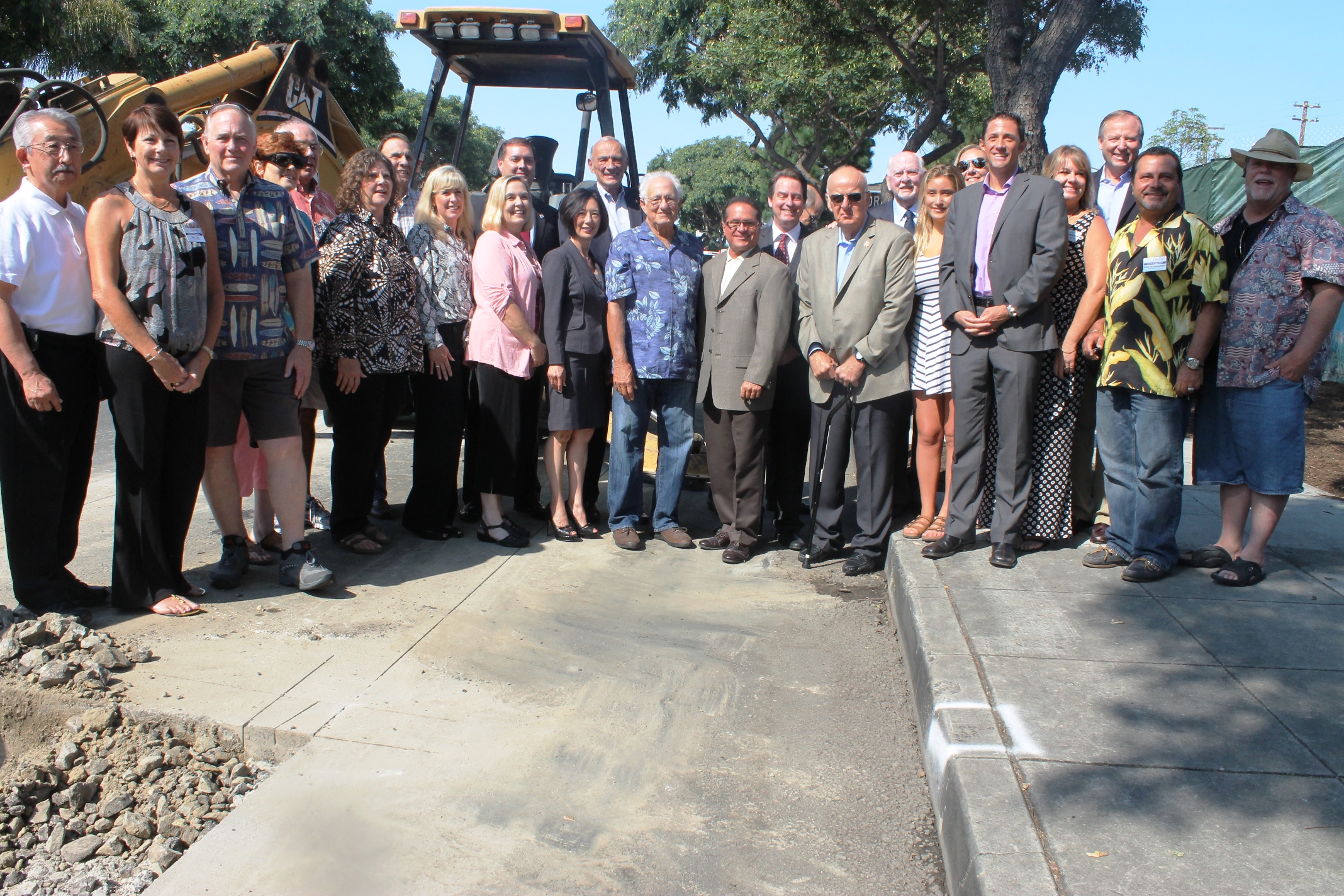 Its official, shovels are in the ground.

As promised earlier this year, the South Coast Water District has dug its first hole to replace underground water and sewer utilities along Pacific Coast Highway. The presence of heavy machinery and work crews along the roadway mark the second sign of visible changes coming to Dana Point’s downtown corridor.

Since February, a retro-fitted sign has invited travelers heading north on PCH to “Town Center,” but until now, it remained the only visual of the $19 million project slated for the near 1-mile stretch of town.

“I’ve been at this now for what seems like decades, even though it was only approved seven years ago,” said Mayor Steven Weinberg. “It is good to see we are finally breaking ground and getting the Town Center project underway.”

Weinberg’s sentiment of relief that construction is “finally” underway was expressed by many in the crowd of over 50 that gathered Tuesday morning for a short groundbreaking ceremony. The group included members of the local business community and city and water district officials who have worked, and pushed, for years to get this project moving.

“I was on the City Council and mayor, and actually chairman of the Town Center Subcommittee with 15 other residents and business owners, and that was eight years ago,” said Wayne Rayfield, board president of the SCWD. “Today we actually have a hole in the ground … we are all thrilled.”

The project itself has been a topic of discussion for two decades.

Initial plans to create a pedestrian-friendly downtown, in order to promote mixed-use developments where residents can live, work and play, were approved by the Dana Point City Council in 2006. The San Francisco-based firm, ROMA Design Group, was hired to create such plans in 2004 and a citizen subcommittee was formed the following year.

Designs to make Pacific Coast Highway and Del Prado Avenue two-way roads, create bus stops, add medians and change the landscaping, got the OK from the California Coastal Commission in 2007. But with the economic downturn following the next year, construction plans ceased.

The project gained momentum last year during the city’s election cycle, and with the formation of a citizen coalition by former mayor Harold Kaufman, the subject was brought before the public once again.

While it appeared the project had halted, a series of City Council meetings and public forums earlier this year shed light on the behind the scenes work being done. City and SCWD engineers worked to finalize plans to replace underground utilities and make changes to the street-level landscape, which were approved by both entities’ delegating bodies this spring.

In May, the City Council approved a two-year operating budget that allocated $9.2 million to fund its first phase of Town Center construction. The money needed to complete the full project along Del Prado has not been set aside, as city officials have held, developers could help foot the estimated $8 million bill.

As for the water district, plans to replace underground water and sewer lines throughout the Town Center corridor in order to support future growth were approved and $5 million set aside to complete the work. During utility construction, the district’s hired firm will also replace the city’s storm drainage system.

Construction is being approached in phases with the water district starting and completing utility work before the city begins street-level changes. The water district will tackle Pacific Coast Highway first and replace lines from Copper Lantern to Blue Lantern over the next three months.

Once finished, the city will come in to complete median, sidewalk and landscape work. Construction along PCH is expected to last through October 2014, at the end of which, traffic will travel in two ways down the now one-way road. At the same time the water district can begin construction on Del Prado utilities.

Both city and water district officials have confirmed outreach will be done to address any issues that may arise and work is being done to mitigate effects on residents and businesses.

PHASE I: The South Coast Water District began construction this week to replace water and sewer utilities along Pacific Coast Highway, between Copper Lantern and Blue Lantern streets. In an agreement with the city, the water district’s hired construction firm will reconstruct portions of the city’s storm drainage system. Work is set to end at the start of 2014 and two lanes of traffic will be open throughout.

PHASE IA: With the completion of work on PCH utility lines, the city will begin work along the roadway to add medians, widened sidewalks, bus pullouts, street signage and landscaping. Construction is expected to last until October 2014. PCH will be turned from a one-way to two-way street.

PHASE II: Once phase utility work is finished, the water district will switch gears to Del Prado Avenue to replace sanitary sewer, water and storm drainage systems from Blue through Copper Lantern streets. While dependent on the time it takes to complete PCH utility work, Del Prado could see construction beginning in February 2014. Two lanes of traffic will remain open throughout construction.

PHASE IIA: The city has no timeline for the final phase of Town Center work along Del Prado. Funding for this portion of the project has not been allocated, but officials believe it will be helped along by developers. Changes to Del Prado will include new medians, sidewalks, bus stops and pullouts, landscaping and street signage. The road will also be turned from one-way to two.

Information provided by the South Coast Water District and city of Dana Point.