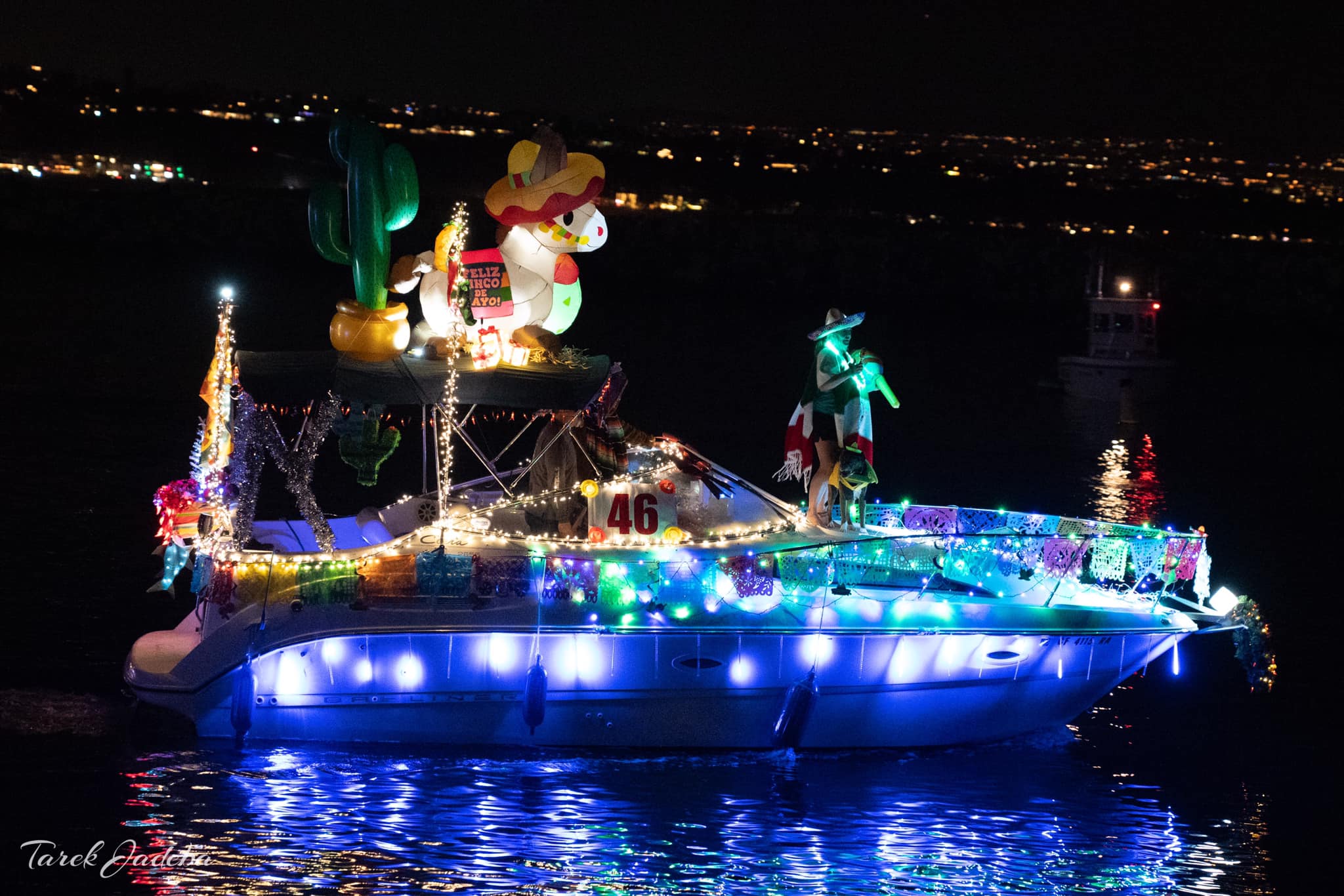 With the 46th annual Dana Point Boat Parade of Lights coming to a close this past Sunday night, Dec. 12, judges are now deliberating on winners for the various festive categories. The winners will be announced early next year.

This year’s boat parade ran for one weekend, from Friday-Sunday, whereas in the past, the boat parade has run for the first two weekends of December. With the first weekend of December falling immediately after Thanksgiving, the Marina at Dana Point felt that it would be challenging for boaters to be ready in time for the parade.

“We were excited to have the opportunity once again to host the parade,” said Kelly Rinderknecht, general manager of the Marina at Dana Point. “This year, it was the 46th annual Dana Point Boat Parade of Lights, and we carried over the theme, which was Fiesta holiday.”

The Fiesta Boat Parade of Lights had been announced at the 2019 award reception to be the following year’s theme; however, when 2020’s parade was canceled due to the pandemic, the Marina decided to carry on the theme to 2021’s parade.

The Marina at Dana Point, which took on parade-organizing duties in 2019, hopes to gain boaters’ input on next year’s theme, as well as whether the parade should run three days over one weekend or four days over two weekends.

“Of course, like the theme, we’re going to do a little bit more research and see what people want, what the boaters want and do it that way,” Rinderknecht said.

However, some boaters felt that they had nothing to celebrate this year.

“The spirit of Christmas in the harbor this year, versus previous years, is so much less than what it was because of the pressure that’s being put on the various slip renters for slip increases or changes in policies and procedures and restrictions and fear of retribution,” said Wayne Addison, of Save Our Slip (S.O.S.). “The attitude, in general, is there’s nothing to celebrate.”

After supporters of S.O.S., a boater advocacy group, reached out to Addison and George Hughes of S.O.S. to ask the two live-aboard boaters what to do about the Dana Point Parade of Lights, the group landed on a few suggestions for boat owners.

“Don’t decorate and stay in your slip, or if you really must decorate because you have kids … go ahead and decorate the boat but keep it in your slip; and if you are forced to go out in the parade by whomever and you feel somewhat reluctant to do it, but you’re going to do it anyhow, put a little sign up that says ‘Support the SOS, Save Our Slips,’ or something like that,” Hughes said.

SOS also encouraged its supporters to boycott the boat parade.

“Well, it was a unity thing,” Hughes said. “This was an easy way for people to go ahead and protest that wouldn’t be necessarily identified. And it’s something as simple as ‘we had other plans for those nights.’ So, it was a way for them to do this anonymously.”

Hughes said that following last year’s hiatus due to COVID-19, and cash prizes offered to the winners of the boat parade, that one would expect there to be more participants than ever.

According to Rinderknecht, 70 boaters signed up to participate in this year’s parade. In 2019, the Marina had 84 participants.

“Throughout the years, I’ve been in the harbor 24 years, and I’ve seen the parade most of those years—all of them, I think—and it varies throughout the years. But typically, you’re going to find, you know, somewhere between 40 and 80 boats,” Rinderknecht said.

However, Addison and Hughes felt that morale in the harbor was down, as boaters struggled with the October slip increase. Hughes added that as a disabled Vietnam veteran, living aboard his boat in the harbor on a fixed income, he is facing eviction because he is unable to afford the increase in slip fees and living expenses.

“Why there has been a lack of participation in the boat parade this year is because most of the people in the harbor are realizing that this is not what the harbor used to be,” Addison said. “It’s now something that is for, what appears to be, for the privileged people, those who can afford it and not question these ridiculous price increases of 26% to 95%. The morale in the harbor is just terrible. So, you can’t expect an exciting, exuberant parade of participants if everybody’s getting the blues because of what’s going on.”

Among the festivities, however, Rinderknecht felt that the marina saw the community come together to celebrate the holidays.

“There was so much festive excitement going on, particularly during the parade, and we were focused on that,” Rinderknecht said. “I didn’t notice anything out of the ordinary, I didn’t notice any, any protests or any boycotts. What we mostly saw was just excitement and enthusiasm in the harbor, the community coming out and having a reason to celebrate the season.”

Awards will be announced in early January. The categories are Best Overall, Fantastically Fiesta, Most Original, and Best Use of Lights/Music/Animation, which all come with a $1,000 cash prize for the winner and $500 for the runners-up.