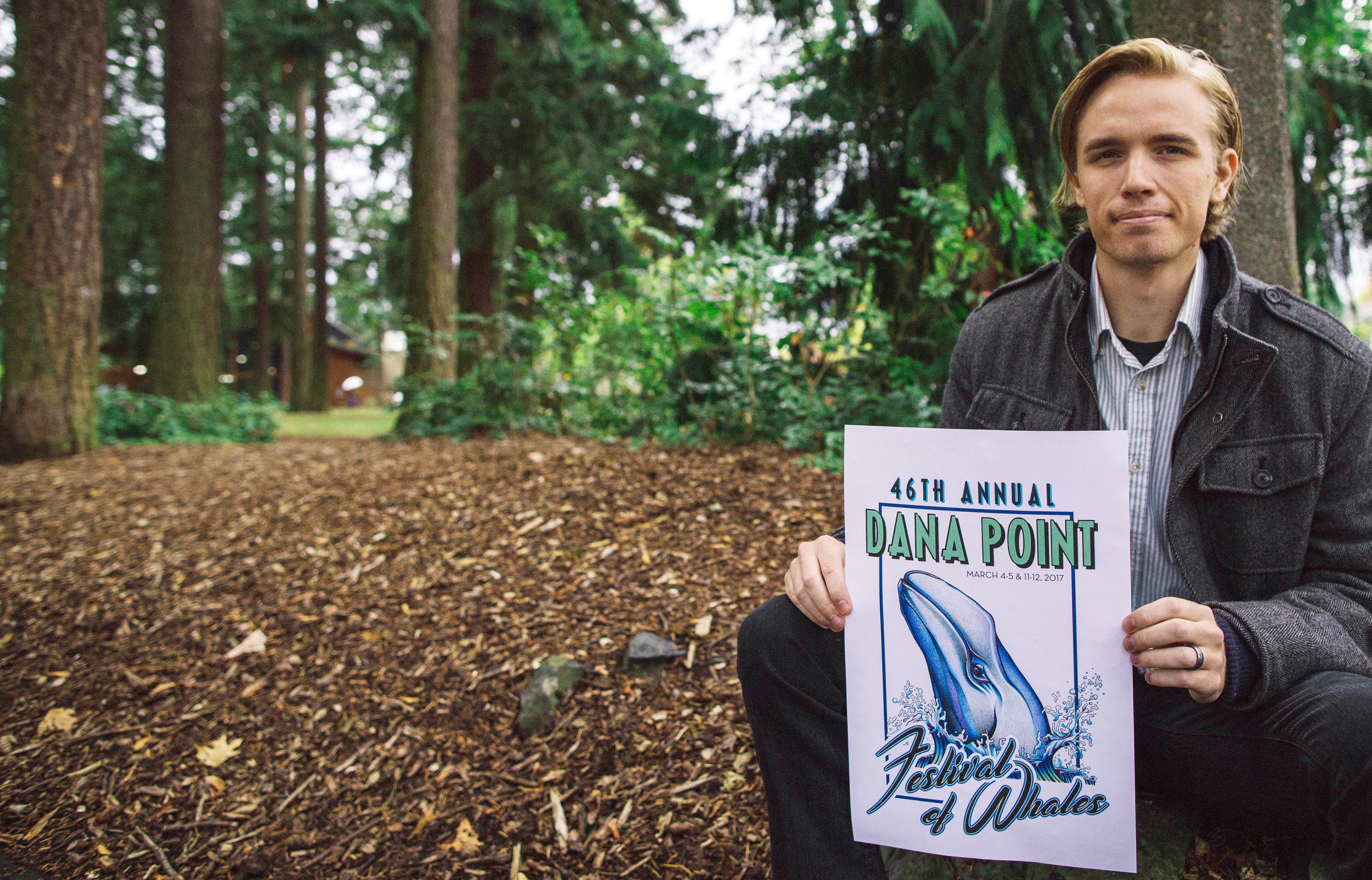 Using his love of whales as inspiration for a design, a Southern California native took home the top prize in the Festival of Whales logo design contest.

Alex Van Brasch, a Simi Valley native, who recently relocated to Portland, Oregon, was named the winner of the 2017 contest after he received the most votes from the public.

The logo contest was opened to the public, and submissions from all over the world were sent into the Festival of Whales Foundation Board.

“We got 58 great entries from all over the world,” said Andrea Swayne, event coordinator. “The Festival of Whales Foundation Board had a very difficult choice narrowing it down to five; we had so many excellent choices.”

Each of the submissions had to showcase the California gray whale, the name of the festival and the festival’s dates.

Swayne said when the contest was only open to Dana Hills High School students in the past, the criteria was slightly different to accommodate the school’s curriculum.

“By removing some of those requirements and opening it to the public, we allowed for greater creativity and received a large cross section of designs in various mediums,” Swayne said.

For Van Brasch’s logo, he said he used colored pencils and pen, and used the computer to add the text and align everything.

When the logo contest was announced, he said he didn’t know if he was going to submit anything.

“Someone had forwarded it to me in a message; I thought about it for a second and didn’t know if I was going to commit,” Van Brasch said. “One night I just started drawing this whale in colored pencil, there was no clear layout for the rest of the design.”

He said he drew the whale bursting out of the water “almost out of desperation.”

“It was also a celebration in a way,” Van Brasch said. “I wanted to bring some positivity to the table. It’s fun, it’s kind of classic but modern.”

He said he didn’t have a clear design for the rest of the logo, he just started creating it.

Swayne said submissions varied from crayon designs from young children to designs by aspiring artists, professionals and everyone in between.

“One of the reasons the Foundation Board narrowed it down to the chosen top five was the logos all evoked that spirit of the festival, they all had movement, and effectively showcased the California gray whale,” Swayne said.

She said the board also really enjoyed seeing the logos because they could tell how important the whales were to the artists.

“Even the younger children really had a passion and understood how important it is to learn about these animals and protect them and their environment,” Swayne said.

Van Brasch said he hasn’t been to the festival yet, but he has family in the area and has heard of it.

For the first time, the winner was not decided by the board, but by the public.

“We knew it would be a welcome change for the community to get involved,” Swayne said.

Along with the winning logo, Van Brasch received $500, two whale watching tickets and a choice of four pieces of event merchandise. His logo will appear on promotional materials for the festival including clothing, flyers, signage and more. He will also be making appearances during the first weekend of the event; in the parade and at a poster signing.

“I’m super honored,” Van Brasch said. “Any time the local scene embraces you or your work is so great. I know the power of community is very strong, and it’s humbling they’ve been so open to the artwork.”