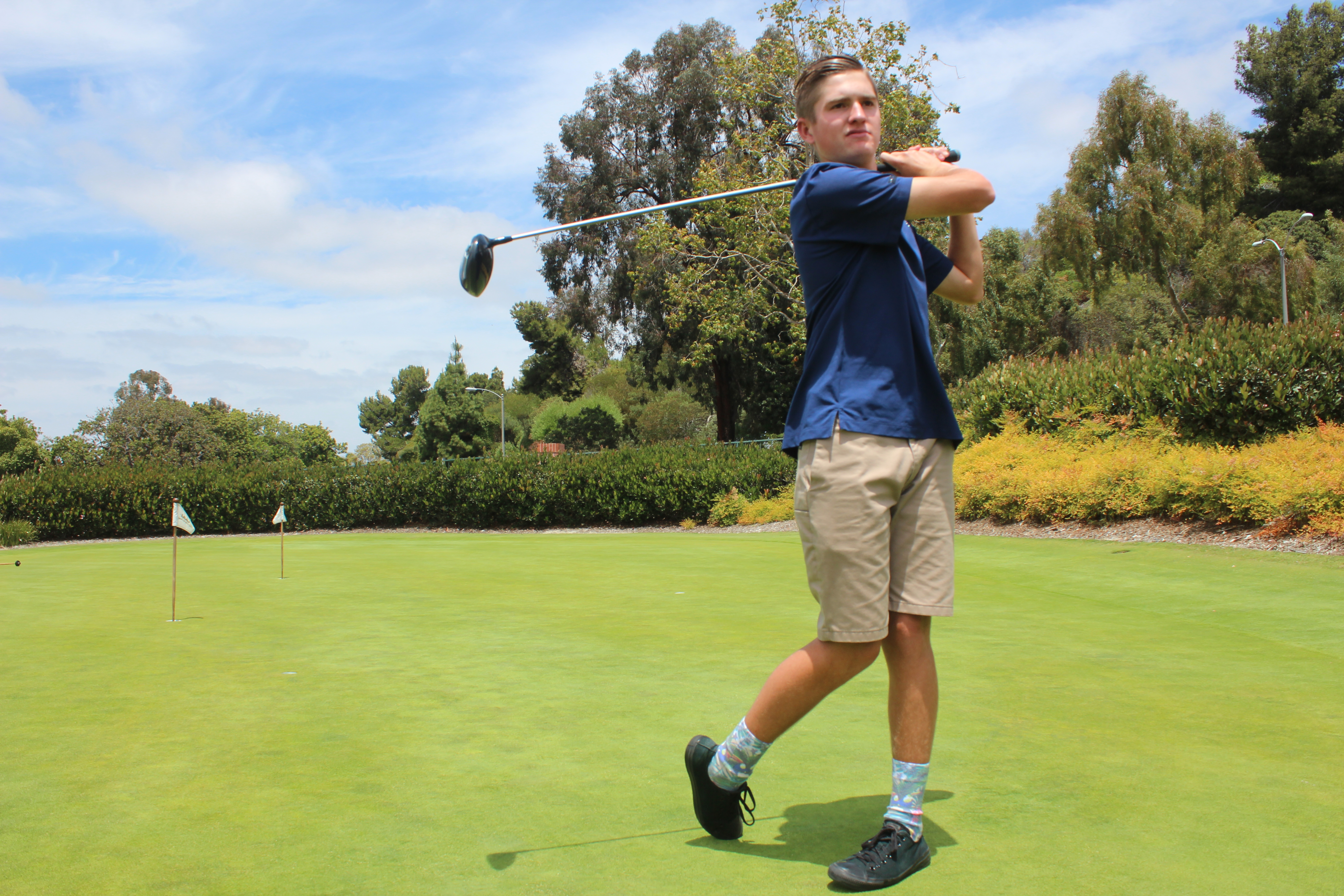 Clay Feagler enjoys the mental grind and attention that a good round of golf demands.

He pays close attention to how the green slopes, what the wind is up to and where a good spot on or near the green would be in case he misses his target. When he does miss, which has been a rarity over the past two weeks of CIF-SS postseason competition, he has a grinder’s mentality and a sharp wedge game that he relies on to get up and down and save par or, at worst, a bogey.

The Dana Hills High School junior had to have every shot in the bag at the CIF-SS Individual Championship tournament at Mission Lakes Country Club on May 21, where the wind blew steadily at 30 mph and gusts reached upwards of 50 mph. Feagler was able to string together three birdies and carded three bogeys for a tournament-winning score of 71, the only even-par round recorded in the field.

The elements Feagler faced at Mission Lakes could have upturned his scorecard at any minute but he refused to make any lopsided numbers in what he said was one of the hardest tournaments he’s played in.

“That’s what you have to rely on. You could be hitting it poorly but you have to have the grinding ability to shoot a good score,” Feagler said. “In golf, people have their good rounds but the key thing is how to play your bad rounds and make them good.”

Feagler has had a lot of success on the golf course. He made his first hole-in-one when he was 10-years-old and won his first junior tournament at 13. In high school, he won the CIF-SS Southern Individual Championship as a sophomore.

But where success has eluded him has been at the CIF-SCGA SoCal Golf Championship tournament at Brookside Golf Club in Pasadena. Feagler will tee it up at the tournament on May 28 with a shot at advancing to the CIF State Golf Championship at Poppy Hills Golf Course on June 3. He has made it to this stage of the postseason three years running.

The road to the state championship is difficult. Only nine players from both the north and south qualifying tournaments advance, the field is made up of the best golfers in the state and, because it is an SCGA sanctioned event, digital range finders are not allowed like they are in CIF-SS tournaments.

Murrieta Valley’s Sage Casaga won last year’s SoCal Championship with a 68 (-4). Feagler finished in a tie for 29th after carding a 75 (+3).

The margin for error is extreme in the high school golf postseason, which can ratchet up the pressure in an instant. Feagler is used to it. He plays with his father, a 7 handicap, and Dolphins teammates regularly at El Niguel Country Club in Laguna Niguel, where bragging rights are always on the line and performances are not easily forgotten.

Dana Hills head coach Glenn Forster has witnessed many of Feagler’s matches and uses the junior’s triumph at Mission Lakes as a testament to his resolve.

“It was crazy, you see kids just crumbling all over the golf course and then you see Clay. He just had this focus (at Mission Lakes),” Forster said. “It kind of separates him … There’s a joy in golf that you see in him. There’s a focus and he’s constantly learning from mistakes and conditions.”

Feagler admits his round at last year’s SoCal Championship could have been better but his hot putter and wedge game have him optimistic about advancing to state for the first time this year.

At the CIF-SS Southern Individual Regional on May 11 he recorded an eagle on a par-4 from 100 yards out on the third to last hole to finish fourth. At Mission Lakes, he had only 28 putts in the victory, well below his season average of 30 per round.

“Last year I thought I’d have a good chance to make it. It didn’t end up that way. You learn from your mistakes,” Feagler said. “This year I’m trying to do better. I just have to play one shot at a time, not get too worked up. If I do that I’ll have a good chance.”