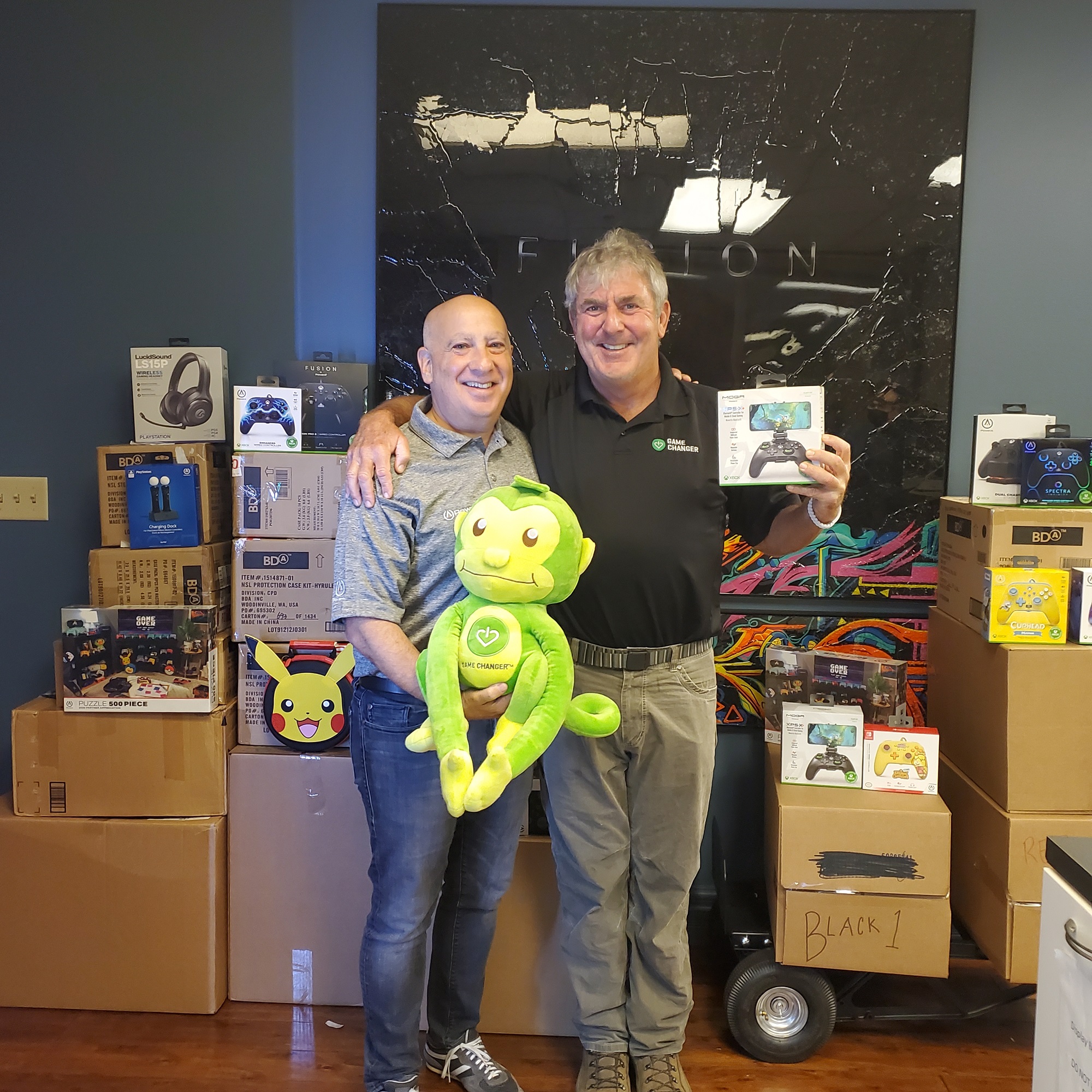 When Jim and Taylor Carol started GameChanger 14 years ago, Taylor was in the hospital being treated for a rare form of leukemia.

During that five-year battle with leukemia, he was often isolated in his hospital room. Videogames were a form of escape, a way to keep his mind active and a way to keep him connected with other kids.

Though Taylor received a lifesaving bone marrow transplant, the journey to recovery was often isolating.

“Our son had a bone marrow transplant, and he had long periods where he didn’t have an immune system, and he was sick, and so we had to work really hard to keep his spirit and his soul engaged,” Jim said of his son’s experience. “And we also saw other children who just checked out; and once a child checks out and just gives up, it’s not good.”

When he was in the hospital, the younger Carol carried around a green monkey stuffed animal. Now, that green monkey is used as the charity’s mascot.

The father and son founded GameChanger in 2007. Taylor was diagnosed with Philadelphia chromosome-positive leukemia in 2006, after being injured playing Dana Point youth baseball. The city was incredibly supportive, Jim said.

Over the years, GameChanger has worked closely with Dana Point’s mayors, from Lisa Bartlett to, more recently, Joe Muller.

As Taylor found comfort and connection in video games, Jim made it his mission to provide other hospitalized kids with access to games, movies and streaming content that provides relief from their pain and isolation, which worsened significantly under COVID-19.

“It was bad enough; before the pandemic, if your child got a horrible disease or an illness, it was terrible,” Jim said. “And then when the pandemic hit, it’s been atrocious. The health care workers have been afraid, they’ve been overworked and stressed.”

In early November, Jim began a road trip from San Diego to Seattle, picking up donations from local partners and bringing them to local hospitals.

Along with donating gaming consoles, controllers, and software, the charity has also created the GameChanger Private Network to bring even more content to hospitals and their patients.

“We invented, patented and spent all these years building a private cloud, super-rich content delivery system that we give to the hospital so that everybody in the hospital can get 80 first-run movies, 700 games; they can get xCloud, they can get live-streaming shows we do every day, they can get videos to help them …”

“We have virtual reality on the technology that we invented so they can put on VR headsets and watch the movies, which is really great escapism, but also then, we have pain reduction software and group therapy sessions that they can do with the VR headsets on,” Jim said.

GameChanger is also working with pediatricians to use its technology “to help the children with their mental health and staying on their protocols for asthma treatment and diabetes treatment,” Jim said. “So, we use the gaming to get their interest, to stimulate them, but we also use it as a reward system.”

Reddit CEO Steve Huffman and Vice President of Partnerships at YouTube, Malik Ducard, were recently announced as GameChanger’s newest board members. Huffman and Ducard will be joining Tim Stuart, CFO of Microsoft Xbox, and Emmett Shear, co-founder and CEO of Twitch, among other high-profile tech and hospital executives on GameChanger’s board of directors.

GameChangers have been referred to as “tech avengers,” helping about 2,000 kids every single day.

“At the end of the day, what the charity is about is that we use the pain and suffering we went through to try to help rally people to support strangers none of us have ever met,” Jim said. “And we do that through the use of gifts that we give away, money that we use to support families that are really in a tough spot, and then because I’m an old technologist, we create, invent and donate technology to children across the country.”

Ninety-six cents on every dollar donated to the Dana Point nonprofit has gone to support the cause, Jim said.

“Anybody that wants to donate to GameChanger, we promise to be good stewards of that trust, and it will go at this really tough time to help families,” Jim said.