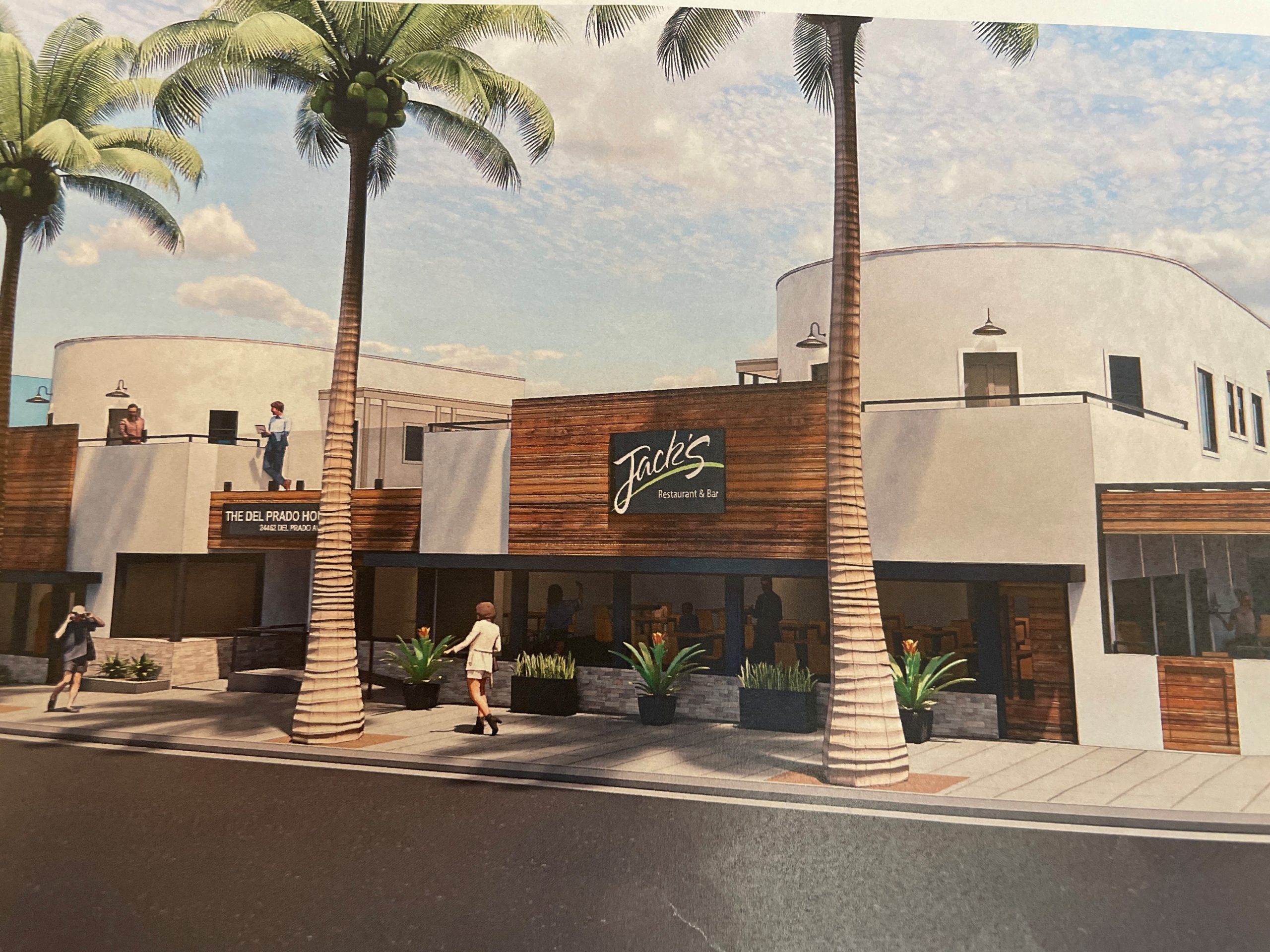 Hoping to keep the historic charm of the former Dana Point Hotel, father and son duo Marvin and Eric Winkler plan to renovate the site with new apartments and an outdoor courtyard.

“The current property was evaluated by Architectural Resources Group, which stated that the property has lost its historic significance because of substantial alterations and repairs for fire damage,” the Dana Point Historical Society wrote in that newsletter.

At a March 11 meeting, the Dana Point Planning Commission unanimously approved initial permits for a mixed-use development with 68 residential units, over 10,000 square feet of commercial space and subterranean parking.

However, when the Winklers took over the project from the Pacific Planning Group, they decided to largely keep the facade of the 75-year-old building the same.

The Winklers had the option to tear down the building to construct around 70 apartment units, President of Development Eric Winkler explained, but he and his father “loved the history, architecture, authenticity and character of the building.”

“I looked at this building with all the right things wrong with it, great location, Jack being there 25 years and having a loyal clientele and just seeing the architecture, the authenticity of the building, and the characters was what really got us to – it would be a shame to kind of knock it down in a sense,” Eric Winkler said.

The Winklers decided instead to “make it newer but keep the uniqueness of the building,” Eric Winkler said.

Instead of the 70-unit complex, the Winklers will be building a total of 23 apartment units, with 17 one-bedroom and six two-bedroom apartments.

“We are building it as a full vertical living building, which we will hopefully be able to become a bed and breakfast experience,” Eric Winkler said. “With a beautiful courtyard to have your coffee and food while socializing with the locals getting ready for your busy day of whale watching, surfing, music festivals, the Dana Point experience making it the destination it is.”

“As a Lantern Village resident, I am excited that Marvin and Eric are maintaining the character and history of the building, and leveraging the unique qualities of the existing structure,” Frost said in an email.

The space will also be home to an interior design store HŌM and will continue to house Jack’s Restaurant.

Jack Loconsolo opened Jack’s Restaurant at the site of the former Dana Point Hotel in 1997 and celebrated its 25th anniversary this year. Eric Winkler added that Loconsolo will continue to stay at the site following renovations.

“Keeping Jack’s restaurant shows a commitment to the community, and I think is a big win,” Frost said. “Improving the residential units above while changing the façade over on the Gym building (but keeping the structure) helps bridge the gap from ‘old’ to ‘new’ on Del Prado.”

Adding to the sentiment, Eric Winkler hoped that “by keeping (the building) a part of the past but building it into the future is something that helps us keep our grass roots in Dana and gives us that local, that love that we have for the city,” Eric Winkler said.

“We’re excited to help bring this heartbeat to Del Prado,” Eric Winkler continued. “I feel like the location is key and it’s something special, it’s special to us.”