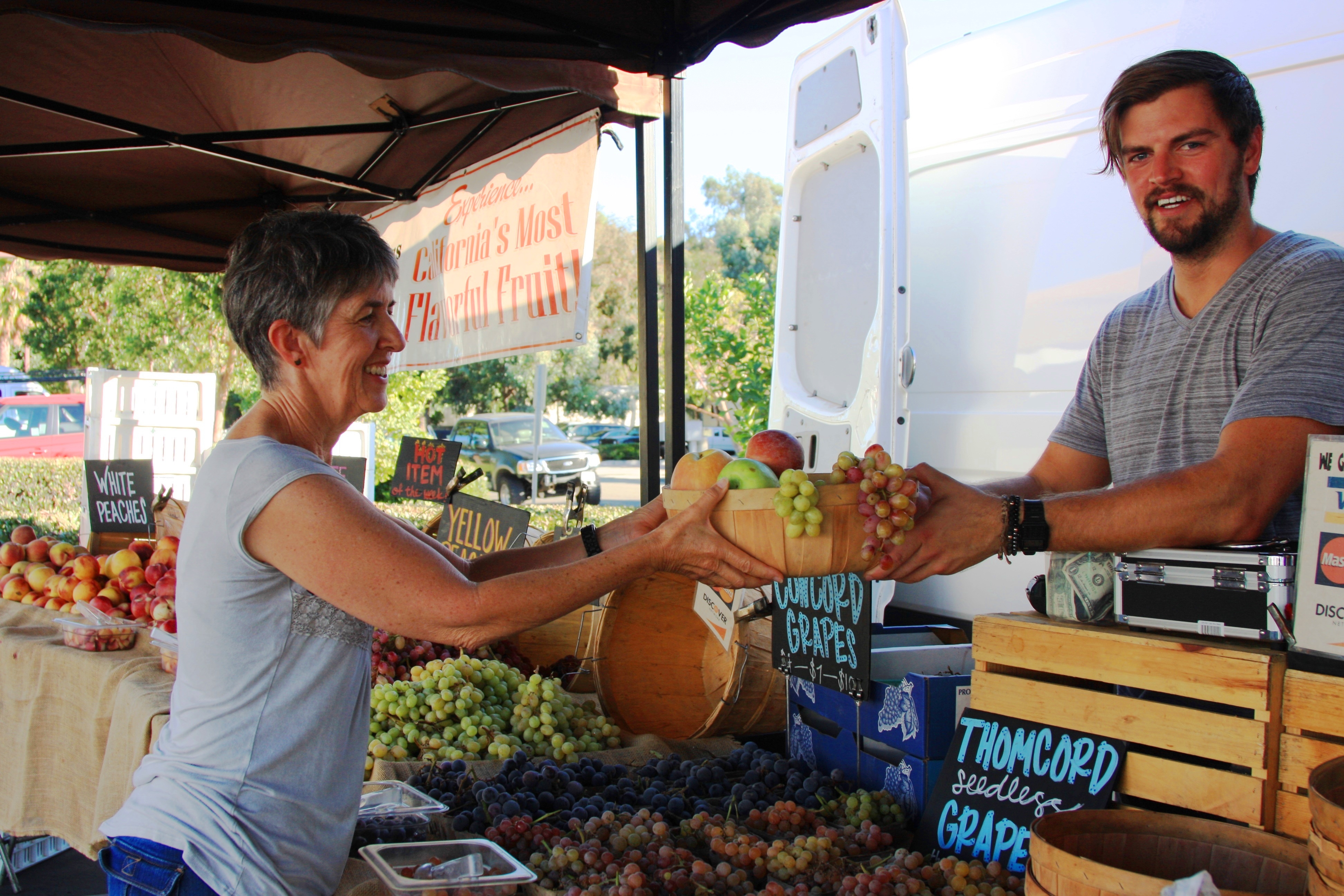 A kaleidoscope of colors, farm fresh produce, crafts and flowers have long made shopping at local farmers markets a popular pursuit.

Adding to the allure is the smiling and friendly greeting shoppers receive when interacting with the vendors. Not to mention, the sense of community it brings when people gather to peruse, purchase and socialize among the outdoor booths.

In Dana Point, residents recently became the lucky recipients of an added weekday opportunity to stock up and meet their neighbors at the city’s second farmers market.

Eight years ago, the city reached out to Steve Crossen who, at the time, was running markets in the Coto de Caza/Dove Canyon area and asked if he’d be interested in bringing a farmers market to Dana Point.

Crossen obliged and has been running the successful La Plaza Park-located Dana Point Certified Farmers Market every Saturday ever since.

In response to Capistrano Beach/Doheny Village residents’ and business owners’ expression of a need for more activities in the area, the city once again approached Crossen, this time asking for a weekday market in that neighborhood.

Members of the community have long been awaiting a revitalization project in the works in what has historically been regarded as an “underserved” and sometimes even “seedy” section of town.

Dana Point’s second market opened on Wednesday, July 2 in the parking lot of Capo Beach Church, in the heart of the Doheny Village business district.

“Every week, to make sure we don’t have any unsavory elements, the city of Dana point has been making an effort to provide a nice police presence,” Crossen said. “It does seem to be having a revitalizing effect on the area.”

The Saturday market hosts an average of about 20 vendors and on the first Saturday of the month, when the craft fair is added, an additional 25 to 35 artisans/crafters display their wares.

“Initially it took some time to get the Saturday market going but we finally have the right mix of vendors and since has been doing really well, ” Crossen said. “I’m sure it will be the same for the Capo Beach location. Like any new market it will take some time to build it.”

So far the Capo Beach market is up to about 15 steady vendors, with new booths being added regularly, and includes craft booths every week.

Bryson Raynsford of Sunny Cal Farms in Fresno County is one such vendor. His booth, spanning the length of five to six easy-up tents and full of a rainbow of colorful and fragrant produce, is a popular stop at the new market.

“Everything we sell is about 72 hours fresh off the tree,” Raynsford said. “It’s grown by us, brought down by us and doesn’t go to any packing houses or plants. None of it’s washed, waxed or enameled. You can taste the flavor—tree-ripened stuff.”

Raynsford added that as a vendor he enjoys the farmers market experience, much as visitors do.

“It brings us closer to the public,” he said. “You get to interact with customers. Folks who come to farmers markets are a nicer crowd, just really nice people.”

Pamela Micalizzi, a Capo Beach resident and regular at the Wednesday market, said the farmers market has been a great addition to the neighborhood.

“The fruit here smells like real fruit,” she said. “You can’t beat the real fruit smell. I also like that this market includes crafts and produce. It’s like a two-fer.”

When choosing a manager for the market, Crossen was an obvious choice, according to city officials. With the success of his Saturday market and requirement that all vendors be certified—meaning that the state Department of Agriculture has inspected the farms to ensure the produce being sold is California grown—it was an easy call to make, according to Robert Sedita, the city’s community development management analyst.

“With our close proximity to the beach and a large population concerned with living a healthy lifestyle, bringing in another market was a good idea,” Sedita said. “It is a great addition to the neighborhood and a way to get the community involved.”

Feedback has been positive, the city is fully supportive of both markets and optimistic they will continue to grow, he added.

Crossen, a San Clemente resident and real estate broker, first became acquainted with the business while working for a farmers market bread vendor.

“I was selling bread at the markets and thought that with my 20-year background in retail management with Walmart and Kmart stores, I should find out what it would take to run my own,” he said.

He decided to go for it, and opened his first two in the Coto/Dove Canyon area. He continued to run them for about five years after opening at La Plaza before deciding to close them and concentrate on Dana Point.

Although overhead is relatively low, agricultural permits, health permits, liability insurance and advertising make start-up costs significant, a fact that makes starting out a bit of a gamble.

“We have a great group now that I hope will stick it out as the public becomes more aware of the market and our customer base increases,” Crossen said.

The business of farmers markets varies and Crossen feels confident the method in which he runs his has everything to do with attracting a good variety of vendors, which in turn, along with the certification, attracts a loyal customer base.

“Many markets in Los Angeles, for example, typically charge a booth fee and a percentage of sales,” Crossen said. “At the Capo Beach market, we charge only nine percent of sales from all vendors. We think it makes participation more attractive and that, in turn, is good for variety.”

The Saturday market also charges only nine percent, but the first Saturday of the month art fair vendors pay a flat $25 fee.

The Dana Point Farmers Market is held each Saturday at La Plaza Park, from 9 a.m. to 1 p.m. On the first Saturday of the month, the hours are extended to 3 p.m. to include a craft fair.