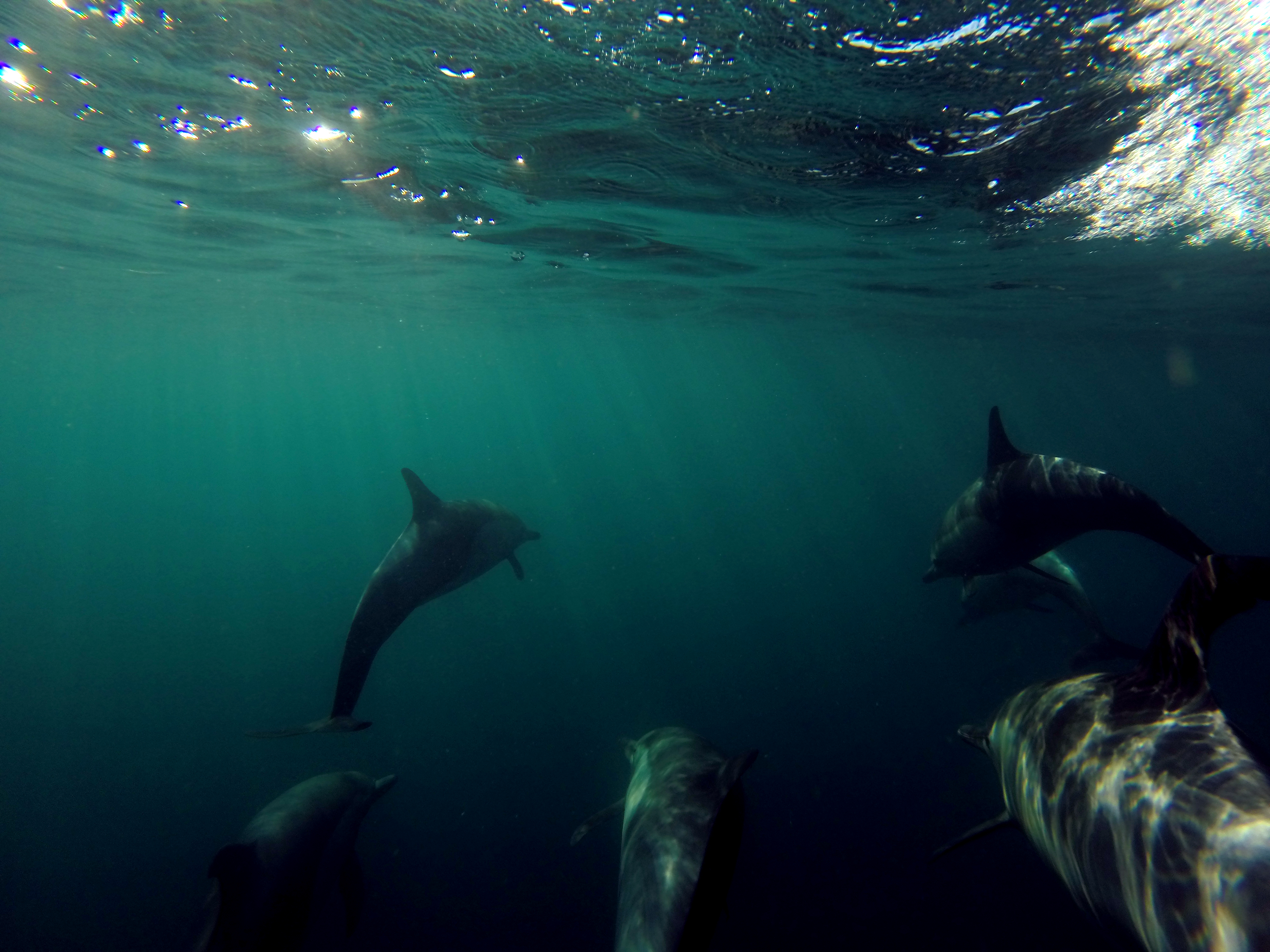 The swell buoy off the coast was measuring 7-foot-plus waves at 17-second intervals on the morning of Jan. 8; just a day after the first major El Niño storm of the season hit the Dana Point area. The weather and storm chop on the ocean had cleared but the residual swell had the water off the coast mimicking the ups and downs of a rollercoaster for the more than 170 high school students who set out aboard whale watching boats with their teachers and a handful of professional artists for their annual Festival of Whales pre-event field trip.

Since festival coordinator Penny Elia first approached Dana Hills High School digital photography and ceramics teacher Natalie Hribar-Kelly in 2011 with an idea for the creation of a logo design contest for art students and an invitation to display their artwork at the festival, a whale watching trip aimed at inspiring the school’s young artists has been a highly-anticipated yearly event.

The now five-year collaboration between the Festival of Whales and Dana Hills expanded this year with the addition of math, science, English and culinary students to the pre-festival fieldtrip once reserved only for the school’s photography, digital art, drawing and painting students.

Aboard two vessels, donated by Dana Wharf Whale Watching and Capt. Dave’s Dolphin & Whale Safari, the 171 students set out to search for whales, dolphins, other sea life while exploring the natural environment, not only to find inspiration for their artwork but also applying the experience to lessons in the other subjects.

Bringing STEM subjects—science, technology, English and math—together with art to form a “STEAM” linkup with the field trip was the perfect way to satisfy the growing interest among teachers and students, Hribar-Kelly said. Elia agreed, referring to the expansion as the perfect platform for the fulfillment of one of the event’s central missions: to involve and educate the entire community and to highlight the talent of the city’s next generation of leaders.

Students and teachers from the school’s sculptural ceramics, culinary arts, English, calculus and marine biology class were along for the ride this year, busy working on curriculum created by their teachers to tie the outing into their lessons.

While culinary students have been involved in the past two festivals, this year they were treated to a visit to the Wind & Sea kitchen afterward to visit with the restaurant’s chefs. The rest of the kids were treated to an Ocean Institute tour, following the boat trip, to discover more inspiring ocean- and wildlife-related subject matter.

The teens were armed with professional camera gear, paper, pens, pencils and their ever-present cell phones, enthusiastically documenting the experience, despite a few cases of seasickness brought on by the rolling waves.

Jake Schwartzberg, calculus teacher and chairman of the school’s mathematics department, said he brought 20 of his senior calculus students on the trip to collect data via their cellphones’ compass feature, to be taken back to the classroom for a lesson in vector analysis and using the tool of the law of cosines to determine distance, rates and times, as well as learning how GPS global positioning systems work.

“They do distances all the time in mathematics, with right triangles using the Pythagorean theorem, but he law of cosines allows us to do distances in oblique or non-right triangles, opening the door to a whole different branch of mathematics,” Schwartzberg said. “Now, vector analysis and the law of cosines don’t really turn them on, but still, I think this is one of the ways that we’re supposed to be showing them how math is really used.”

Schwartzberg related his lessons to how math is used in global positioning systems, triangulation, how signals bounce off cell towers and teaching the kids how their cell phones really work, he said.

“I can’t imagine not doing this again next year ,” Schwartzberg said, adding that he found it, “a worthwhile, valid trip where they get to get outside and enjoy whale watching, collect a little data along the way and use that data in a meaningful way back in the classroom.”

Drawing and painting teacher Chau Tran, or “Sensei” as his students call him, has been bringing students on the trip since the beginning of the program and said he still enjoys seeing not only their reactions to what they see on the journey and the way they use their inspiration in the paintings and prints they make for show and sale at the festival, but also how the experience opens their eyes to career possibilities they may have never considered.

“The students absolutely love it,” Tran said. “For some kids, it’s the only time they get to actually go on the water. The trip provides them a memorable opportunity that they’ll carry with them the rest of their lives. I like to see their eyes open to new opportunities to learn. Maybe they’ll do a major in conservation or marine biology or something else. Maybe they’ll become interested in sailing or water sports.”

Randy Hudson, the school’s marine ecology teacher brought 16 students, eager to provide them with a close-up view of the marine mammals his classes were in the process of studying in the classroom. The students brought with them a good background knowledge of the dolphins and whales spotted during the outing and were looking to weave in what they’d already learned with observations of currents, waves and tides—physical factors of the ocean—and how those, along with pollution, effect the biological ocean inhabitants.

“We used currents to kind of understand the current situation of plastic pollution in the ocean and how … single-use plastic items … make their way out to the ocean,” Hudson said. “We don’t see it because it gets kind of entrained in these larger-scale currents offshore … We think it goes away but we’re learning about how it all ultimately comes back to us. We’re learning about how we are finding whales with plastic in their gut and chemical effects in their blood.”

Hudson said the science department would also embrace the addition of art to the study of science by using the day’s inspiration to create a sculpture out of common household plastic items for display at the festival, to illustrate the problem discarded plastics creates for marine life.

Not long after leaving the Harbor, passengers of both boats caught sight of a large and pod of common dolphin, cetaceans of the toothed whale variety.

Photography student Shaun Phaneuf sprang into action, deploying two GoPro cameras attached to an 8-foot pole, in an effort to capture underwater footage of the playful marine mammals. His efforts were immediately met with success as the pod stayed near the boat for nearly an hour.

“I got 1,800 photos and about 30 minutes of underwater footage,” Phaneuf said. “We’re going to put together a video and submit it to a contest. It’s going to look great.”

Shortly thereafter, the boats caught sight of a migrating California gray whale and moved in for a closer look. The giant whale seemed to oblige the audience making a few dives and showing its tail fluke before continuing its journey to warm Baja waters.

Camden Butterworth, the student whose artwork was chosen as the official logo for the upcoming 45th annual festival, was among the excited group snapping away in search of the perfect shot.

“I’m excited to be on this trip again taking pictures and gathering inspiration for artwork for the show,” she said. “I had a couple of pieces in the show last year and I even sold a few. I’m hoping to do that again this year.”

Photography student Bradley Burke said he appreciated the chance to get a glimpse of wildlife photography as a career.

“This is a great experience for high school students, capturing the beauty the ocean has,” he said. “It helps kids get a better feel of what a career in photography might be like and I think it is just a wonderful time to interact, get inspired and just take it all in.”

“They are gearing up for a slam poetry competition in April at the Orange County School of the Arts, our third year in the competition,” Coghill said, adding that the students would be writing poems about the grey whale migration, their sense of the environment and the imagery and the feelings they were experiencing on the trip. “They’re also going to perform spoken word poetry at the festival.”

Carlisle Huntington, the student who founded the now 20-member Poetry Club, said they placed second in last year’s slam poetry competition and she and her peers were looking to the day’s adventure as a catalyst for the creativity needed to win at this year’s contest.

“I feel like being raised by the beach, you kind of take for granted how amazing the ocean actually is,” Huntington said. “I can’t believe there are some people who live their entire lives and never see stuff like this or experience how humbling it is.”

She went on to express her wish that the inclusion of high school scholars on the trip continues as a longstanding tradition, for its intrinsic value in sparking creativity and wonder.

“The ocean is the source of all life on Earth, basically, so it’s a great place to draw inspiration,” Huntington said. “Your mind just kind of goes blank and you can just actually think and observe. It’s interesting because from the primordial ooze from which we came, now we’re on top of the ocean; we’re soaring. Look how far we’ve come! Twenty percent of the ocean is still unexplored, so there’s still the possibility of mermaids and megalodons, which I’m really excited about.”

Speaking more specifically on how she intends to apply her experience in preparing for the upcoming slam poetry competition, Huntington summed it all up by saying, “Direct experience is always so much more valuable I think than what you think you know.”

The 2016 Festival of Whales is set for March 5, 6, 12 and 13 at the Dana Point Harbor. For more information, visit www.festivalofwhales.com.

STUDENT SHOTS
As part of our annual coverage of the Festival of Whales field trip, photography students submit their best shots for consideration of publication in the print and online editions of the Dana Point Times.
Here is a small selection from some of the best shots from Dana Hills High School students (in addition to Shaun Phaneuf’s underwater shot above).