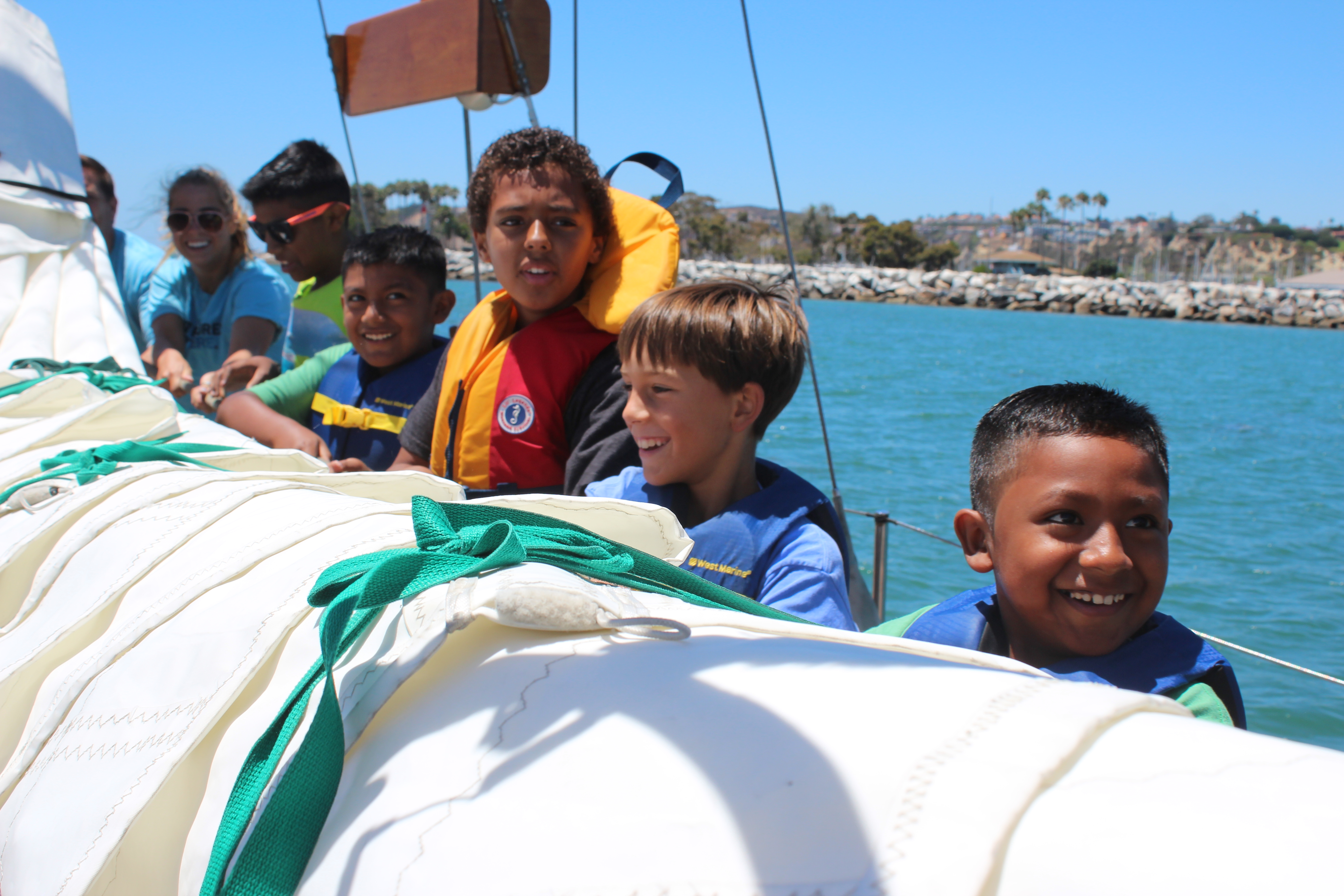 Those are a few points Edward Taub wants young students to take away from their journey.

With names logged onto the Schooner Curlew’s manifest, a mix of print and cursive showing their age, seven young members of the Boys & Girls Club of the South Coast Area, located in San Clemetne, strapped into life jackets and anxiously awaited direction from their captain.

They sat atop forest green cushions and clung to cable railings as the historic sailing vessel inched its way out the Dana Point Harbor into open waters off Doheny State Beach. Sightings of sea lions and stand-up paddleboarders evoked the same excitement as these young sailors headed to sea, many for the first time.

“I’ve got a bad feeling about this,” said 8-year-old Oscar Vasquez. “What happens if we see sharks?”

With reassurance from a club mentor that sharks don’t like the taste of humans, Oscar was ready.

It is little life lessons like that, about overcoming fear or working as a team and caring for one’s health that Taub, a longtime Orange County pediatrician, hopes these kids remember.

“About 80 percent of the problems I was seeing with kids were from stress.”–Edward Taub.

Taub has practiced medicine for 50 years. A young man, 25 years old and fresh out of medical school in New York, Taub began an internship at an Orange County hospital. He saw the sunshine and never left. Five decades, eight books and thousands of patients later, Taub is no longer practicing but he’s still reaching out to children and families, helping to ensure they lead healthy and happy lifestyles.

After Taub started his medical practice he quickly discovered a trend. His young patients were stressed.

“About 80 percent of the problems I was seeing with kids were from stress,” Taub said. So he worked out a program to teach kids about healthy eating, exercise and stress management. “Eighty percent of my 80 percent of stressed patients got better. That was the beginning of the wellness movement.”

It was the 1970s and Taub took his charts and findings to Dr. Jonas Salk, the American medicine and virology researcher behind the polio virus vaccination. As Taub recalls, Salk looked over the results and said, “Dr. Taub, you are going to create a wellness vaccination.”

“Did you come prepared for your wellness vaccination,” Taub asked the club members, ranging from eight- to 12-years-old, wearing shock on their faces as they looked at one other and their leaders, their eyes telling the whole story and asking, “We are getting shots today?”

It’s not a literal vaccination though. The news no shots will be handed out came with a collective sigh of relief and lots of laughs. This vaccination involves no needles. It’s purely verbal, filled with tips and tricks to achieving a healthy lifestyle, not inactive viruses.

Last summer, Taub shared an outreach idea. He wanted to take kids out onto the open sea for an afternoon of sailing with a dose of wellness mixed in. Taub, a former lieutenant commander in the U.S. Coast Guard and ship doctor for Windstar, Holland America and Carnival Cruise Lines, joined the Schooner Curlew’s crew 10 years ago, coming aboard as the ship’s doctor. Why not utilize the ship he thought.

Taub received a phone call soon thereafter from billionaire philanthropist John Tu, the founder of Kingston Technology, the world’s largest manufacturer of memory products, according to Forbes magazine. Tu liked the idea and asked how he could help. He provided a grant.

With funding in hand, Taub, along with son Marc, the emergency room director at Saddleback Memorial in San Clemente, reached out to Curlew owner Bob Harrison and the Boys & Girls Club of San Clemente. Voyage to Wellness was born.

One year and more than a dozen trips later, numerous club members have been given the opportunity to hit the open sea where they work together to raise massive sails, get splashed by ocean water as the ship cuts through waves and, most importantly, where they learn lessons they can carry throughout their lives.

“If kids are at the mercy of their parent’s refrigerator … they might not make the right choices. But hopefully this trip, combined with what we teach at the club and what they learn at school it’ll click.”–Andy Broshe

“What’s this,” Taub asked holding a bright, red bell pepper in his hand.

“A pepper,” the kids yelled out in unison.

“And where does this pepper get its energy from,” he asked.

There was a short silence before one child raised his hand, “The sun,” he hesitantly said.

Then he held up a carrot, a head of lettuce, an avocado and various colorful fruits and vegetables. Each time the young students and Taub repeating the question and answer volley. Then he held up a bag of M&M’s. They were stumped. He asked them if the candy was healthy, they replied with a collective, “No.”

“A lot of low-income, at-risk youth battle obesity because a lot of parents just don’t have the means or education to buy the right things to cook,” said Andy Brosche, director of operations at the club.

“If kids are at the mercy of their parent’s refrigerator … they might not make the right choices. But hopefully this trip, combined with what we teach at the club and what they learn at school it’ll click.”

Each voyage, Taub and Curlew crew members highlight nutritional ways to live healthy, like eating fruits and vegetables, drinking water over soda, getting adequate rest, exercising daily, meditating and showing respect and kindness to parents, teachers, others and themselves. Then, to top it all off with one of Taub’s most important rules to living a healthy and happy life, they have a little fun.

Stacked from shortest to tallest the seven club members and three club staffers onboard grabbed hold of a rope and awaited the captain’s OK. With a thumb up, the group yelled out “hoe,” as crew member Roger Hudson screamed “heave.”

Inch by inch the Schooner Curlew’s sail raised and they set out on their journey to wellness.