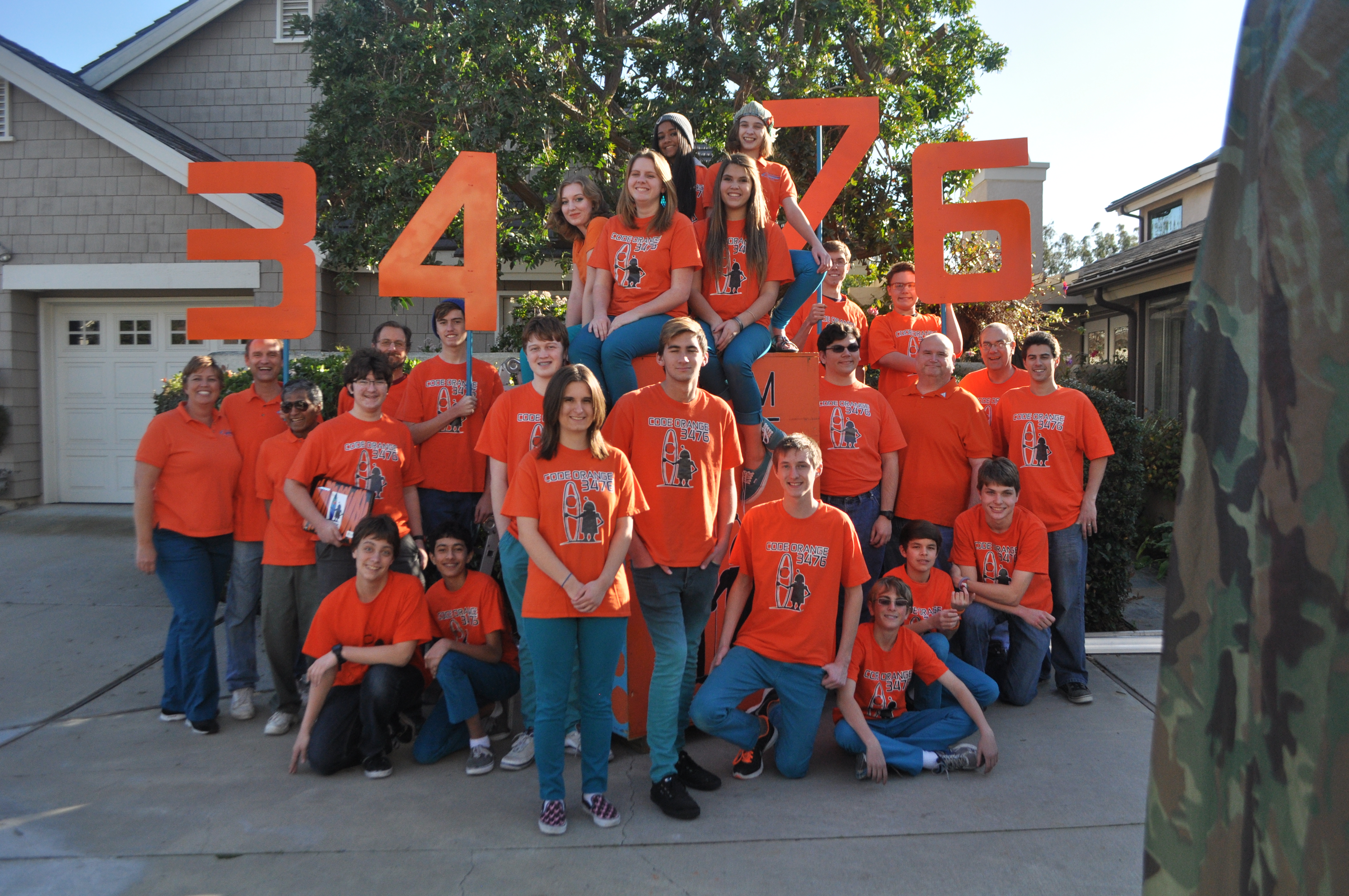 The south Orange County-based “garage” robotics team, Code Orange 3476, has worked nearly every night for two months, in preparation of this season’s opening challenge, a FIRST—For Inspiration and Recognition of Science and Technology—regional competition in San Diego.

Nicknamed “the varsity Sport for the Mind,” FIRST Robotics Competitions test young contenders’ ability to execute a design, utilize advanced software, create a brand and, among other things, work within alliances to achieve a common goal.

“It’s a very high-quality program that takes it way beyond nuts and bolts,” Nordman said. “It’s building future problem solvers, who are going to solve issues that my generation hasn’t been able to, and it is really gratifying to help them down this path.”

New Hampshire-based nonprofit, FIRST, was founded in 1989 by entrepreneur and inventor Dean Kamen to inspire youth participation in science and technology.

According to the organization FIRST will reach more than 300,000 students this year, through programs for young scholars from kindergarten up to 12th grade—with the help of an estimated 120,000 volunteers and some 3,000 sponsors.

Facing strict time and resource limitations, thousands of teams worldwide raced against a six-week deadline to develop, design and test original robots to compete in more than 58 regional tournaments throughout the United States, Canada and Israel—with St. Louis, Mo., and the FIRST Championship in their sights.

Comprised of 22 students from varying school settings, Code Orange is one of a kind.

While most teams are school or club founded, this small but dynamic community–based group of young engineers is made up of five home-schooled students and representatives from 11 Orange County high schools.

Founded three years ago, Code Orange is based on service-oriented values and aims at supporting young-Christians in engineering, something team-mom and mentor, Nordman said makes them unique.

“There is so much pressure to lose your faith in the science field,” she said. “We want to help students realize they can be Christians as well as scientists.”

From holding summer camps for special needs students to hosting and judging a FIRST LEGO League competition in the fall, the group’s student-led efforts reach far beyond competitions, and include community outreach activities aimed at promoting engineering amongst elementary-aged students.

“These kids could have held summer jobs or could have been lying around playing video games, but they are very service oriented and it’s inspiring to see their enthusiasm and joy in helping others,” Nordman said.

On this night, dinner was the first order of business, but members of the building, design, electronics, programming and outreach teams quickly turned their attention to their prototype, to test features before competitions began.

This year teams internationally were challenged to create robots for the game, aptly-titled, “Ultimate Ascent.” Under stringent guidelines, teams constructed innovative machines that were agile, able to fling Frisbees and climb jungle-gym like steel pyramids.

Games last for just two minutes and 15 seconds inside a 54-foot by 27-foot court.

During this time, driver controlled robots attempt to fling Frisbees into goals and play a little defense against others trying to do that same, with the opportunity to earn extra points for ascending one of two towers placed at the center of the arena.

Partners in one game become opponents in the next, as two, 3-on-3 alliances compete against each other to promote “coopertition” amongst contenders. Whether in partnership or opposition, this cooperative competition, allows teams to get to know one another and the robots to develop working relationships.

“It’s really competitive this year and we have to do our best,” said team veteran, Cailin Helmick, on the regional competitions. “We’ll make adjustments and see what needs to improve even more, and hopefully do well in our second tournament.”

With the help of five engineering mentors—both electrical and mechanical engineers—and four non-engineering advisors, Code Orange prepared for the season by attending classes and workshops to get up to speed on utilizing machines and software.

Team sponsor Applied Medical, a Rancho Santa Margarita-based company, not only provided practice space and generous monetary donations, but three engineers from the company act as mentors to the students.

Throughout the year mentors focused on addressing individual interests and placed students on sub-teams to spark their curiosities and encourage collaboration.

But with five teammates graduating in May, Code Orange veterans—or aces—took it upon themselves to take younger members—groms—under their care to pass on knowledge for a fluid transition into next season, said Helmick.

Last weekend, at the San Diego regional at the Valley View Casino Arena, the competition felt like a pro-sporting event.

Colored bodysuit-wearing teammates danced their way down the aisles as sign-carrying students led chants before crowd cheers took over as robots went head-to-head.

The team made it successfully through two days of competition to advance into the elimination rounds. Although defeated in the semifinals, Code Orange was honored with the Industrial Design Award that celebrates the form and function of an efficiently designed robot.

The season doesn’t end here. Code Orange will compete in the Inland Empire tournament from March 28-30 in San Bernardino. For more information on FIRST, visit www.usfirst.com and to learn more about Code Orange, visit www.teamcodeorange.com.