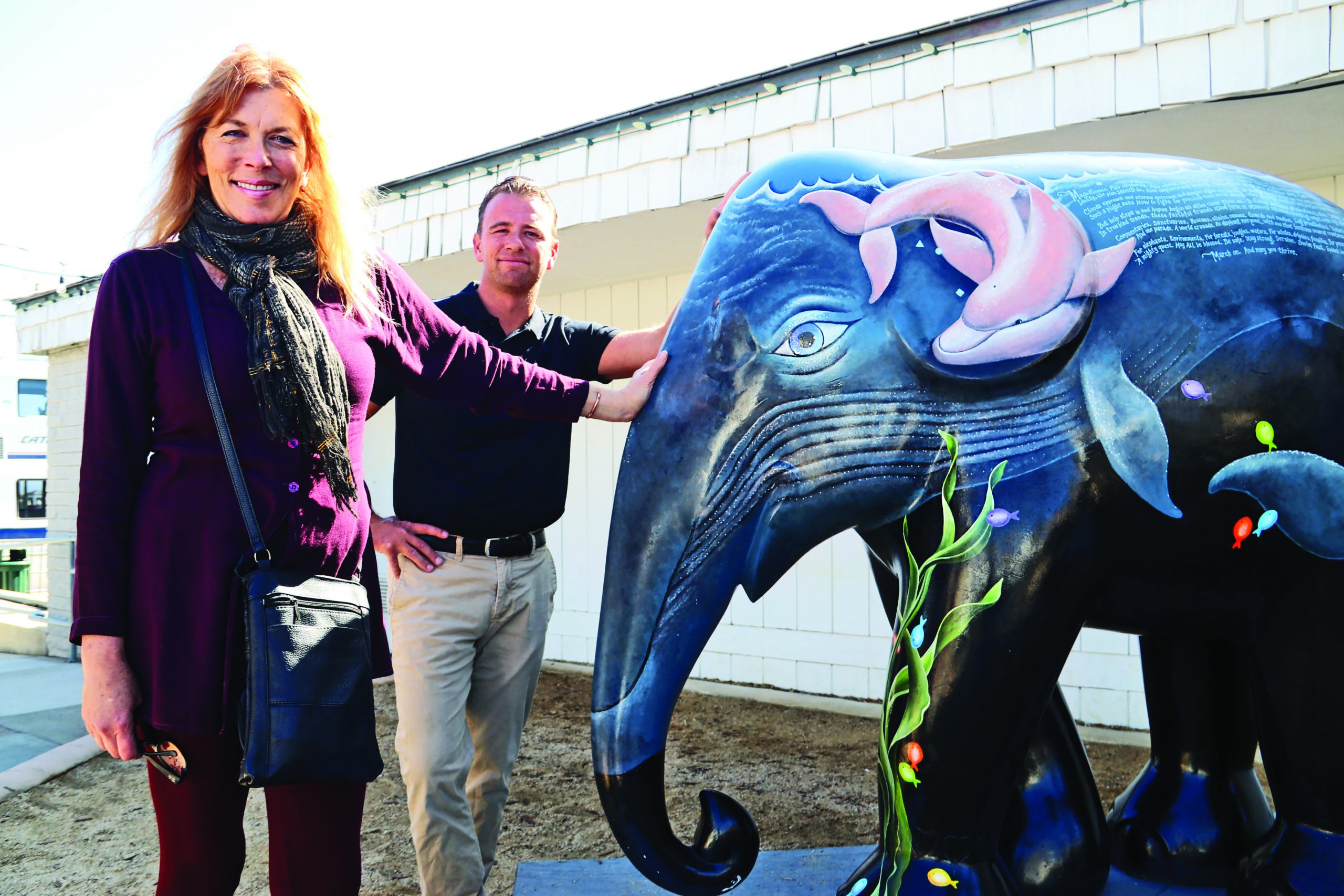 Dana Point is now hosting a herd of elephants—a herd of painted elephant sculptures for the return of the Elephant Parade.

The Elephant Parade, a Netherlands-based social enterprise exhibition company, has once again chosen Dana Point for the launch of its efforts to bring attention to saving the Asian elephant from extinction and supporting elephant welfare and environmental concerns worldwide.

The Elephant Parade company and programme was founded more than 15 years ago after a baby elephant named Mosha had stepped on a land mine. Thanks to veterinary care over several years—partly funded by the efforts of Elephant Parade—Mosha was provided with a prosthetic leg. She is now 15 years old.

“Elephant Parade public exhibitions on streets throughout the world bring attention to the plight of the Asian elephant, which is 95% extinct due to loss of habitat and human encroachment,” said Dana Yarger, owner of Dana Bay Gallery.

This is the second exhibition presented by Elephant Parade in Dana Point, one of only five cities in the world that have hosted the exhibition more than once. Its 2013 version—which Yarger helped in organizing—attracted international attention and reported more than 250,000 visits for the two-month exhibition. Exhibitions of the sort have appeared in more than 40 cities in 20 countries, including Hong Kong, Taiwan, three cities in mainland China, three cities in Brazil, the United Kingdom, Spain, France, Singapore and Dubai, among others.

“There was a lot of goodwill at that time,” Yarger previously said of the 2013 exhibition in Dana Point. “I believe there’s a desire for that goodwill now.”

Earlier this year, Yarger spearheaded “Encore for the Elephants”—a public initiative that encouraged people to share experiences, memories and photos of their visits with the Elephant Parade or elephant statues.

Yarger says he is sometimes stopped by strangers who will ask him about the elephants or share their own photos and experiences with him.

“With art on the street, and particularly with the elephants, people ask questions like ‘What is that? Why is that here?’ ” said Yarger. “Of course, there’s a subjective measurement of what art is, and each of the artists had a metaphorical reason for the compositional content of the art. But it gets people to ask questions, start conversations and connect.”

Over the next several weeks, 25 unique elephant creations migrated into positions in the city, concentrated in Dana Point’s historical Lantern District, with others also installed in Doheny Village, Capistrano Beach, Waterman’s Park and Dana Point Harbor.

Councilmember Mike Frost, whose district represents Yarger’s place of business and residency, has helped further the initiative for the Elephant Parade. He says it is important as a city official to assess community support and potentially develop production of public art events each year.

“While I personally believe this type of event complements what we already do very well, the question is if we can build an organization of volunteers and sponsors who feel the same,” Frost said.

Frost says he witnessed firsthand how the elephants inspired joy among both children and adults, as well as both residents and tourists.

“It is important to support art and culture within the community,” Frost said. “For this project specifically, we intend to recapture the excitement of the original event and lead effort to attract appropriate walk-about outdoor tourism back to Dana Point.”

While several city leaders were instrumental in the effort, including City Manager Mike Killebrew and Mayor Jamey Federico, Frost notes that the return of the Elephant Parade was not a city-funded event. Multiple volunteers, as well as key sponsors within the community, facilitated this eight-week event, Frost added.

Through her elephant sculpture, Seeley tied in the region’s relationship to marine life.

Seeley transformed a 6-foot-tall, fiberglass elephant statue into an amalgamation of two of the world’s largest land and sea mammals—the Asian elephant and the blue whale. The eyes of the two creatures sit side-by-side, as Seeley wrapped the elephant’s frame with a portrait of a whale.

The sculpture also features a painted poem Seeley wrote about the plight the two species share: “Magnificence. Fair elephants. Fair whales. Each a prize. And some assume these babies bloom, grow up, grow old and wise. Ideally, the plan should be that elephants keep walking … that whales spray and dolphins play … but challenges come stalking.”

Seeley says the poem is one of her proudest works of art.

“This piece and its poem mark both these gentle giants, while encouraging us to see the point in empathetically respecting all animals and our environment,” Seeley said.

Earlier this year, “Sea the Point” was featured in a drive-in showing of the documentary Wild Daze in Los Angeles. The film highlighted the growing threats to natural life in Sub-Saharan Africa.

Altogether, the exhibition is expected to span eight weeks before the elephants wander on a national tour. Gallery Dana Bay will serve as the California Dreaming Elephant Parade host and headquarters.

“Find them all. Where the people are the parade!” Yarger said.