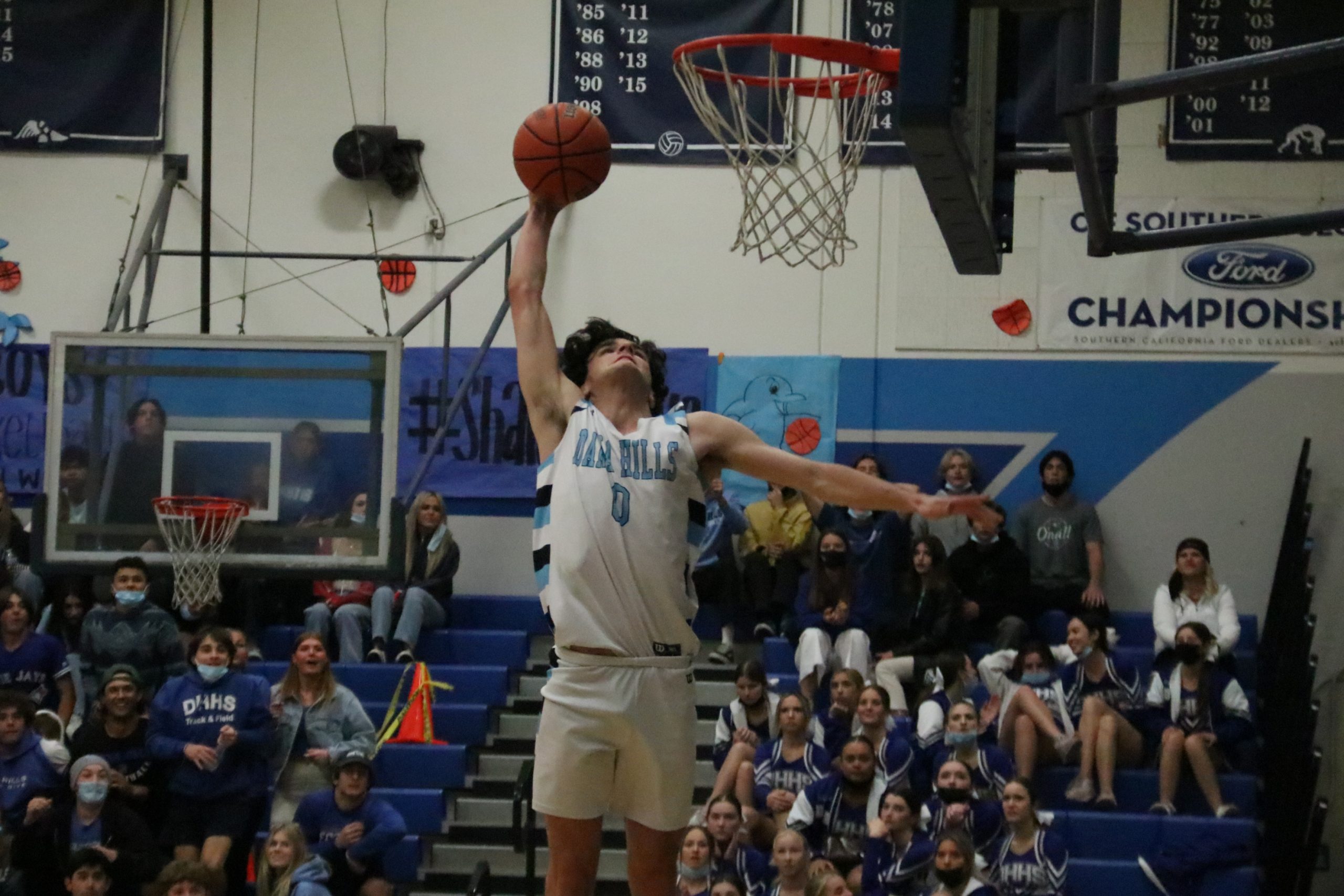 In the 49 years of Dana Hills High School’s existence and in the 19-year tenure of coach Tom Desiano, the Dana Hills boys basketball team has never reached these heights.

It took nine years just for the Dolphins to return to a CIF-SS semifinal, but the stage is now set. Dana Hills is one win away from fulfilling its hoops dreams.

Dana Hills led by 16 points at halftime and held off a charge from host Long Beach Millikan to win its CIF-SS Division 3A semifinal, 61-56, on Tuesday, Feb. 22, and advance to the Dolphins’ first CIF-SS final in program history.

Bishop Diego (22-7) beat St. Pius X-St. Matthias in its semifinal, 51-46. The Cardinals are playing for their first championship after losses in the 2020 Division 5AA and 2011 Division 6AA title games.

Senior guard Griffin Haugh once again led the Dolphins in the semifinals with 25 points, including six 3-pointers and a team-high 12 rebounds. The Haugh brothers made their own “Splash Brothers” impersonation on Tuesday, as Griffin’s brother, Collin Haugh, a freshman, hit three 3-pointers of his own.

Dana Hills was playing in its first CIF-SS semifinal since the 2013 Division 1A playoffs.

The Dolphins started out fast, with Griffin Haugh scoring 20 of his 25 points in the first half with five 3-pointers. Dana Hills led by as many as 18 points before settling into its 16-point halftime lead, 39-23.

Millikan made a determined charge in the third quarter to cut the lead to just three points and trailed by five points entering the fourth quarter, 44-40. Dana Hills got key 3-pointers from both Haugh brothers, and Pellini and Griffin Haugh knocked down free throws to seal the win.

The Division 3A playoffs have been a turnaround for Dana Hills.

The Dolphins struggled in a tough Sea View League to end the regular season with five consecutive losses to tie for third in the four-team league. However, Dana Hills’ nonleague success allowed it to hold on to the No. 3 seed in Division 3A.

In the quarterfinals on Friday, Feb. 18, Dana Hills had faced a true test against visiting Bishop Amat. Things started off as they have all playoffs for the Dolphins, with a fast start to build a 14-point lead in the second quarter. Bishop Amat was not deterred and stormed back to overtake Dana Hills and seize a five-point lead entering the fourth quarter.

But Dana Hills ultimately turned up the defensive pressure and held Bishop Amat scoreless for the final 2 minutes and 41 seconds of the game. Pellini hit two free throws and tipped in a rebound for the lead, and Griffin Haugh sank two more free throws to ice the game, 55-52.

Pellini led the Dolphins with 19 points in the quarterfinals.