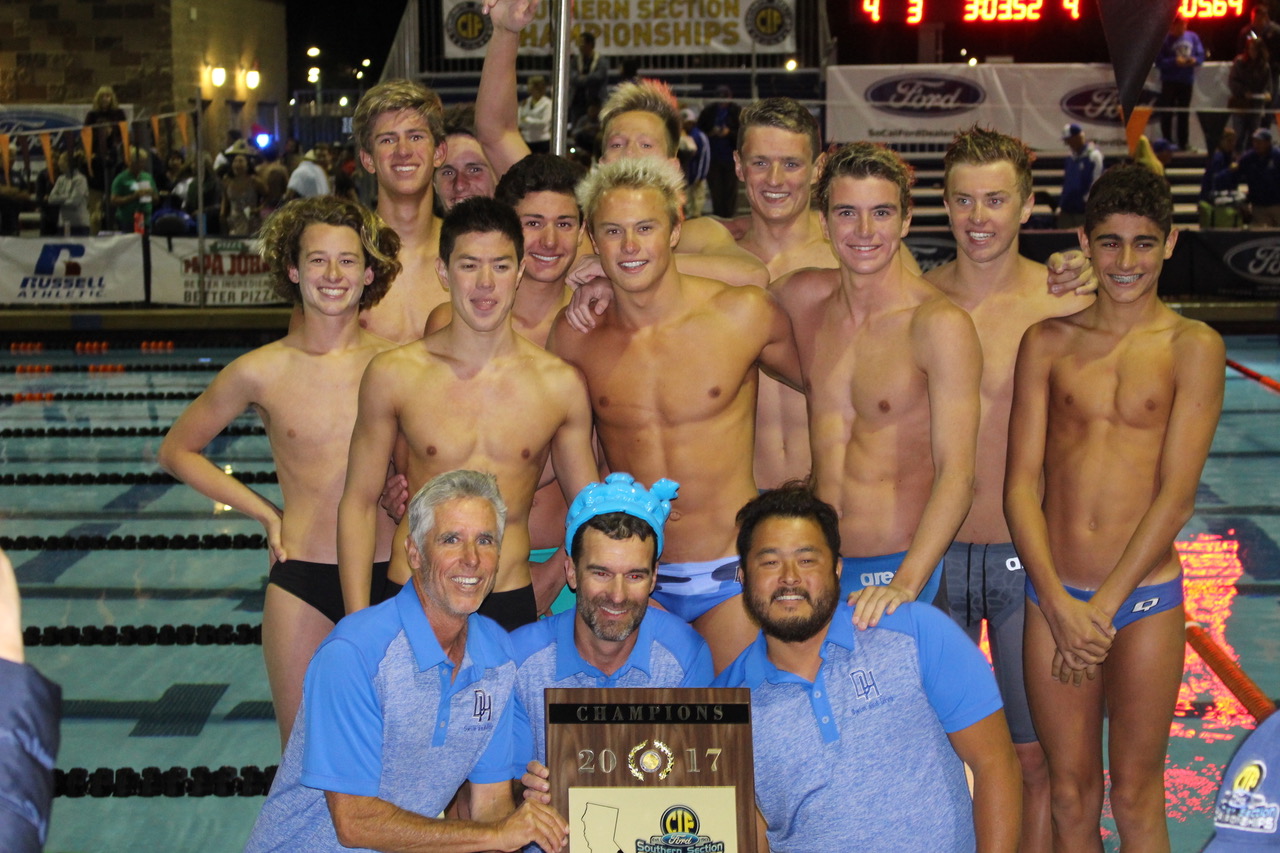 From the end of the opening race, the Dana Hills High School boys swimming and diving team was in control at the CIF-SS Division 1finals on May 13.

The Dolphins, who secured a meet-opening win in the 200-yard medley relay, leaned on their depth and top-level talent throughout the day to secure the Division 1 title at Riverside Community College. It was the first CIF-SS Championship in any aquatic sport for Dana Hills.

Thanks to a well-rounded effort, the Dolphins won the meet with a total score of 292.5 points. Loyola, the defending champion, finished second after scoring 282.

In CIF-SS competition, relay events count double, making them crucial to any team with title hopes. Thanks to their considerable depth the Dolphins were able to field teams in all three relay events, where they scored a whopping 114 total points.

“The fact that we had six guys at the top, elite level (in relays), that’s a huge boost for us that a lot of teams don’t have,” Dolphins coach Matt Rosa said.

The Dolphins’ diving team played a crucial role as well.

Dana Hills senior Jake Greenberg was crowned the Division 1 champion, and the team’s three divers brought home 45 points. The eventual second- and third-place finishers, Loyola and Northwood, did not field any divers.

Kao, a junior, pulled off a double-event win in the 200- and 500-yard freestyle races. Pellini, a senior, finished second in the 100-yard breaststroke and 200-yard individual medley.

The CIF-SS title was three years in the making for this Dolphins’ group. Rosa recounted how, as sophomores, the team’s core group of swimmers had their eyes set on winning a Division 1 Championship before they graduated.

They nearly accomplished the goal in 2015, but finished second. They came dangerously close again in 2016, but settled for another runner-up finish. Finally, on May 13, the Dolphins broke through and won the elusive title.

“All that championship experience was huge for us. We were building within this group, knowing we have the ability to step up and do well,” Rosa said. “This was a special group. Every meet they kept stepping up, swimming well and we were able to finish the season on a high note.”