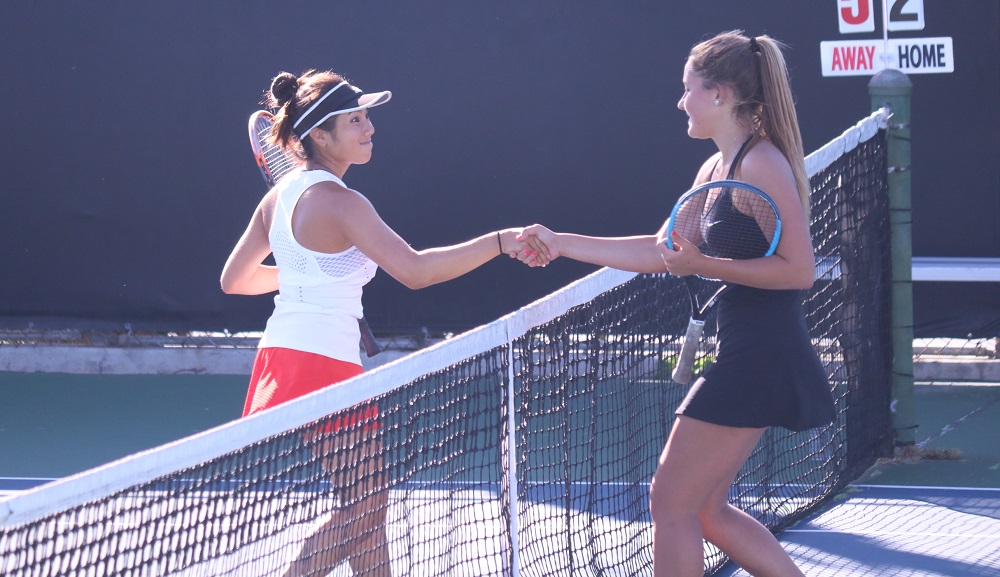 Here they are again.

For the fifth consecutive season, the Dana Hills and San Clemente girls tennis teams have formed one of the most even rivalries in any Orange County sport.

On Tuesday, the Dolphins fell to the Tritons, 11-7, at Dana Hills High School to split the season series for a fifth straight year, and if results from the first round of league play hold through the second round, Dana Hills and San Clemente will share a fifth consecutive South Coast League championship.

“We’ve been balanced,” San Clemente coach John Stephens said. “Last year, we had the stud singles players, so we’d win a lot of singles matches, and they’d always win the doubles. Still really the same. Their doubles aren’t quite as strong as they used to be, but it’s pretty even. We lost a lot of sets today where we were up, 5-4.”

“They did what they had to,” Stephens said of his singles. “Going into the match, if (Swift) is healthy, you expect her to win three, and that would make the whole match a different story. We’re just lucky in that sense.”

That meant the Tritons only needed one doubles win to clinch the victory, and they got it in the second round. The pairing of Cami Ding and Brooke Donovan pulled out a 7-5 victory to earn San Clemente’s 10th team point and win the match.

“It’s kind of been fun because they (Dana Hills) had their way with everybody in the South Coast League for 15 years,” Stephens said. “Last five years, San Clemente picked it up a little bit to the point where we’re competing with them. Pretty much every match is 10-8, 8-10. Today was 11-7, so it’s always close.”

The rivalry was amped up by a strong crowd at the Dana Hills tennis courts. Parents as well as players not participating in the matches were strong supporters with loud cheers for every point in some of the more closely contended matches.

While the Tritons and Dolphins are in line to split the league title again, Dana Hills isn’t out of the woods yet. The Dolphins will get one more tough match at Aliso Niguel on Oct. 18. Dana Hills won the first match by a tight margin, 10-8, but the injury to Swift won’t make any match easier.

Singles and doubles South Coast League Finals are on Oct. 23-24 at the Laguna Niguel Racquet Club.