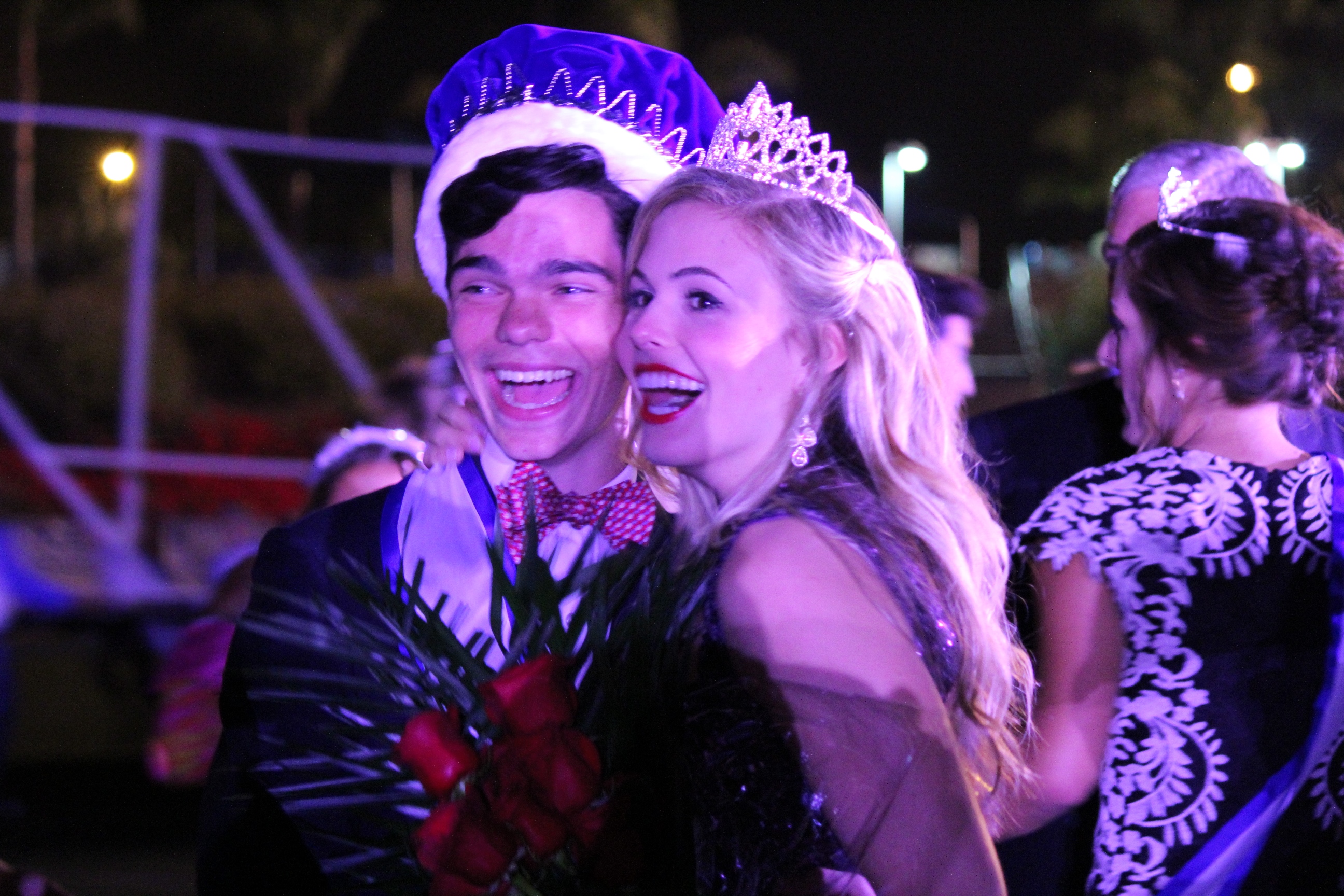 As the Dolphins and Wolverines stepped off the football field Friday night, hundreds of costume-clad Dana Hills students waited, seemingly patiently, on the surrounding track’s rings. Minutes of the second quarter ticked away slowly as excitement built on the sidelines, with no shortage of it on the field.

The stands erupted as junior Luke Williams intercepted an overthrown pass from Aliso Niguel’s quarterback Nick Chapman in the second and returned it for a 76-yard touchdown. The show was just beginning. With the padded players gone and the score standing at 31-7 in favor of the Dolphins, the stadium lights were cut and a mad dash to the 50 yard-line ensued.

An estimated one in three of the Dana Hills High School student body, of nearly 2,300 students, took part in the night’s homecoming celebration. It took nearly 800 participants to put on the student-run, choreographed and executed performance, paying homage to the last four decades of Dana history. From the lights to the script and the 20-foot backdrops to the synced dances and tunes, everything about the night was in the hands of Dana’s students.

Costumed figures like Michael Jackson, Britney Spears, Justin Bieber and John Lennon opened the stage frantically looking for this year’s homecoming court, and sent the audience on a ride into the past to find them.

Sporting backwards hats, the freshman class celebrated the not-too-far-gone 2000s with trends and songs they helped make popular. The baseball-tee wearing sophomores kicked it back to the decade they were born with hits from pop icons like the Spice Girls, N’SYNC and Britney.

No queens, kings, princesses or princes found in either decade.

It was on to the neon clad ’80s, as the juniors took center stage. But MJ, aliens and a little hair band tribute showed little sign of the missing royalty. The seniors were the royals’ last hope as the spotlight hit the cast of “That ’70s Show.” With a hundred of their polyester-clothed classmates waiting, Fez, Donna, Hyde, Jackie, Kelso and Michael struck a pose.

Disco came to life as the senior class performance threw it back to the decade Dana Hills came to be and saw its first graduating class. But still no sign of the royalty.

Enter longtime announcer, teacher and the voice of Dana Hills, Merritt Grimm. Dressed as Dr. Emmett Brown from the ’80s Back to the Future saga, Grimm rode into the show in the time-traveling DeLorean. Doc came to the rescue.

One-by-one and escorted by their mothers, fathers and mentors, the royal court made their way down the red carpet, followed by nearly 20 past queens. Student organizers wanted to stay true to the homecoming spirit this year by honoring the school’s alumni and showcasing the queens of yesteryear. Aubrey Rhodes would join the ranks, crowned with her king, and fellow senior, Spencer Martin.

A fireworks show topped the night’s performance, but not the evening’s celebration. The Dolphins went on to shut Aliso Niguel out in the second half, to put a 52-7 victory in the Dana Hills history books.