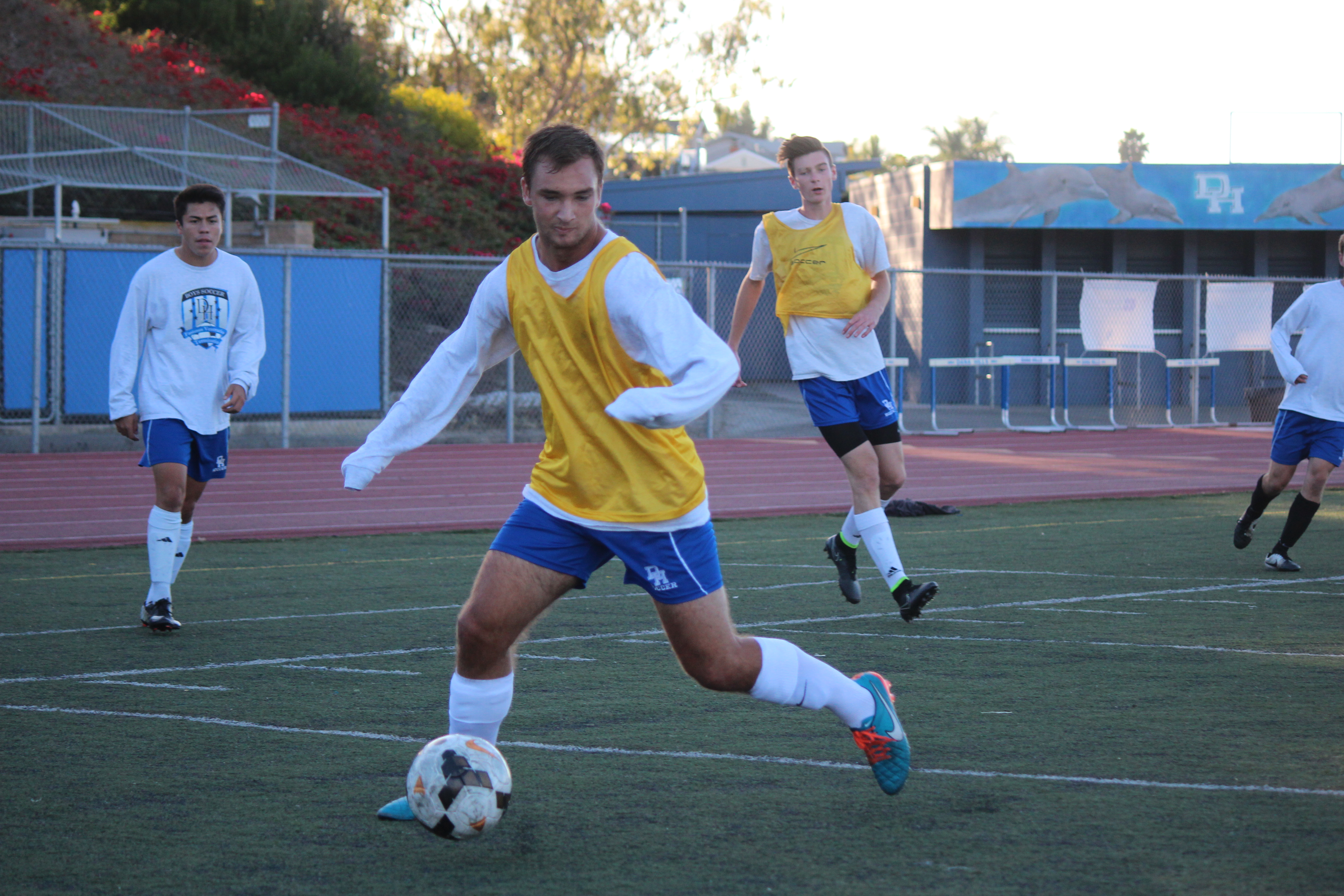 The starting 11for the Dana Hills boys soccer team that took the field at Thalassa Stadium Dec. 10 for a nonleague game against San Clemente is not what head coach Leo Compean had hoped for several weeks ago.

The Dolphins have been hit hard by injuries in recent weeks, forcing Compean to go to his bench early to give younger players valuable experience.

Dana Hills (0-3) held close in the first half against the Tritons, but San Clemente opened the flood gates in the second half, powering their way to a 4-1 victory over their regional rivals.

The Dolphins, who have lost three in a row, were without standout forward Paul Romero, Cameron Kaemerle and Spencer Madden. All three players were pegged to be useful contributors to this Dolphins team. Dana Hills began the season with 20 players but due to the host of injuries, there are only 12 currently available to suit up.

“We’re scrambling right now. We are down to bare bones … The silver lining is that we now know what we have. We know our depth chart and what we have to work on. When our starters do come back and work their way back into our system, it’s only going to make us stronger,” Compean said. “As bad as it feels to come off with a loss like that … there’s always a silver lining and that’s what we’re looking at, that future when we’re healthy again.

In the first half, the Tritons (3-1) held a good amount of possession, but struggled to break through the aggressive Dana Hills defensive line. The Tritons were called offside numerous times through the first 20 minutes, until senior Eddie Molina corralled a ball down the wing and whipped in a cross to forward Matias Ledesma, who buried the shot to give San Clemente a 1-0 lead 26 minutes in.

The Tritons nearly added another goal just before the half, but Dolphins goalie Humberto Loya made a diving save on a headed corner attempt to keep the one-goal deficit intact.

San Clemente came out more organized in their offensive third in the second half, which made it tough goings for Loya and the Dolphins defense.

Although the Tritons began to pour the shots on goal, Loya was up to the task. The sophomore faced a point-blank try in the opening minute of the second half and had to face a Ledesma penalty kick five minutes later. Ledesma converted to get his second goal on the night and give the Tritons a 2-0 lead.

Liam McVicar added another goal for San Clemente at the 55-mintue mark.

Dana Hills drew a penalty shot in the 73rd minute and senior Connor Murphy hit it home to get the Dolphins on the board, 3-1.

Up 4-1, the Tritons were awarded another penalty kick in stoppage but this time, Loya sniffed it out, making his eighth and final save of the night.

“(Loya) was our player of the game tonight. Last year, as a freshman, he got seven goals scored on him against (San Clemente) and they took it to us,” Compean said. “It was a confidence game for him … to make that (penalty kick) save was really good for his confidence.”

The South Coast League wrestling schedule is about as tough as it gets. Three teams in the five-member league are ranked inside the CIF-SS Coastal Division top-10 poll and on Dec. 9, the league showed its considerable depth.

It was the first time Dana Hills had defeated San Clemente since 2003.

Sammy Plumb pulled off the biggest win of the night for the Dolphins. Plumb needed a victory in his match to seal the win and he ended up pinning his opponent.

“We wrestled well as a team and our guys showed up … We were hungry to win,” Dana Hills head coach Reza Abedi said via email.

Up next for Dana Hills will be a trip to compete in the La Costa Canyon Tournament from Dec. 12-13.

With 26 seconds to go in a tie game with Dana Hills, Laguna Beach boys basketballs’ Charlie Rounaghi hit a 3-pointer to seal a 45-42 nonleague victory for the Breakers on Dec. 10.

The Breakers were able to dig into the Dolphins lead in the fourth quarter, outscoring the visitors 14-7 in the final minutes.

The loss was the Dolphins (1-4) fourth in a row, following a season opening win over St. Margaret’s in the Diablo Inferno Tournament. Dana Hills went 1-3 at the tournament, held at Mission Viejo High School, dropping games to El Modena, Esperanza and Temecula Valley, respectively.

The Dolphins will host former league rival Laguna Hills on Dec. 12 at 7 p.m., before competing in the Irvine World News Tournament next week.

The Dana Hills girls soccer team made their opening bid in the Aliso Cup Tournament a successful one Dec. 10 with a convincing 3-0 victory over Los Alamitos in the opening game of Pool G.

Sophie Gullickson, Elizabeth Durst and Olivia Sirianni scored for the Dolphins, while goalie Kristen Ahmann had six saves. Dana Hills improved to 1-0-1 on the season with the victory.

After dropping their first two games of the season, the Dana Hills girls basketball team has found success in recent weeks, going on a 3-1 run over their last four games.

The Dolphins defeated Laguna Beach as part of the Corona del Mar Tip-Off Tournament, then rattled off a 62-34 win over Santa Ana on Dec. 5, setting a season-high mark in points scored.

A loss to Northwood on Dec. 6 was followed by a 31-19 win over Saddleback on Dec. 9 in the Ocean View Tournament.

The Dolphins will host Irvine in a nonleague game on Dec. 16 at 7 p.m.

Dana Hills will compete in the Villa Park Tournament this weekend.