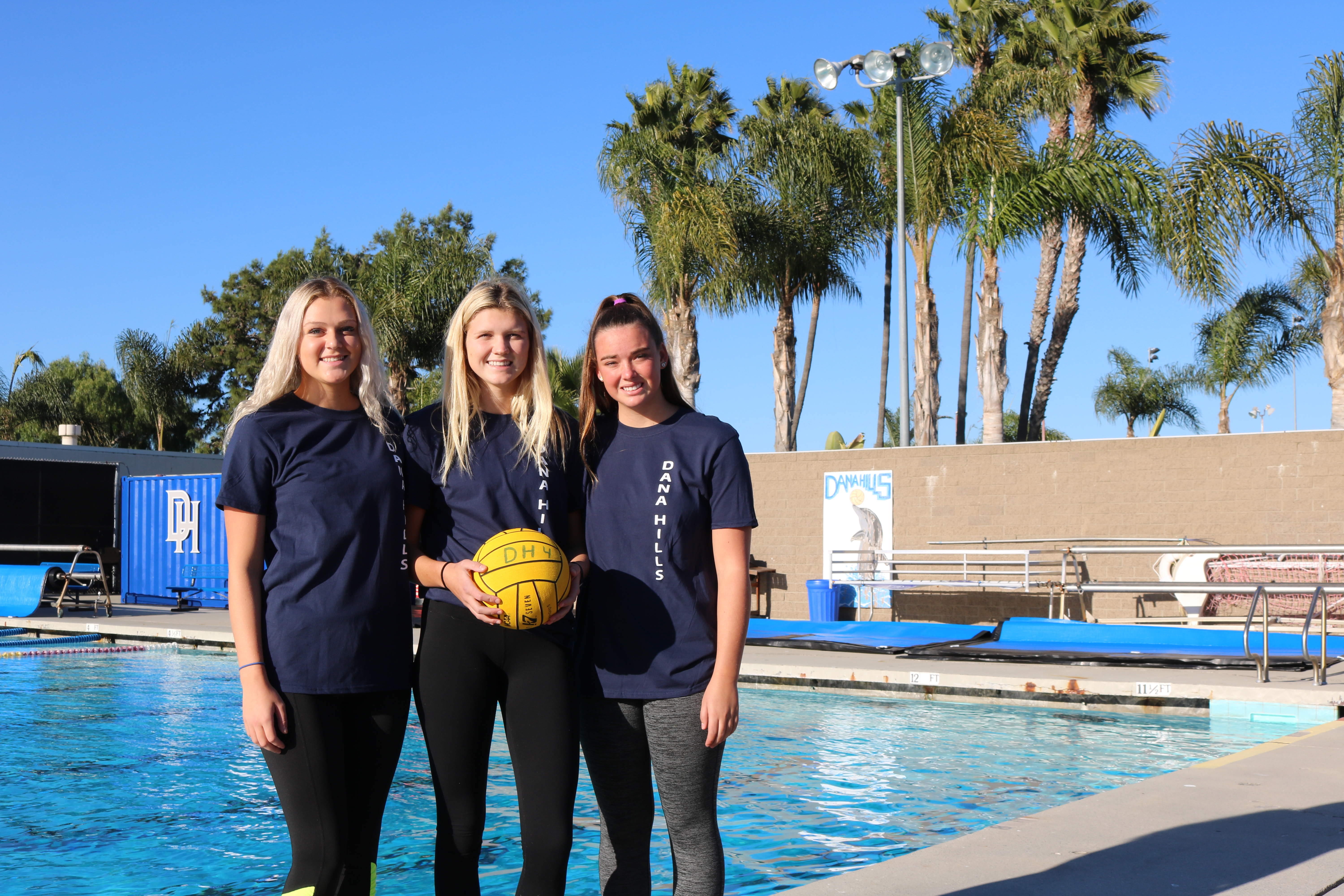 Sydney Baba scored a season-high six goals and six other Dana Hills girls water polo players found the back of the net in a dominating 15-9 South Coast League victory over Trabuco Hills on Jan. 17.

Baba, who leads the team and is fifth in Orange County in scoring, also had one assist and two steals. Lauren Bellavia, Ally Meredith and Sydney Toole each scored twice for Dana Hills (11-7, 2-1 league).

Since dropping its league opener to San Clemente on Jan. 10, Dana Hills has picked up wins over Mission Viejo and the Mustangs to stay in the hunt for the league championship.

The Dolphins will travel to play El Toro on Jan. 23.

The Dana Hills’ girls basketball team’s impressive winning streak was threatened on their home court on Jan. 17 when Laguna Hills showed up for a Sea View League contest. The Dolphins saw a 14-point lead shrink down the stretch, but held on for a 55-51 victory.

The Dolphins got a balanced effort from its lineup against the Hawks on Jan. 17. Three players scored at least nine points, with senior guard Peyton Romo leading the way with 17 points. Laguna Hills’ Kayla Chang scored a game-high 29 points in the loss.

The Dolphins will travel to play a nonleague game against San Clemente on Jan. 21 before squaring off against Trabuco Hills on Jan. 23 in a game with big playoff implications.

Girls Soccer Bounces Back With Win

The Dana Hills girls soccer team picked up its first win in six matches with a 2-0 South Coast League victory over Laguna Hills on Jan. 17.

The Dolphins (5-3-6, 1-2) began league play with back-to-back losses to San Clemente and Aliso Niguel on Jan. 10 and Jan. 12, respectively. Dana Hills was scheduled to host Tesoro on Jan. 19. Results were not available at press time.

Junior guard Reed Romo led all scorers with 15 points, and Troy Brown and Devan Garland each scored 10 to ensure the Dolphins (7-11, 1-1) picked up their first league win of the season.

The win was also the Dolphins’ second in a row, as the team defeated Estancia 53-37 in a nonleague game on Jan. 16.

The Dolphins will host rival San Clemente in a nonleague game on Jan. 21, and resume league play with a Jan. 25 tilt against San Juan Hills.

There was no stopping Laguna Hills’ Ryan Bishop on Jan. 18. The Hawks’ senior midfielder wreaked havoc on the field against Dana Hills, notching a hat-trick in a 4-1 Sea View League victory.

Dana Hills had no answer for Bishop’s three-goal effort, as the Hawks jumped out to a 2-0 lead at the half and extended the advantage in the second. Laguna Hills’ Juan Gomez also scored and had two assists while goalie James Stephens made four saves.