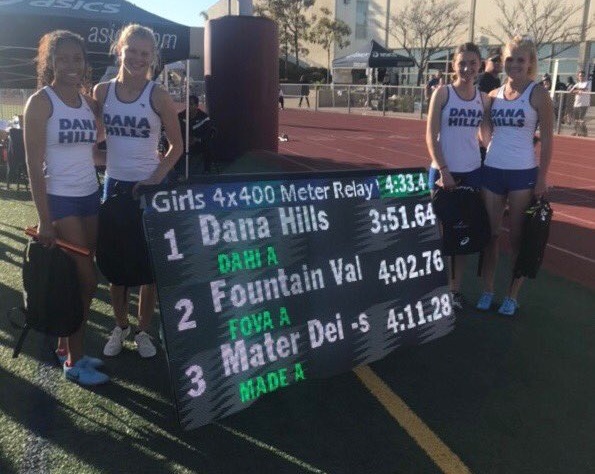 The Dana Hills track and field team is setting its pace early.

The Dolphins are highlighted every week by the performance of their girls 4×400-meter relay team, and it was no different on Saturday, March 16 at the Trophy Invitational at Laguna Beach High School.

The relay team of seniors Hailey Ray and Jaden Haskins and juniors Anisa Rind and Mia Lawrence posted one of the state’s best 4×400 times this season with a scorching 3:51.64. Coach Keith Chambers called his relay team, which broke the Dolphins’ own Laguna Beach meet record, the state leaders, but Dana Hills actually has the third-best time in the event this season.

At the Earl Engman Relays on March 2, Mission Viejo posted the state’s best mark so far at 3:49.50, and Valencia finished right behind with the second-best mark of 3:51.18.

On the boys side, junior Will Riviere set a personal record of 6 feet, 4 inches in the high jump. Riviere took second in the event.

The Dolphins next take on Mission Viejo in an important league dual meet on Tuesday, March 26 before the relay teams head to the Southwest for the Texas Relays in Austin on March 28.

Dana Hills continues to build momentum for the Arcadia Invitational on April 5 and the Orange County Championships on April 13.

The Dolphins (8-3-1) have hit their stride, winning five in a row and seven of their past eight games before taking on Mission Viejo in their league opener on Thursday, March 21. Results were not available at press time.

In the circle, Goetz and junior Madison Wood lead the pitching efforts with ERAs of 1.72 and 1.18, respectively.