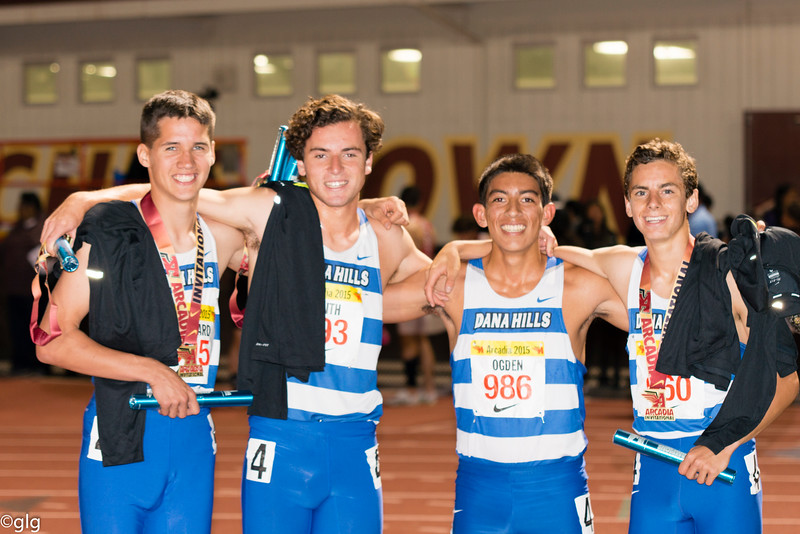 The Dana Hills boys track and field relay teams stole the show in front of a national audience on April 11 at the Arcadia Invitational, setting national-best marks in the 4×1600 relay and the distance medley relay events.

Junior Jake Ogden was the winning anchor in both races for the Dolphins and overtook three runners in the final leg of the distance medley relay to power Dana Hills to a time of 10:06.73 and the win.

In the 4×1600, senior Mason Coppi made a big move in the third leg and at the 12:50 mark, jumped into second place right before handing off to Ogden for the final stretch. Great Oak, who led throughout most of the race, bobbled their baton handoff entering the fourth leg, giving Ogden about a half second to catch up, which he did. Ogden overtook the lead late in the race and the Dolphins posted a winning, school-record time of 17:15.

Dana Hills was set to compete against Capistrano Valley on April 15. Results were not available at press time.

The Dolphins boys and girls track teams will compete in the Mt. SAC Invitational April 18.

Dolphins Lacrosse on the Rise

Last year’s effort by the Dana Hills boys lacrosse team was no failure but the season ended with the Dolphins narrowly missing out on the playoffs.

The team played a difficult nonleague schedule and entered league play with a losing record. The Dolphins were able to bounce back in the Sea View League and go 5-3. They were hoping for an at-large bid and return to the playoffs for the first time since 2013, but it didn’t happen.

Under the guidance of first-year head coach Chris Iltis, Dana Hills is rallying around a team concept that has them sitting at 8-5 overall and 3-2 in league play. The hopes of a playoff berth are very much alive this time around.

Dana Hills’ key to success has been their ability to compete in close games, according to Iltis. The Dolphins have played in six games that have been decided by three goals or fewer, coming away with a victory in four of them.

The margin has been even closer in league competition. The Dolphins’ largest margin of victory was a two-goal win over San Juan Hills on March 27. An 11-10 overtime win over Mission Viejo and a 5-4 overtime win against Laguna Hills followed. The Dolphins lost to El Toro on April 14.

“Playing in those nail biter games but coming away the victor means that we can finish when it’s on the line. We thrive on those situations,” Iltis said. “You don’t always get a season like this with momentum swings and the best part is we are having fun.”

The Dolphins have been racking up wins at the midway point in the season, but that was not the case early on. Iltis said the season started out on rocky footing, as his staff began implementing their system and getting to know the players.

“We started by blaming and not really working as a team,” Iltis said. “Then we started acting like a team and playing for the team, not the individual. They are not allowed to put each other down. We brush off any mistakes and it’s settled the guys down into a more consistent and much more fun team to coach.”

The Dolphins have been getting contributions from all over the field.

Leading the way on offense has been the dynamic midfield duo of senior Logan Perry and junior Colton Brown, who have accounted for 51 points on the season.

Iltis said that senior Tad Thayer is among the team’s more versatile players and can be found at any point on the field at any given time. He is the team’s primary faceoff man, where he has an 80 percent win rate, he can jump into the offense and play defense at midfield. Thayer’s average of 3.6 ground balls per game leads the team.

Senior goalie Jake Harris has logged 230 minutes in net and Iltis said he has been instrumental in keeping the Dolphins in all of those close matches.

The Dolphins were set to travel to play Mission Viejo on April 16. Results were not available at press time. They will host San Juan Hills April 21.

Baseball Stays in the Hunt Following Win Over Tesoro

In need of a win to stay alive in the hunt for a South Coast League title, the Dana Hills baseball team turned to their ace, senior Marrick Crouse, on April 15 against Tesoro.

Crouse, who was tagged for four runs in a loss to Capistrano Valley last week, did not flinch against the Titans. Crouse hurled a complete game, striking out seven while walking two in a 3-2 victory.

An RBI triple by senior Jay Schuyler and an RBI single from Reid Lundeen gave the Dolphins (18-3, 3-2 league) a 2-0 lead in the first inning. Tesoro would respond with a two-run effort in the bottom of the second but Dana Hills collected the go-ahead run in the fifth to take the game.

Dana Hills will finish the season series with Tesoro at home on April 17.