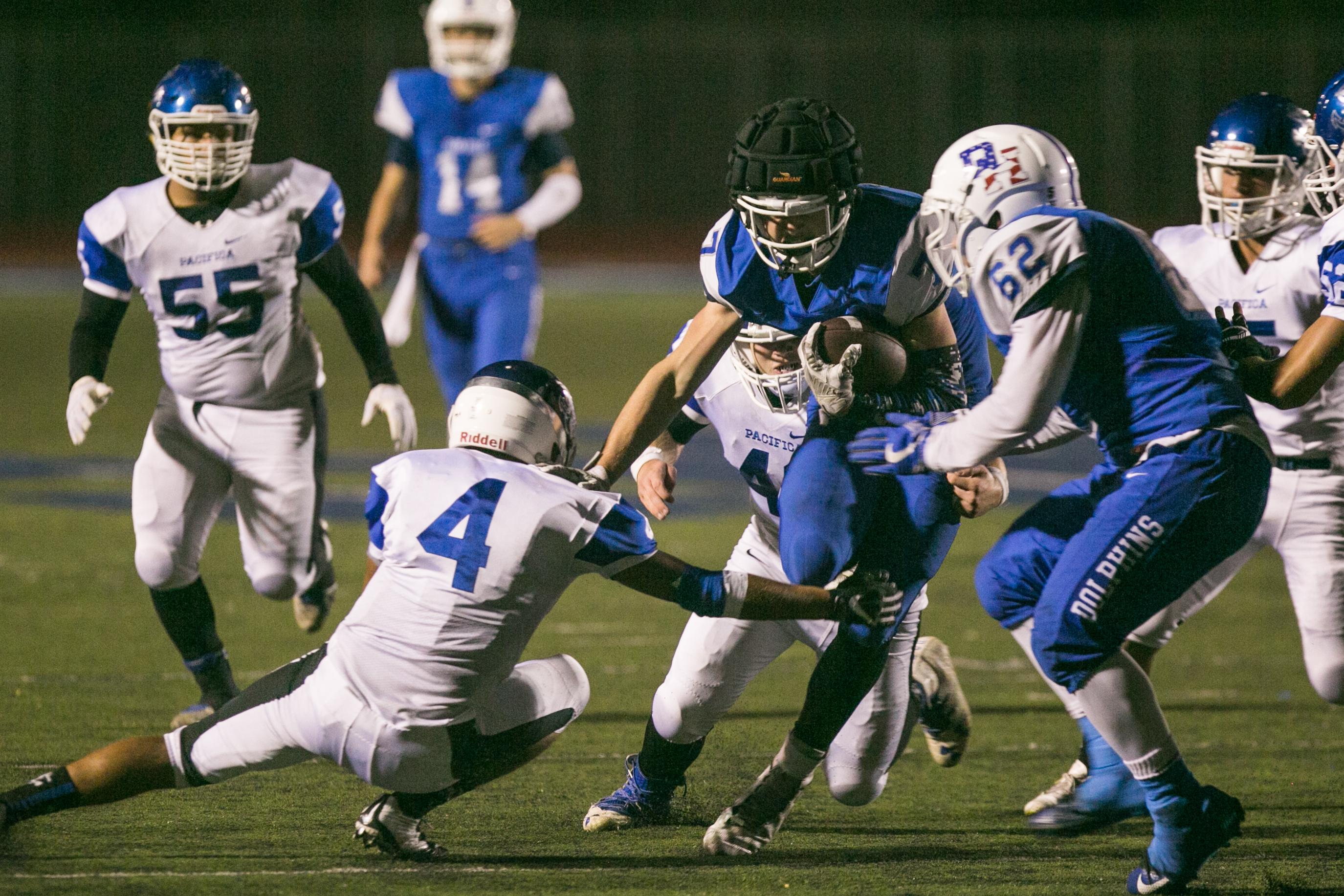 Dolphin Report: Pacifica Too Much for Dolphins in Homecoming Game

Pacifica Proves to be Too Much for Dolphins in Homecoming Game

Despite producing its highest point total in 12 games, the Dana Hills football team could not match up to the firepower visiting Pacifica brought with it on the Dolphins’ homecoming night. The Mariners (1-2) used a balanced attack to push past the Dolphins (0-3), 49-31 on Sept. 9.

Pacifica running back Raul Balderas scored twice on two-yard touchdown runs in the first quarter to take an early lead.

Dana Hills’ Jake Baldiviez capped off a scoring drive for the Dolphins less than one minute into the second quarter to make it 14-7, but every time the home team found pay dirt, Pacifica responded.

Following a touchdown run by quarterback Ben Jefferson and a 36-yard touchdown pass from Jefferson to Matt Moslenko, Pacifica held a comfortable 28-7 lead. Pacifica led 42-17 heading into the fourth quarter.

Although it was a losing effort, the Dolphins had their most productive offensive game of the season. Baldiviez led all rushers with 162 yards. Senior receiver Ryder Lynch hauled in four catches for 77 yards and a touchdown and junior Gavin Pappagalo caught a team-high nine passes for 111 yards and a score. Quarterback Corey Cisowski completed 19 of 39 passes for 236 yards, two touchdowns and two interceptions.

Dana Hills will get another chance to pick up that elusive first win on Sept. 16, when they travel to play Santa Monica (1-2) out of the Ocean League. Santa Monica is led by junior running back Tony Dancy, who is averaging 118 yards per game and has scored five touchdowns. Santa Monica heads into the matchup fresh off a 34-14 nonleague win over Compton last week.

The Dana Hills boys water polo team started its run through the high-profile Santa Barbara Invitational with three straight wins over quality teams. The Dolphins swept aside St. Xavier of Cincinnati, host team Santa Barbara and Righetti, respectively, in pool play. In the Dolphins’ fourth game of the tournament, they came up against a wall in the form of Orange Lutheran, who defeated the Dolphins 17-5.

The loss put Dana Hills in the tournament’s third-place game, but the Dolphins dropped their second straight, an 8-5 loss at the hands of Sir Francis Drake, to close out their tournament run.

Seniors Jack McLaughlin and Kai Hanson had productive tournaments. McLaughlin scored 13 goals, including a five-goal effort against St. Xavier. Hanson scored eight during the tournament and a five-goal game of his own in the Dolphins 14-13 win over Santa Barbara.

Up next for Dana Hills (3-3) is a matchup with rival El Toro. The Chargers battled the Dolphins for the South Coast League title last season, and the two are poised to challenge each other for the championship yet again.

Dana Hills (4-2) and San Clemente were scheduled to play again on the Tritons home course, Bella Collina Golf Club, on Sept. 15. Results were not available at press time.

Dana Hills used two tough nonleague matches against Beckman on Sept. 6-7 to prepare them for a long stretch of league competition. The Dolphins will play matches against league opponents El Toro and Aliso Niguel in the coming weeks.

Volleyball Off to Hot Start

The Dana Hills girls volleyball team started its season off with a bang, defeating rival San Clemente in a nonleague game on Aug. 30. Since then, the Dolphins have been on a roll. Dana Hills (7-3) won three straight nonleague matches before heading into the high-profile Dave Mohs Tournament at Edison High School last weekend.

Dana Hills opened the tournament with two-set sweeps over Santa Barba and Crescenta Valley in pool play. The Dolphins lost to Edison 2-1 in pool play, but advanced to the Division 1 Championship bracket.

Dana Hills was set to travel to play Woodbridge in a nonleague game on Sept. 15. Results were not available at press time. The Dolphins will open Sea View League play on the road against Mission Viejo on Sept. 21.

The Dana Hills girls tennis team finally felt the sting of defeat after starting the season off on a four-game win streak. The Dolphins lost a nonleague match against University on Sept. 13, 12-6.

But the Dolphins’ momentum was only slowed for moment. On Sept. 14, Dana Hills defated Mira Costa in a nonleague match 12-6 to improve to 5-1 on the season. Emilia Gorcyzca and Tatum Phillips won all three of their doubles sets against Mira Costa, as did the tandem of Drae Fresenius and Caroline Halloran.