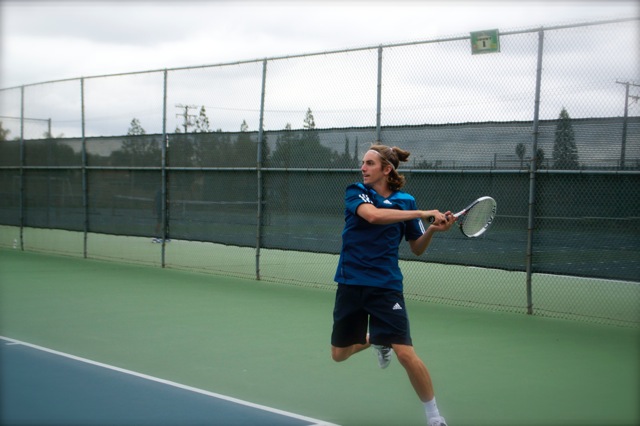 For in-game updates, news and more for all the Dana Hills High School sports teams and community sports news, follow us on Twitter @SouthOCsports.

Senior Chase Masciorini has always been in the mix in the South Coast League and CIF-SS Tennis Individual Championships throughout his high school career. The two-time league champion had advanced to the postseason tournament’s quarterfinals as a junior, and improved on that in 2014 with an appearance in the semifinals.

Masciorini, the No. 1 player out of the South Coast League, defeated Gabriel Rapoport of Malibu High School, 6-1, 6-4, in the second round and breezed past San Marino’s Danny Gealer, 6-0, 6-1, in the quarterfinals to advance to the penultimate match. Masciorini was particularly effective in the quarterfinals match, where he won the first 14 points.

In the semifinals Masciorini came up against Austin Rapp, the No. 1 player from the Desert Valley League and the reigning Ojai Valley Tournament winner. The match was a close one but Rapp ultimately prevailed 7-6, 7-6.

Masciorini is set to continue his playing career at UC Santa Barbara in the fall. He finished his senior season with a 50-2 overall record in singles competition.

Dana Hills sophomore distance runner Jake Ogden capped off a standout 2014 season with a fifth-place finish in the 3,200-meter race at the CIF Track and Field State Championships in Clovis on June 7.

Ogden, who was a member of the Dolphins boys cross country team that finished third in the state meet last fall, posted a time of 8:59.12 in the event, less than five seconds behind the winner Fred Huxham of Redwood High School.

After a successful season that saw them claim the Sea View League championship and reach the quarterfinals of the CIF-SS Division 2 Championships, it’s no surprise the All-League first and second team list is filled with Dana Hills baseball players.

Luke Williams, Jay Schuyler and Marrick Crouse were named to the first team.

Reid Lundeen and Zach Wolf were named to the All-League second team.