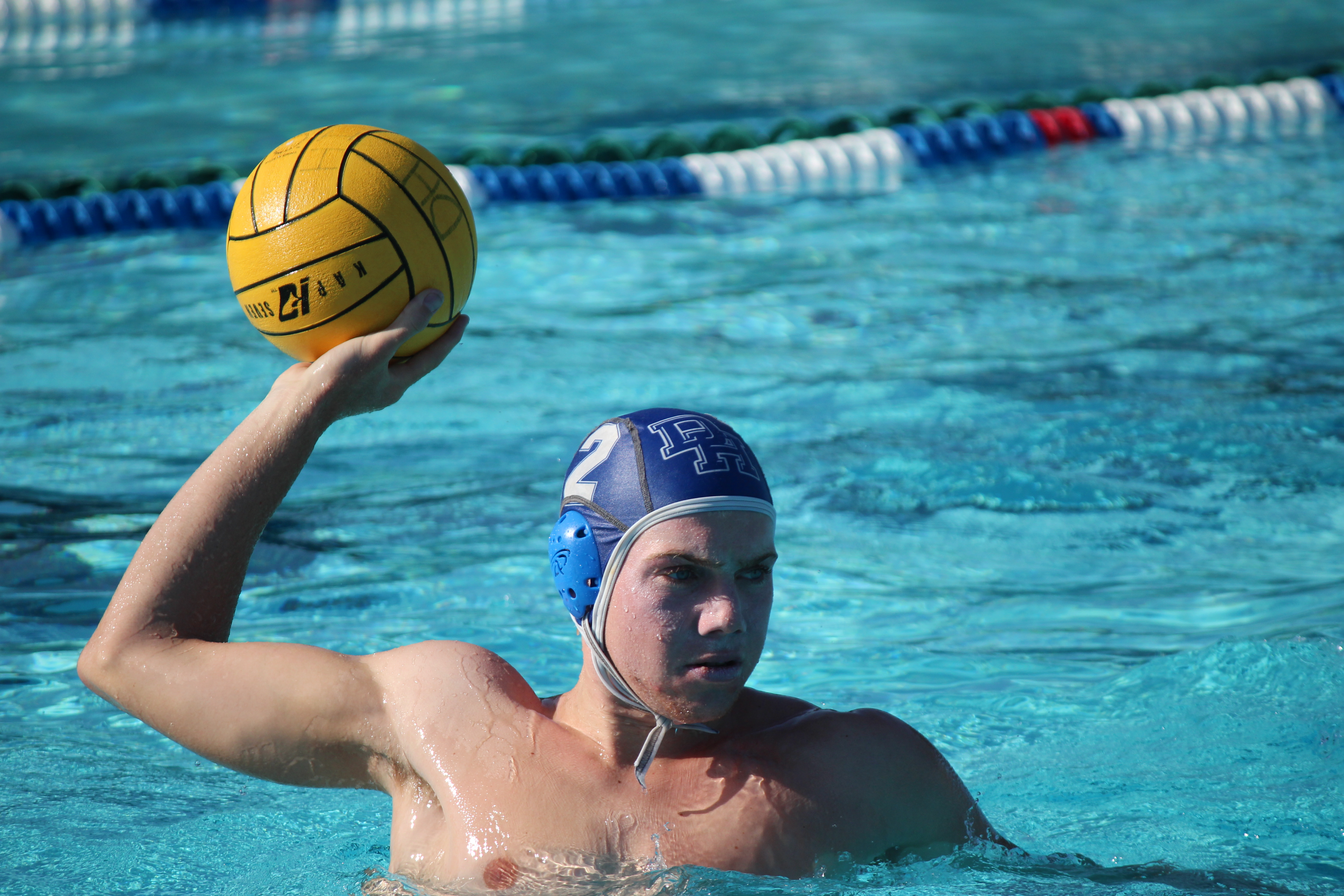 Dolphin Defense Stymies Tritons Water Polo
For most of Tuesday’s South Coast League match between the San Clemente and Dana Hills boys water polo teams, defense was the name of the game. But a third period offensive push by the home team Dolphins, coupled with the play of their goalie, ensured an 11-7 Dana Hills victory.

Dolphins Football Erupts in Fourth Quarter in Win Over Cougars
In what was an offensive shootout the Dana Hills football team came from behind against Capistrano Valley on October 18, erupting for 28 fourth quarter points to propel the Dolphins to a 57-32 Sea View League win.

The Cougars (4-3, 0-1 league) were trailing for most of the first half, but scored 14 unanswered points to take a three-point lead into the final twelve minutes against the Dolphins (4-4, 2-0).

One big Dana Hills play after another soon followed.

Senior quarterback Mac Vail threw a short pass to senior Sean Schulte, who turned what could have been a decent gain into a 58-yard highlight reel play. Schulte’s dash after the catch to the end zone put the Dolphins up 36-32. Capistrano Valley quarterback Matthew Gordon then threw an interception and the Dolphins capitalized. Senior fullback Andrew Dunn scored on a 32-yard burst and, after Gordon fumbled on the ensuing Cougar drive, Dunn caught a five-yard touchdown pass to make it 50-32.

It was a ferocious comeback for the Dolphins, who have grown accustomed to putting up big points lately. In their last three games the Dolphins have outscored their opponents 151-42.

“The offense is really clicking right now. The way we can run the ball is incredible and Vail has a great arm so when we need to throw, we can,” Dana Hills head coach Todd Rusinkovich said.

The Cougars jumped on a Dolphins error after punting away and recovering when the Dolphins botched the catch late in the second quarter. Junior Jordon Bocko ran in a one-yard touchdown on the following drive which narrowed Dana Hills’ lead to 23-17 at the half.

The Dolphins built their lead in the first two quarters behind the power running game of Brian and Justin Scott. Brian had 117 first-half rushing yards and scored a touchdown. Justin had 28 yards and Dunn contributed 21.

The Dana Hills running game was impressive and it was ignited by solid offensive line play. On Brian Scott’s biggest carry of the night, a 39-yard run in the first quarter, 6-foot-3-inch 280-pound offensive tackle Jake Hannah was a full 10 yards out in front of Scott downfield, providing a crucial block. The run set up a four-yard Scott touchdown on the next play. Rusinkovich has praised his line throughout the season and is liking what he’s seeing from his big men.

The Dolphins are on their bye week and will return to play Laguna Hills on November 1. That game will be the Dolphins Honor the Valor game, where they honor military veterans throughout the night.

Dolphins Cross Country at OC Championships
The Dana Hills boys cross country team are steadily building steam down the final stretch of the 2013 season and on October 19, they claimed second-place at the Orange County Championships.

The Dana Hills girls squad had a tight scoring bunch come through at the mid-18 minute mark, propelling them to a sixth-place overall finish. Emma Kao took 16th overall while Christina Wright, Camille Fodor, Lyndsey Cullen and Sienna Serrao all finished within 26 seconds of one another.

Dolphins Girls Tennis Repeat as League Champs
The Dana Hills girls tennis team ran the slate of South Coast League games and as of October 23, held a perfect 7-0 record, ensuring they will repeat as league champions.

The Dolphins defeated El Toro 11-7 on October 17. They were set to play San Clemente on October 24. Results were not available at press time.