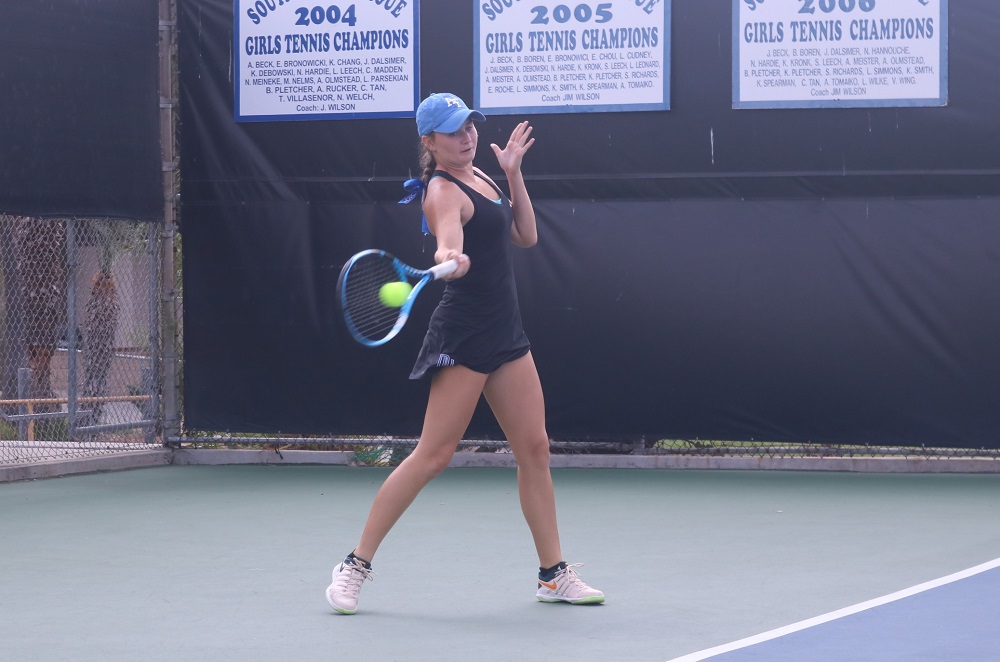 Dana Hills girls tennis sits in first place after the first half of South Coast League play without a blemish on their league record.

The Dolphins (9-5, 4-0) lost their last three matches of the nonleague portion of their schedule, but Dana Hills has rebounded to a four-game league streak.

Dana Hills and San Clemente have shared the last four South Coast League championship titles, but with one win under their belt at San Clemente, the Dolphins can put themselves in position for an outright title as they host the Tritons on Tuesday, Oct. 9.

The first season back in the South Coast League has been a battle for Dana Hills.

With one match to play, the Dolphins (25-5, 4-3) are locked into third place in the league, which will be good enough for a playoff spot in CIF-SS Division 2.

Dana Hills has cleaned house with last-place El Toro. The Dolphins scored two sweeps over the Chargers, including their latest league match on Oct. 3. Dana Hills has also taken down fourth-place Trabuco Hills in both matches, in a home sweep and a five-set road match.

The Dolphins have come out on the wrong end of tight battles against the league’s top two teams, San Juan Hills and Aliso Niguel.

Dana Hills lost both matches in four sets to Aliso Niguel, ranked No. 15 in the CIF-SS Division 1 and 2 combined poll, and dropped their first match to league champion San Juan Hills, ranked No. 8, in five sets at home.

Dana Hills has one regular-season match remaining as they travel to San Juan Hills on Oct. 9.

The Dolphins will look to snap the Stallions’ 26-match league winning streak before the playoffs begin on Oct. 16 or 18.

Football Aims to Get On Track Against Trabuco Hills

Trabuco Hills (1-6, 0-1) is in its first season back in the Sea View League, and like the Dolphins, the Mustangs have had a rough go, which means Dana Hills could be primed for a league win.

Trabuco Hills has lost its last four games and allowed 56 points or more in each of those games. Those have the makings for the kind of jolt the Dana Hills offense needs.

The Dolphins were limited to only eight points against Laguna Hills last week, which came on a 38-yard interception return touchdown by Matthew Lua Mu Poching and a two-point conversion.