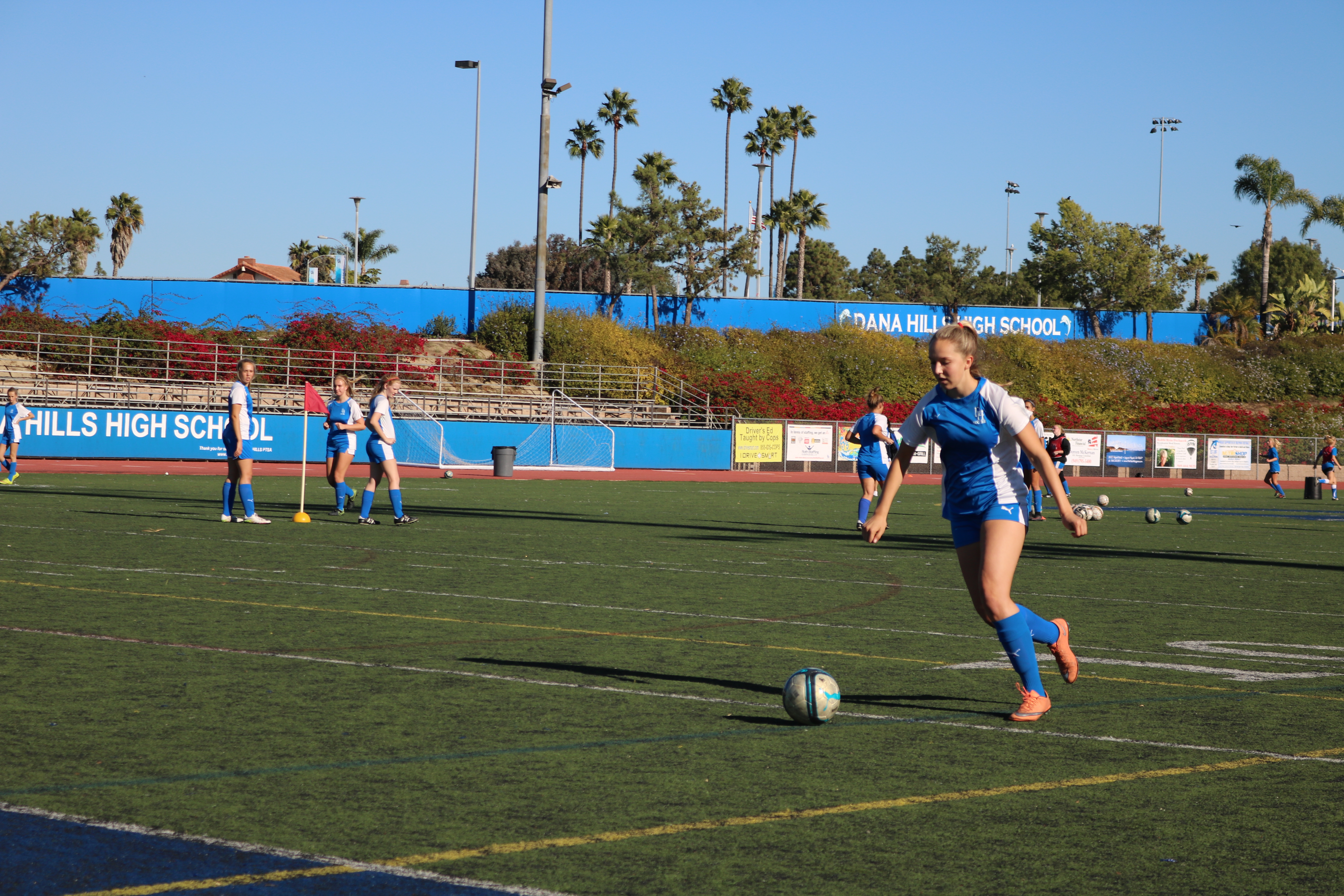 As of Dec. 15, the Dana Hills girls soccer team had yet to feel the sting of defeat.

After notching three consecutive wins over San Juan Hills, Capistrano Valley and Long Beach Wilson, the Dolphins (3-0-3) drew even with Chino Hills 2-2, and had the same 2-2 result with Edison on Dec. 8 and Dec. 10, respectively.

Dana Hills will host Huntington Beach in a nonleague game on Dec. 19 before entering the Excalibur Tournament on Dec. 27.

The Dana Hills boys cross country team has been among the best programs in California for quite some time. As a result of their high finishes at big-time meets (the team most recently notched back-to-back second-place finishes at the CIF-SS Finals and CIF State Championships) the Dolphins were invited to compete at the prestigious Nike Cross Nationals event in Portland, Oregon, on Dec. 3.

Racing against the best high school programs in the nation, the Dolphins placed 14th in the 22-team field.

Boys Soccer Storms Back to Stun Eagles in 4-3 Victory

The Dana Hills boys soccer team trailed Santa Margarita 1-3 at the half on Dec. 14, and the Eagles picked up where they left off in the second half, threatening to increase their lead.

Santa Margarita was awarded a penalty kick early in the second half, but the attempt missed. From then on, the momentum belonged to the Dolphins.

Dana Hills scored three unanswered second-half goals to come all the way back and defeat the Eagles 4-3 in nonleague competition.

Everett Brunelle got things going for the Dolphins in the second half, scoring on a penalty kick to cut into the Eagles lead, 3-2. In the 78th minute, a Mark Garcia free kick went sailing into the Eagles’ box, and it found the head of Dana Hills’ Seth Eisenberg, who flicked it into the goal to tie things up.

Brunelle scored the game-winner in stoppage time, powering home a goal with his left foot off a pass from Kasra Diba to seal the win for Dana Hills.

Dolphins goalie Alan Diaz had 12 saves on the night.

The comeback win marked the second consecutive victory for Dana Hills (2-5-1). The Dolphins beat Marina 2-0 at home on Dec. 7, and have now scored twice as many goals in their last two games than their previous six matches combined.

Dana Hills will host Calvary Chapel on Dec. 16 before entering the Fountain Valley Tournament on Dec. 27.

Zach Stirtz scored 18 and Devan Garland scored 16 as the Dana Hills boys basketball team moved past Garden Grove 66-62 on the road in a nonleague game on Dec. 12.

Like they have benefitted from all season, the Dolphins (1-5) got contributions from up and down the roster in the win. Tony Brown and Harrison Wiese each scored nine points and Cole Slagle chipped in seven.

Dana Hills used a first-quarter push to pick up the win. The Dolphins outscored Garden Grove 19-11 in the first, and took a 36-25 lead into the break. The win snapped a five-game losing skid to start the season for Dana Hills.

The Dolphins will travel to compete in the SoCalPrep Holiday Classic on Dec. 29.

For the second time in as many games, the Dana Hills girls basketball team showed it has the ability to close out close games. Playing in the Ocean View Hawk Classic tournament, the Dolphins defeated Foothill 51-48 in overtime on Dec. 10, one day after closing out Lakewood 42-40.

Peyton Romo led all scorers with 23 points in the win over Foothill, and Maicie Saia scored 15.

Sydney Baba has been on a goal-scoring tear to start her senior season for the Dana Hills girls water polo team. The utility player has played in 12 games and is second in Orange County in goals scored as of Dec. 15.

Baba’s 48 goals trail only Shanna Zuanich of Marina in the county standings, and there is no reason to think Baba will slow down any time soon.

Baba has scored at least four goals in each of the Dolphins’ last four games. She scored six goals twice in that span, against Cerritos and Troy on Dec. 9 and Dec. 10, respectively, and had a five-goal effort against Warren.

The Dolphins (8-4) are also picking up steam.

The team won its first five games of the season, and after some tough losses to top-level competition like La Jolla (Dec. 3) and Santa Margarita (Dec. 6), they found success in the Villa Park Tournament last week. The team defeated Cerritos, Warren and Marina in order before falling to Troy 11-8 on Dec. 10.

Dana Hills will travel to play Long Beach Wilson on Dec. 18 before heading into a showcase tournament at Mount Carmel High School on Dec. 19.