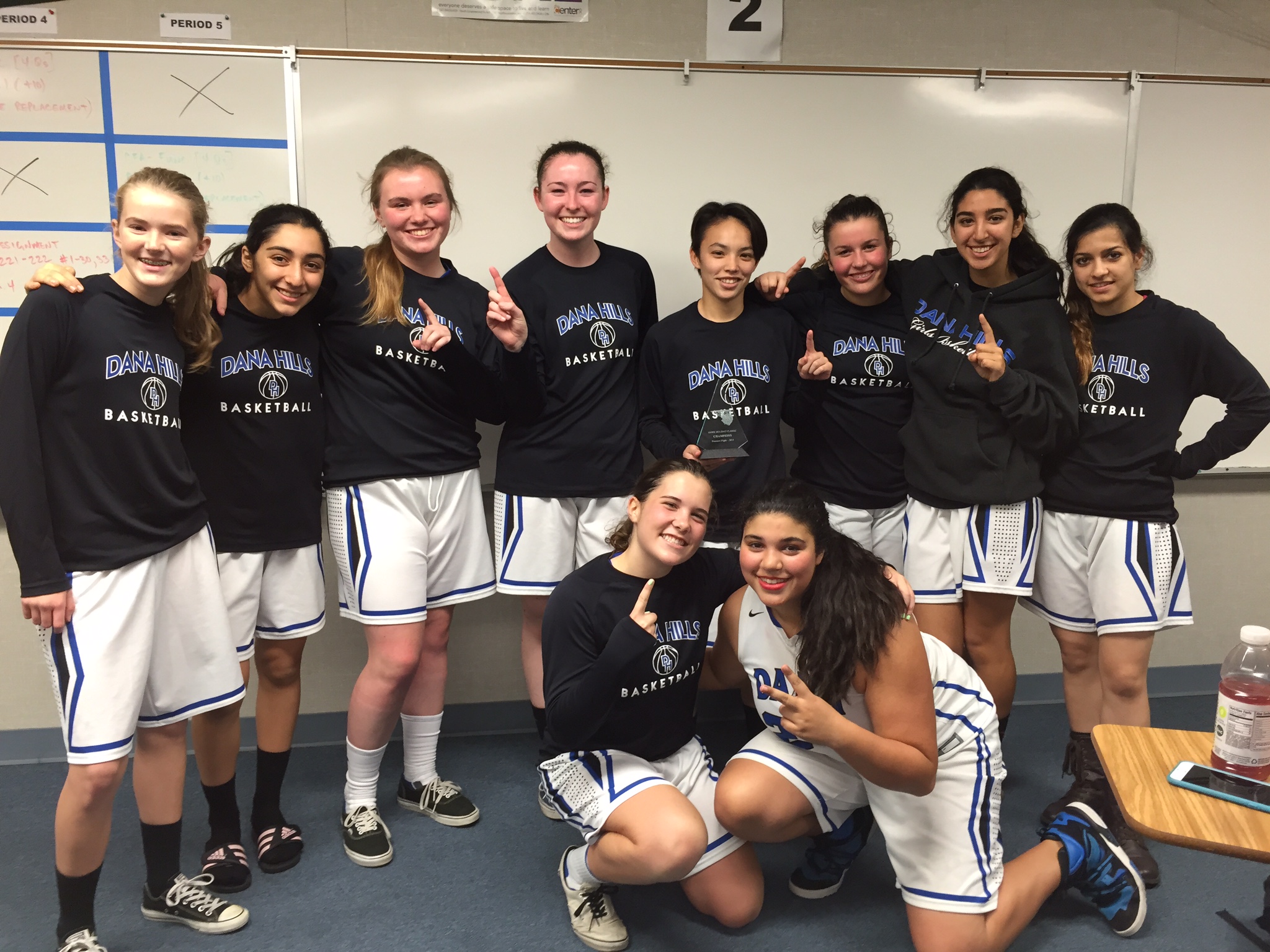 Three consecutive wins vaulted the Dana Hills girls basketball team into the Ocean View Hawk Holiday Classic championship game against Santa Ana Valley on Dec. 13. The Dolphins were led by sophomore guard Reagan Orloff, who poured in a team-high 23 points, in a narrow 45-43 victory to claim the tournament hardware.

Dana Hills’ Kimiko Tanaka was named the tournament MVP while Orloff and Alex Williams were named to the all-tournament team.

The Dolphins run through the tournament began with a 31-19 win over Saddleback and a 39-21 win over Anaheim in the opening rounds. The Dolphins won by comfortable margins but the next two games, including the championship, were much closer.

Dana Hills (6-4) staved off Garden Grove in the third game of the tournament, winning 32-27 behind a 10-point effort by Joy McArthur.

Only 10 games into the season, the Dolphins have already bested last year’s win total of five.

Dana Hills is set to host Rancho Alamitos on Jan. 3.

The Dana Hills boys basketball team ended a four-game losing skid by rattling off back to back nonleague wins over Laguna Hills and Beckman on Dec. 12 and Dec. 16, respectively. But the win streak was halted on Dec. 17 following a 62-59 loss to Esperanza in the second round of the Irvine World News Tournament.

The Dolphins (3-5) began the stretch with a resounding 59-22 win over Laguna Hills. Senior guard Kian Ashoubi and Cole Goudge led the Dolphins with 11 and 10 points, respectively. A giant 20-5 run in the second quarter put the Dolphins up for good.

Senior Parker Romo took control of the offense in a 58-38 victory over Beckman four days later. Romo scored 16 points, knocking down three 3-pointers, while Goudge added 10 points in the win.

Despite outscoring Esperanza 34-27 in the final two quarters of play, the Dolphins were not able to overcome a 35-25 halftime deficit against the Aztecs.

The Dolphins will host Valencia at El Toro High School on Dec. 23.

The Dana Hills boys soccer team has suffered multiple injuries to key players this season and is making the most of a limited roster.

The Dolphins battled in the first half with rival San Clemente on Dec. 10, but ultimately fell 4-1.

The Dolphins were set to host San Juan Hills on Dec. 15 and travel to play Capistrano Valley on Dec. 17. A game against Army/Navy Academy was scheduled for Dec. 18. Results were not available at press time.

Dana Hills has been playing without standout forward Paul Romero, Cameron Kaemerle and Spencer Madden. All three players were slated to start the season but have been nursing injuries.

At the Aliso Cup Tournament the Dana Hills girls soccer team went 1-3 overall, defeating Los Alamitos but losing to Long Beach Wilson in pool play. The Dolphins advanced to the quarterfinals of the tournament on Dec. 13 but fell to Troy, 2-0.

Dana Hills will play Norco in the opening round of the North Orange County Championships at Roosevelt High School on Dec. 27.

The Dolphins (7-5) tournament bid began with back to back losses to Martin Luther King and Huntington Beach. The Dolphins lost the two matches by a combined three goals.

Dana Hills bounced back with a commanding 13-4 win over Mission Viejo on Dec. 12. Maddison Baba led the Dolphins with six goals and four assists.