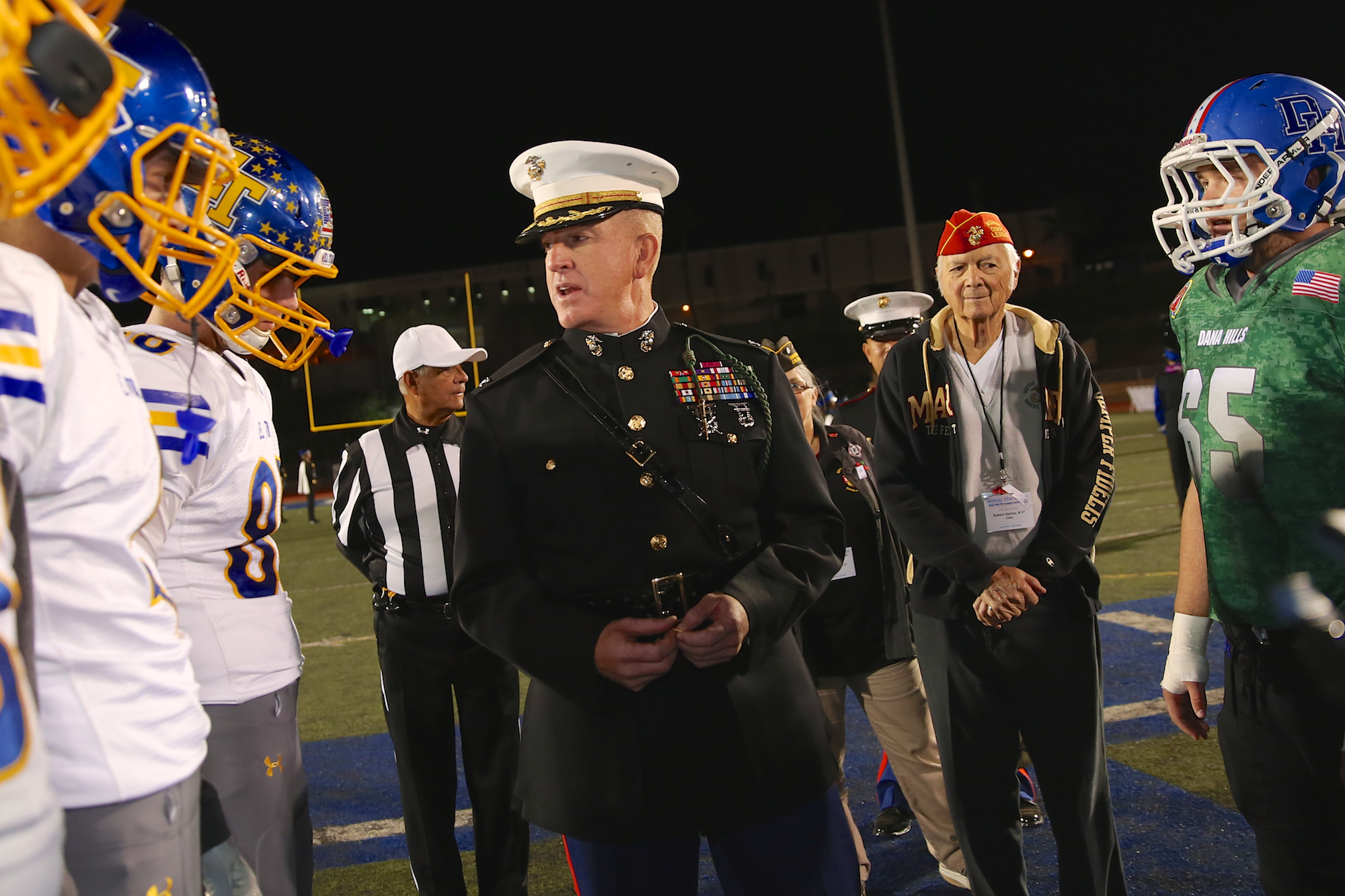 All proceeds raised at the game will be donated to local military veteran organizations such as the Dana Point 5th Marine Regiment Support Group and the Dana point Veterans of Foreign Wars Post 9934. In the three years prior to the 2015 event, the Honor the Valor benefit game has raised over $75,000.

The highlight of the evening came after the game, which visiting El Toro won 63-0, when the Dolphin football players handed their game-worn camouflage jerseys over to the veterans in attendance. Each Dolphin player had the name of a veteran displayed on their jersey.

The Dana Point 5th Marine Regiment conducted static displays throughout the stadium and there was a flyover during the National Anthem. Several active-duty and military veterans were honorary captains and participated in the pre-game coin flip.

To view more photos of the Honor the Valor game, visit www.danapointtimes.com.

The Dana Hills girls tennis team made it to the final four of postseason competition but could not get past Peninsula on Nov. 11 in the CIF-SS Division 1 semifinals.

Peninsula traveled to the Dolphins home court and came away with a 15-3 victory. Peninsula will play the winner of Harvard-Westlake/Corona Del Mar in the finals on Nov. 13. Results were not available at press time.

The Dolphins game wins against Peninsula came in the doubles format, where the tandem of Ayla Fresenius and Claire Swift won once and Tatum Phillips and Dana Mackensen won twice.

The run to the semifinals was a marked improvement over last year’s effort, when the Dolphins advanced to the second round. Dana Hills, which split the South Coast League title with San Clemente this season, paved their way to the tournament’s penultimate match by defeating Fountain Valley, Marlborough and University, respectively.

The Dana Hills boys water polo team was set to open their run through the CIF-SS Division 2 Championships with a first-round matchup against Redondo Union on Nov. 12. Results were not available at press time.

The Dolphins (22-6), the Division’s No. 2 ranked team, are poised to make a deep playoff run. Dana Hills reached the tournament’s semifinals in 2014.

Dana Hills took part in a final nonleague tune-up match against Agoura on Nov. 7 and came away with a 9-5 victory. Agoura ended the season as the No. 8-ranked team in Division 1.

If the Dolphins defeat Redondo Union, they will play the winner of Los Osos/Villa Park in the second round on Nov. 14.

Marymount Defeats Dolphins Volleyball in First Round of CIF-SS

Playing as the No. 3 representative out of the South Coast League, the Dana Hills girls volleyball team lost its opening round to Marymount on Nov. 10.

Dana Hills finished the year with a 9-20 overall record, including a 4-4 mark in league play.

The Dana Hills boys and girls cross country teams appear to be peaking at the right time as they head into the CIF-SS Prelims at Mt. SAC on Nov. 14.

The Dolphins boys and girls teams were recently crowned South Coast League champions at the final league meet of the season at Irvine Regional Park.

If the Dolphin teams advance past prelims, they will compete in the CIF-SS Finals at Mt. SAC on Nov. 21.