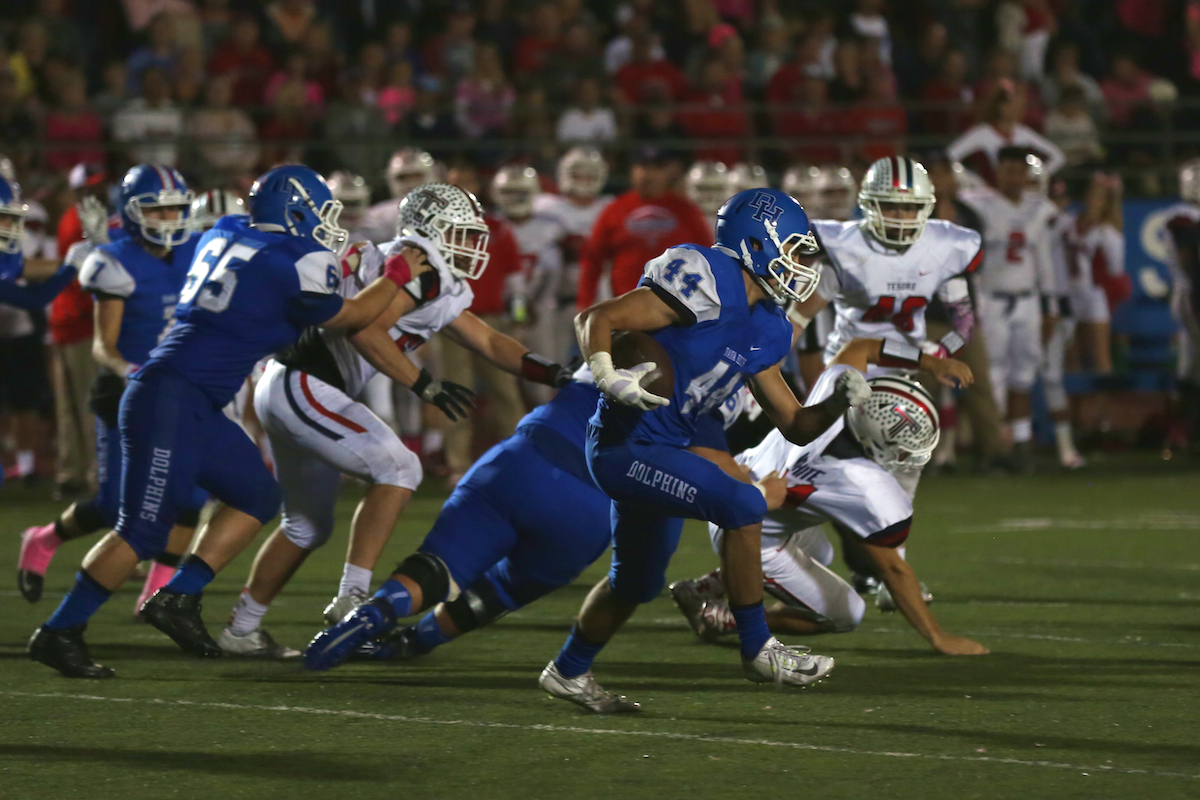 For the fourth consecutive year, the Dana Hills High School football program will hold its Honor the Valor benefit football game on Nov. 6. Proceeds raised at the event will go directly toward local military veteran organizations such as the Dana Point 5th Marine Regiment Support Group and the Dana Point Veterans of Foreign Wars Post 9934.

Roughly 70 combat veterans are scheduled to be in attendance to take part in a pre-game meal and postgame ceremony, which is the highlight of the night. Each Dolphin player will be wearing a custom camouflaged jersey with a veteran’s name on the back of it. At the end of the game, the veterans will take the field and receive their game-worn jersey from a Dolphin player.

In the event’s three-year history, Honor the Valor has raised over $75,000.

The Dana Point 5th Marine Regiment will conduct static displays and there will be a flyover during the singing of the National Anthem.

Cost to attend the game is $10 per person. To learn more about the Honor the Valor benefit game or to donate, visit www.dhfootball.com.

The Chargers will be led by junior quarterback Dawit Wilson, who has thrown for 2,159 yards and 23 touchdowns. Wilson is also the team’s leading rusher and poses a threat to any defense with his ability to scramble out of the pocket. Wilson has rushed for 349 yards and two touchdowns.

The Dolphins have been struggling to score points this year and are averaging 140 passing yards and just 36 rushing yards per game.

The Dana Hills boys water polo team was scheduled to play its final South Coast League match of the season against Mission Viejo on Nov. 5. Results were not available at press time. Whatever the outcome, the Dolphins are guaranteed their fourth straight league title.

The Dolphins will play Agoura, the No. 8 ranked team in Division 1, in a nonleague match on Nov. 7 as a final tune-up before postseason competition. The match will not count against the Dolphins in their CIF-SS rankings.

Dana Hills advanced to the semifinals of the CIF-SS Division 2 playoffs last season and are poised to make another deep run in 2015 given their performance against other top teams in the area.

Senior Mason Coppi claimed the individual crown with a time of 14:43 and was joined at the finish line by senior Jake Ogden (14:45) and sophomore Jack Landgraf (14:47), who finished second and third, respectively.

The Dana Hills girls tennis team had no problem getting past Fountain Valley in the opening round of the CIF-SS Division 1 Championships on Nov. 4.

The Dolphin won the match 13-5 and got a solid performance out of their doubles teams, which won seven out of nine possible points. The doubles tandem of sophomore Dana Mackensen and senior Jacklyn Melkonian swept all three of their sets. The Dolphins went 6-3 in singles play.

The Dolphins entered postseason play as the South Coast League’s No. 1 representative after winning a coin flip over San Clemente to determine the top seeding. Dana Hills and San Clemente both earned a share of the league title, which prompted the coin flip.

Dana Hills will travel to play Marlborough, the No. 2 team out of the Mission League, in the second round on Nov. 6.

After placing second in the South Coast League, the Dana Hills girls golf team headed to Lakewood Country Club on Nov. 2 to compete in the CIF-SS Southern Division Championship. Only the top-3 finishers in the 20-team field would advance to the CIF-SS Team Regionals and the Dolphins could not string together enough low rounds, settling for an 18th-place finish.

The Dolphins shot a collective 469. Junior Joan Soewondo carded the lowest score for Dana Hills after shooting an 81 in the 18-hole event. Soewondo finished in a tie for 26th.

Dana Hills had another successful regular season that featured only two losses. Unfortunately for the Dolphins, who coasted into South Coast League play with a perfect 7-0 record, the two losses came at the hands of league rivals San Clemente and San Juan Hills. San Clemente won the league title and the Dolphins placed second.

Back to back losses to San Clemente and San Juan Hills on Oct. 28 and Nov. 2, respectively, put the Dana Hills girls volleyball team in third place in the South Coast League.

The Dolphins (6-16, 4-4) defeated both Capistrano Valley and Tesoro twice in league play but lost both of their scheduled matches against the Tritons and the Stallions.

The South Coast League awards three playoff seeds to its top three finishers, which means the Dolphins will compete in the upcoming CIF-SS Division 1AA playoffs. The playoff brackets will be released on Nov. 6 at 2 p.m..