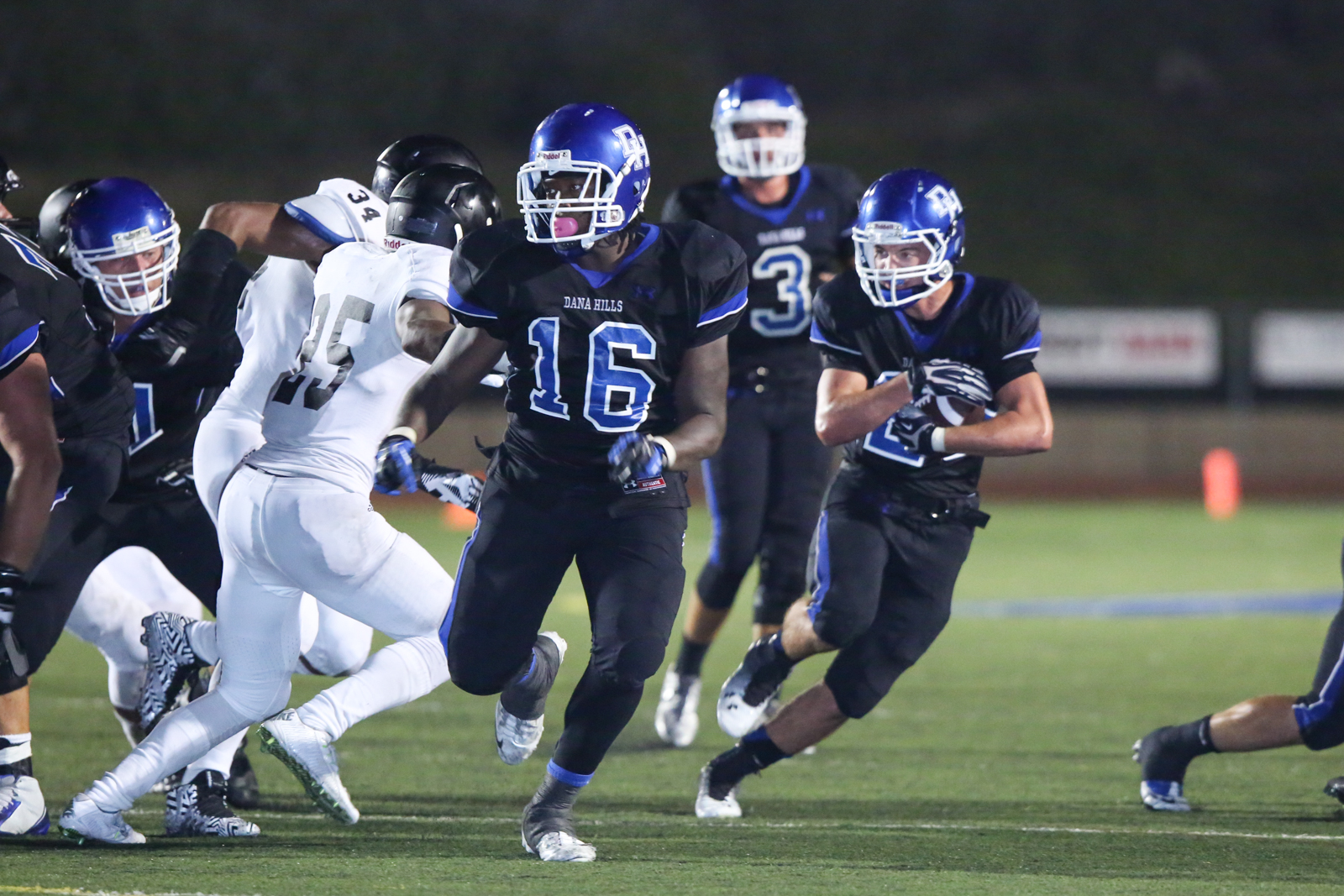 The Dana Hills girls volleyball team will begin their 2014 preseason tournament campaign with an appearance at the Dave Mohs Tournament on Sept. 12. The tournament features several high-profile programs throughout Orange County and will be the Dolphins first true test of the season.

Dana Hills was set to Edison in a nonleague match on Sept. 11. Results were not available at press time.

Dolphins Football Looking to Bounce Back Against Tritons

Whenever the San Clemente and Dana Hills High School football team’s square off, it is an event. The players, coaches and fans have grown accustomed to making the yearly drive to exit off either Avenida Pico in San Clemente or take PCH up to Golden Lantern in Dana Point. It’s a regional rivalry game that, until recently, the Tritons have dominated. Last season the Dolphins beat San Clemente for the first time since 2009.

It is always a game both teams want to win and this year is no exception.

When the two teams square off on Sept. 12 at San Clemente High School, the Dolphins (0-2) will be looking for their first win of the season. So far, Dana Hills has dropped consecutive nonleague games to Tustin and Corona del Mar, respectively.

The Dolphins battled back out of an early deficit against Tustin, failing to score on a last-ditch Hail Mary in the fourth quarter, and were shutout 37-0 by the Sea Kings, the reigning CIF-SS Southwest Division champions, last week.

It’s been a tough two games for Dana Hills. A win against San Clemente would certainly put them back on track.

San Clemente (2-0) comes into the contest red hot, having knocked off Garfield and Huntington Beach in consecutive weeks to start their season.

The Tritons have been led by senior quarterback and USC commit Sam Darnold and the team’s versatile running backs, Vlad Dzhabiyev and Brandon Reaves. San Clemente’s defense is also rounding into shape, after holding Huntington Beach to zero points in the second half of last week’s game.

Dana Hills proved they could compete with San Clemente, even with Darnold under center, in the past. Last season, the two teams exchanged blows in the first half of a closely contested game that saw the Dolphins lead 14-13 at halftime. But just before the half, Darnold broke his foot, an injury which sidelined him for the game and the rest of the season. The Dolphins cruised to a 38-13 victory.

San Clemente wants to extend their winning streak to three games and assert their position among the teams to beat in the area. The Dolphins are looking to get in the win column and jumpstart the remaining portion of their preseason run. The game is set to begin at 7 p.m.

The Dana Hills girls golf team easily swept aside Trabuco Hills on consecutive days to start their season and improved to 2-0.

In their season opening match, Dana Hills was led by Tori Hummel in a 216-236 win at El Niguel Country Club on Sept. 2. Hummel earned medalist honors after carding a 37 (+1) on the front nine.

Hummel led the squad again in the second match at Dove Canyon Country Club on Sept. 3, shooting a 37 (+1) on the front nine in a comfortable 215-227 Dana Hills victory.

The Dolphins were set to host Newport Harbor in a nonleague match on Sept. 11. Results were not available at press time.

The Dana Hills boys and girls cross country teams will start their season at the Laguna Hills Invitational at Laguna Hills High School on Sept. 13. The Dolphins will get their first look at divisional rivals El Toro and San Clemente at the event.

On Sept. 27 the Dolphins will host the Dana Hills Nike Invitational.

The Servite and Dana Hills boys water polo teams were deadlocked at seven goals apiece heading into the final quarter of their Sept. 9 nonleague matchup at Servite High School. The final quarter was a low scoring affair but the Friars were able to pull off a 9-8 victory.

The Dolphins’ Marko Asic, Nick Jansen and Jack McLaughlin each had two goals and goalie Riley Zachary had 18 saves in the loss.

The Dolphins were set to face San Marcos on Sept.11. Results were not available at press time.