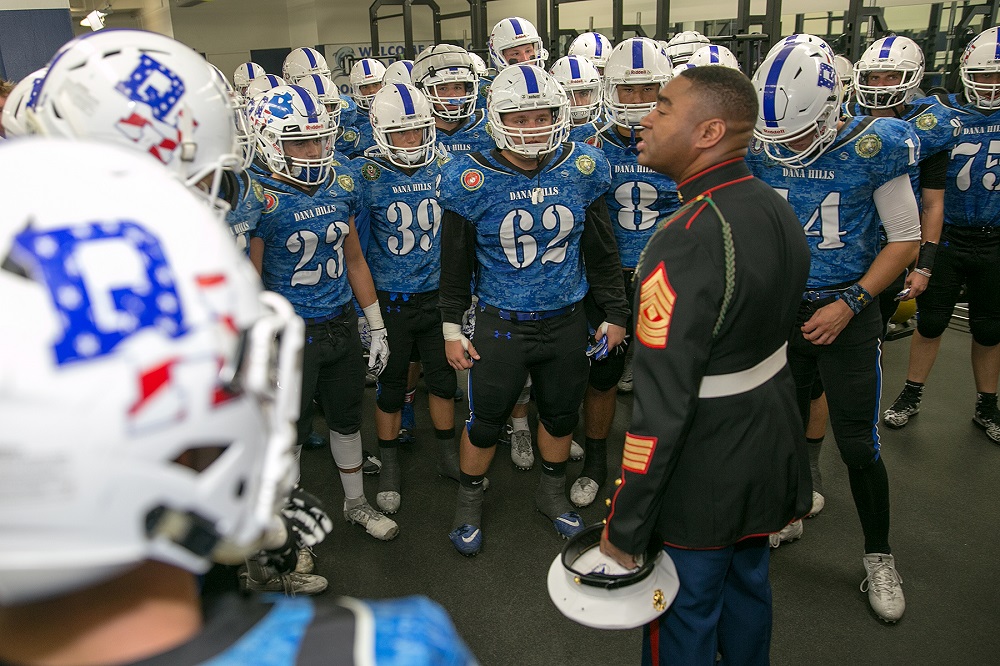 Forty-five combat veterans from World War II to current conflicts will be honored in a series of events leading up to the game against Irvine on Friday night.

The Dolphins will again wear special jerseys where each Dana Hills player will have the name of a veteran on his back nameplate instead of the player’s own name. After the game, the players will present their jersey to their corresponding veteran.

The Dana Point 5th Marine Regiment Support Group and the Veteran of Foreign Wars Post 9934 help to provide support for this event.

On the field, Dana Hills will look to hold off the Irvine Vaqueros. Irvine is winless, 0-3, and has allowed 48 points or more in each of their three losses.

After two big wins, the Dolphins (2-2) are coming off a big road loss to Laguna Beach, 34-8. Dana Hills will look to get back over .500 with a win and match their win total from a year ago.

Dana Hills (2-3) has battled through a tough preseason schedule and is ranked No. 8 in the latest CIF-SS Division 1 poll. The Dolphins’ No. 1 singles player, Courtney Swift, is 12-1 on the season in nonleague, non-tournament play.

Dolphins in the Rankings

The Dana Hills girls volleyball team (13-2, 0-1) come in the combined Division 1 and 2 poll at No. 11. The Dolphins started the season on a hot streak but dropped their league opener to Aliso Niguel in four sets. Dana Hills hosted Trabuco Hills on Thursday, Sept. 13, but results were not available at press time.